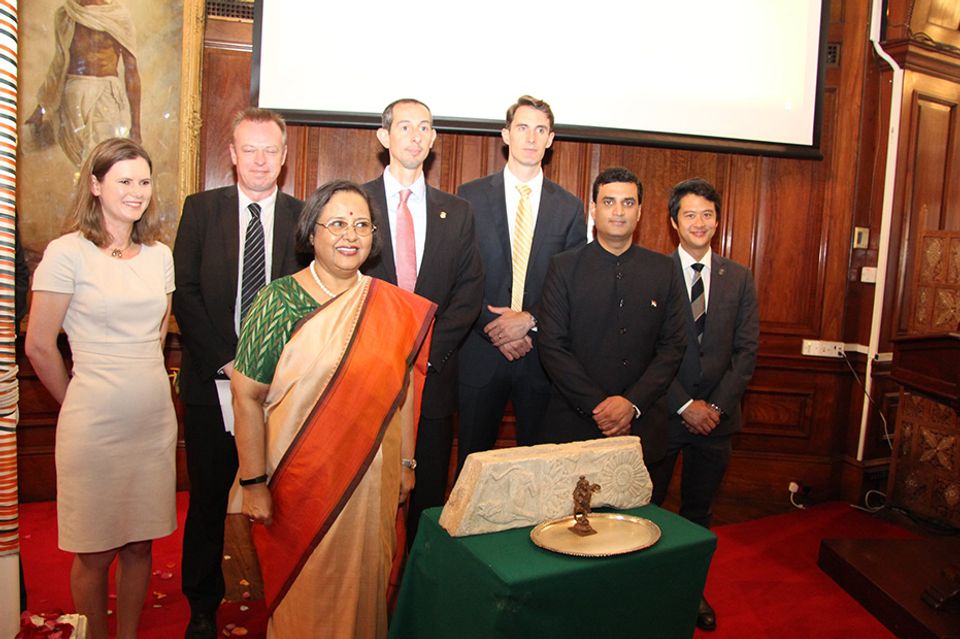 The looted artefacts were returned during a ceremony at India House, London Photo courtesy Twitter/@HCI_London

Two artefacts, linked to one of the world’s largest smuggling rings, have been repatriated to India through a joint US-UK operation.

In June this year an unnamed London-based collector came forward to the US Department of Homeland Security (HSI), “expressing a desire to surrender the pieces”, according to a report released by the US Immigration and Customs Enforcement (ICE).

According to The Hindu newspaper, the collector had bought the objects—a limestone carved relief dated to around the first century AD from the south-eastern state of Andhra Pradesh and a 17th century bronze figure of the Hindu deity Krishna from the southern state of Tamil Nadu—from the New York-based antiquities dealer Subhash Kapoor. Kapoor was charged in July by US officials on 86 accounts relating to the trafficking and selling of cultural items.

Kapoor, described by ICE as “one of the most prolific art smugglers in the world”, has been the subject of a lengthy criminal investigation since 2011. He has been accused of running a smuggling operation through his New York gallery Art of the Past, allegedly dealing in stolen cultural goods worth an estimated $146m over a 30 year period between 1986-2016.

Before he can be tried in the US, Kapoor must first stand trial in India for the illegal export of ancient statues from temples in Tamil Nadu. The antiquities dealer is currently in jail in Tiruchirappalli awaiting his court date.

The return of the artefacts, co-ordinated by the Metropolitan Police, was timed to coincide with celebrations for the 73rd Indian independence day at India House, London. They were received by Ruchi Ghanashyam, the high commisioner of India to the UK. Ghanashyam described the items' return to India as "a warm and friendly gesture by the UK and US agencies," adding, "we cannot put a value on these artefacts; these items are indeed priceless".

In a statement, Peter C. Fitzhugh, a special agent of the HSI in New York, said that "the pieces, like all those recovered through this operation, are stolen fragments of history; and it is an honour to return them to their rightful home country”.

Around 2,600 antiquities have so far been recovered through HSI operations. However, many other artefacts, thought to have been hidden by Kapoor's family members, are still missing.