Stolen Mao Zedong scroll worth $300m found cut in half 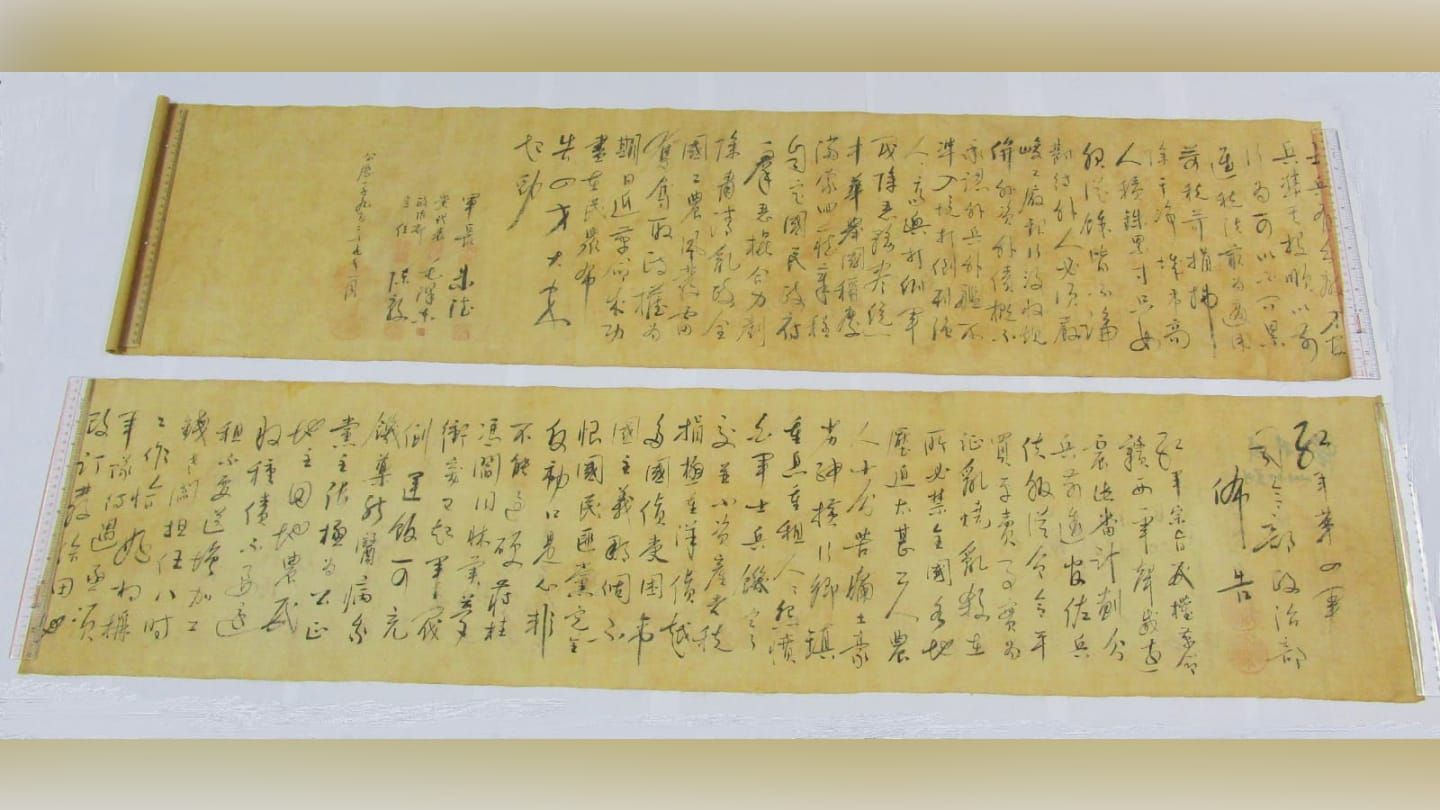 Two pieces of a calligraphy scroll by former Chinese leader Mao Zedong estimated to be worth about $300m were displayed in Hong Kong on Tuesday. Hong Kong Police Force

A calligraphy scroll by Mao Zedong has been found cut in half after it was stolen from a collector’s apartment in a high-profile Hong Kong burglary last month. Estimated to be worth HK$2.3bn ($300m), the scroll was privately resold for HK$500 ($65) to a man who thought it was a counterfeit.

The buyer is one of three suspects arrested so far in connection with the heist, believed to be the biggest burglary in Hong Kong history, according to police. The nine-foot scroll was allegedly cut into two pieces for storage purposes.

Fu Chunxiao, the owner of the scroll and a renowned collector of art and ephemera from the Communist revolution, says he is “heartbroken” by the damage to the work. “It will definitely affect its value, but the impact remains to be seen,” he says in a statement to the South China Morning Post, which first reported the news.

In September, Fu told investigators that about HK$4bn ($645m) in valuables had been taken from his flat in Kowloon after he was informed about the break-in. The collector, who lives in mainland China, uses the apartment for storage.

While the scroll was the most expensive work taken, other notable items stolen in the heist included a Chinese postage stamp printed with the words “The whole country is red”. Issued in 1968, it is one of nine believed to remain; another stamp in the ensemble was auctioned for ¥13.8m ($2m) in 2018, making it one of the most expensive stamps in the world.

Although some of the stolen items have been found, 24,000 stamps and six other calligraphy scrolls have not been recovered, according to the authorities. At least two people connected to the burglary are said to still be at large.

A master calligrapher, Mao Zedong is better remembered as the founding father of the People's Republic of China. One of the most recognised and controversial political figures of the 20th century, he led the Communist Party of China from 1946 until his death in 1976, and launched the seismic and tumultuous Cultural Revolution in 1966.

Although his works have been widely collected throughout China, a calligraphic autograph letter by Mao written towards the end of the Chinese civil war in 1948 appeared at Sotheby’s London last year, making it the first work of calligraphy by Mao to appear at an international auction. It sold for £519,000, well over its £400,000 estimate.