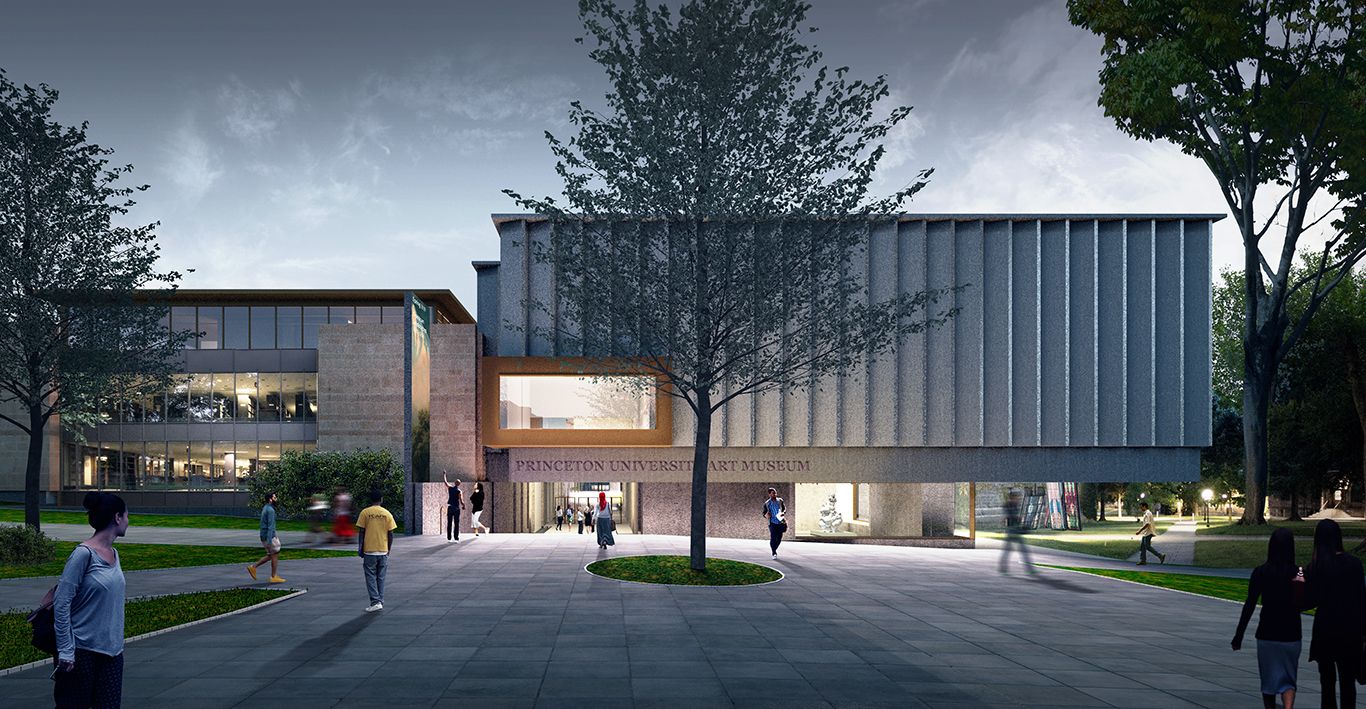 The exterior of David Adjaye's planned Princeton University Art Museum, in which pavilions are interspersed with glass "lenses" © Adjaye Associates

When the Princeton University Art Museum chose David Adjaye to design its new building two years ago, the architect faced a challenge: how could he integrate a vast structure into the center of a campus defined by its history and signature Gothic Revival aesthetic?

His ultimate solution was to “break down the mass” of the planned 144,000 sq. ft museum, Adjaye says, by creating nine interlocked cubes that will relate to the scale of the university structures that surround it.

More intimate spaces described as bronze and glass “lenses” will be interspersed among these pavilions, offering vantage points for contemplating the wooded campus and framing glimpses of the galleries. And six ground-floor entrances will welcome visitors from all directions, making it what the architect calls a “museum in the round”. 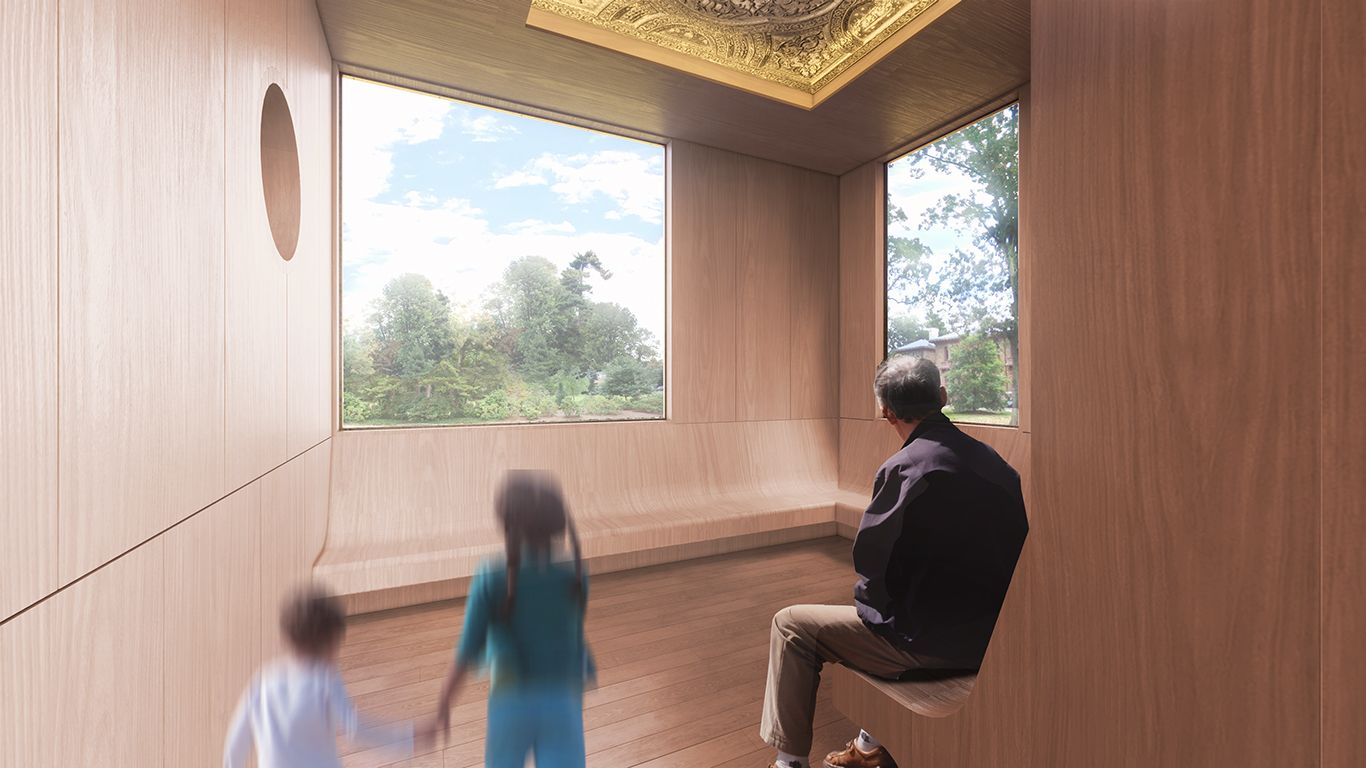 That three-storey design, unveiled today by Adjaye and the museum’s director, James Steward, incorporates a mix of traditional materials—including alternating rough and polished stone surfaces on the exterior as well as the bronze and glass—that speak to the historic Princeton context as well as the university's gamut of other architectural styles.

Yet the building also confronts the contemporary moment in art history and the museum world: all of the galleries will be on the second storey, dispensing with hierarchies between geographic regions and historical periods in the presentation of the museum’s rich and storied globe-spanning art collection.

Demolition of the current museum complex, which Steward describes as “dark and inward-looking” with a “hodgepodegy suite of additions over the years”, is to begin in the middle of next year after asbestos abatement, and the hope is to reopen the new museum in late 2024. With students taking classes remotely this autumn due to the coronavirus pandemic, the current museum building is closed until at least January, and Steward says it is increasingly unlikely that it will reopen before demolition.

Princeton declined to disclose the cost of the project. Steward says that 98% of the funds have been raised and that he expects the building to be fully funded by the end of the year.

“We said to David, give us a building with no fronts and no backs, that presents architecture at its best advantage from every side, that’s about pathways and movement.” James Steward, director, Princeton University Art Museum

Adjaye is of course well known for the imagination he brings to museum projects, having designed buildings in a range of styles like the widely acclaimed National Museum of African American History and Culture in Washington, DC; Ruby City, a new contemporary art center in San Antonio, Texas; and the Museum of Contemporary Art Denver. His new home for the Studio Museum in Harlem is under construction in New York, and he is at work on a design for a Benin Royal Museum in Nigeria that would unite restituted artifacts.

He was well acquainted with Princeton when he set out on its museum design, having served as a visiting professor at its School of Architecture from 2008 to 2010. Steward described him as a “really careful listener” who immediately grasped the museum’s need for a building that was less inward-looking. “We said to David, give us a building with no fronts and no backs, that presents architecture at its best advantage from every side, that’s about pathways and movement,” he says.

Part of Adjaye’s solution was the creation of two enclosed “art walks” on the ground level that run north-south and east-west through the building’s ground floor, connecting to pathways outdoors and also offering tantalising views of galleries on the building’s second level. Plans call for these interior streetscapes to have extended hours, allowing students to stroll through these avenues until well into the evening, when the museum is closed. “It’s a way to weave the experience of being on campus into the museum,” the architect says. 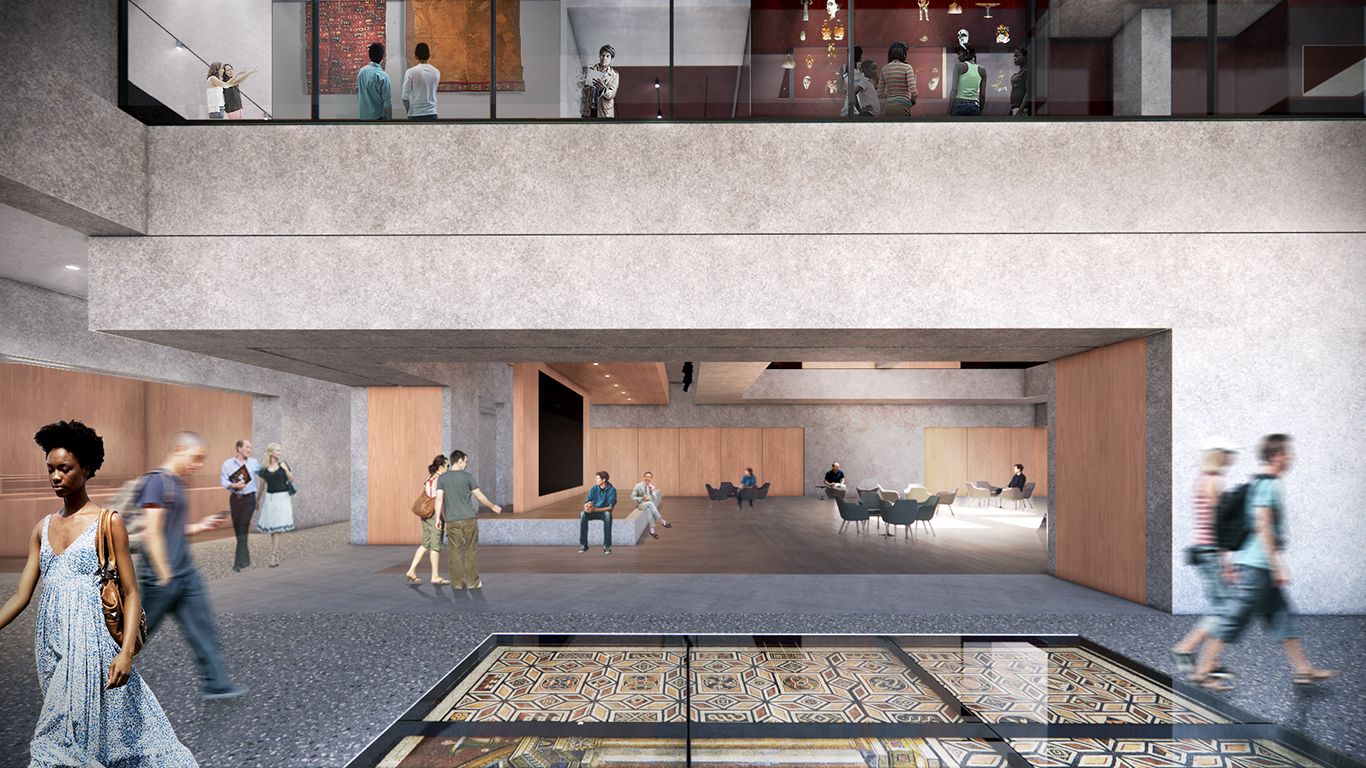 A rendering of part of the north-south “art walk”, which will provide views into the grand hall as well as encounters with works of art embedded in the floors and glimpses into the galleries above © Adjaye Associates

Curators weighed in significantly on the decision to put all of the art galleries on the second floor, Adjaye says. “The strategy is to democratise the collection away from its current condition of hierarchies up and down.”

“Like at most museums, European art was always the premier thing,” he says. “They had extraordinary collections like American Indian in a far corner. Now it’s at the heart of the museum.”

The museum’s Art of the Americas holdings are unparalleled among American university collections, Steward notes, and the museum plans to bring “native voices to the table, helping us to think about everything from ownership to interpretation of such materials”.

Galleries will alternate in volume to accommodate the richly varied collection areas, and Adjaye says that each one will have a personality: “We don’t want a white box, where everything is against a white background.”

“We really want to have a very atmospheric museum,” he adds. Varying tonalities and patterns will unfold through the use of fabric lining, different paint hues or possibly wallpaper—“all those options are open.” Steward says the threshold of each gallery will be articulated to beckon to visitors.

The director says that while each of the museum’s nine cubes, seven of which are primary pavilions, will be anchored by certain art historical periods and geographic clusters, the curatorial ethos will “be much more about issues of exchange, contact and cross-cultural influence—“moments when, for example, Japan and Europe come into contact with each other”.

Similarly, “you may be on your way to see our really glorious Chinese painting collection, but as you make your way there, you have no choice but to come into contact with, let’s say, the ancient Mediterranean world, which is not without relevance given what ancient trade routes have to say,” he says. “It’s really about shaping this set of narratives that we think are much more appropriate to the 21st century.”

In addition to the museum galleries, the building will incorporate a home for the university’s department of art and archaeology and a grand hall, numerous classroom spaces, seminar rooms, creativity labs and a rooftop café. 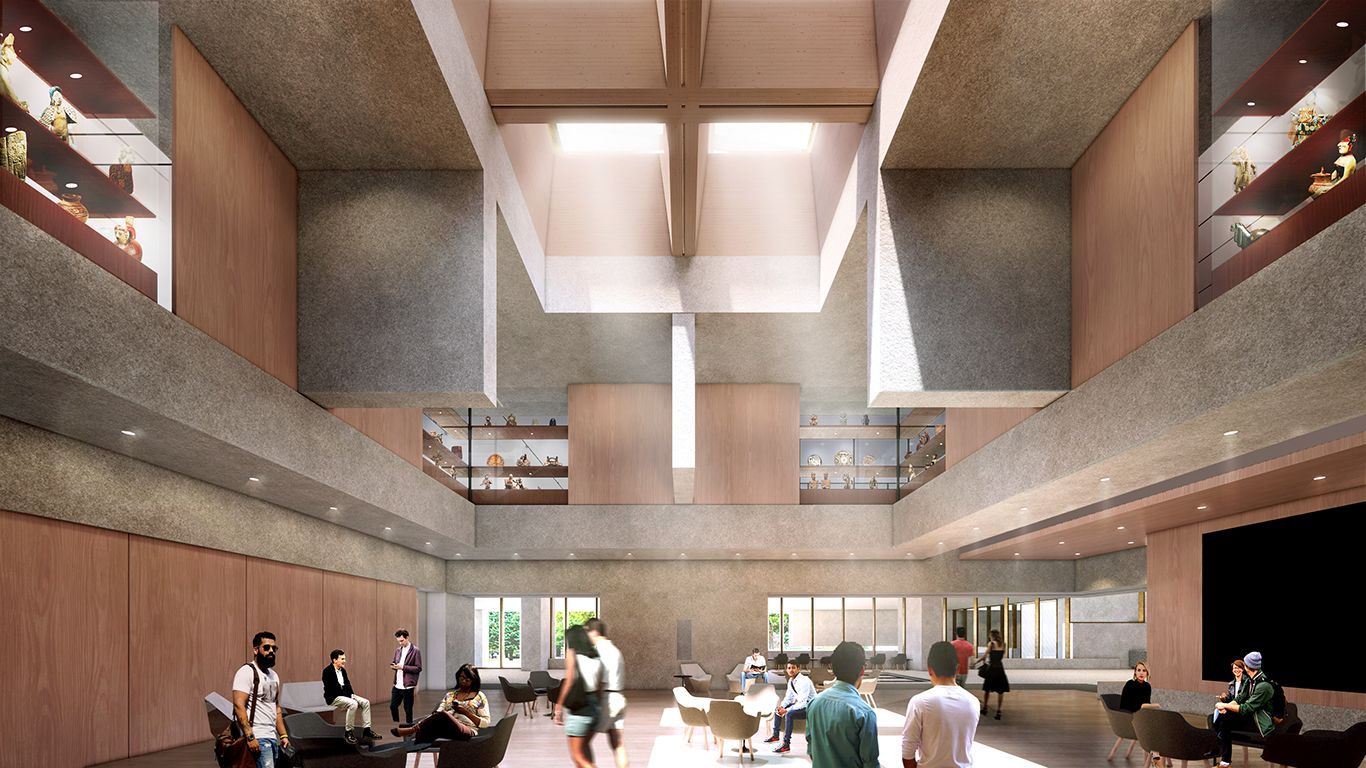 A rendering of the planned Princeton University Art Museum's double-height grand hall, which will function as a lecture and performance space © Adjaye Associates

The museum component will nearly double from its size in the current building, Steward says. He predicts that the percentage of objects on view from the permanent collection will triple from 2% to 6%—not a striking statistic, he acknowledges, but it does not account for the stored art that will be available to scholars and students for perusal.

“Everyone immediately assumes that the growth of a museum is in the growth of the galleries only,” Steward says, “but we’re devising some new strategies to make visually accessible the storage of the collection”. Elements of visible storage will be featured throughout the building to intrigue visitors, and scholars will be encouraged to make appointments for viewings.

Although the design of six entrances and exits and multiple circulatory paths predated the onset of the pandemic, the director adds, they “are going to serve us very well in the days of Covid, and post-Covid hopefully.” So will its advanced air filtration systems.

Such components will afford us with some real advantages,” Steward says, “as will the fact that the gallery spaces are so volumetrically large." 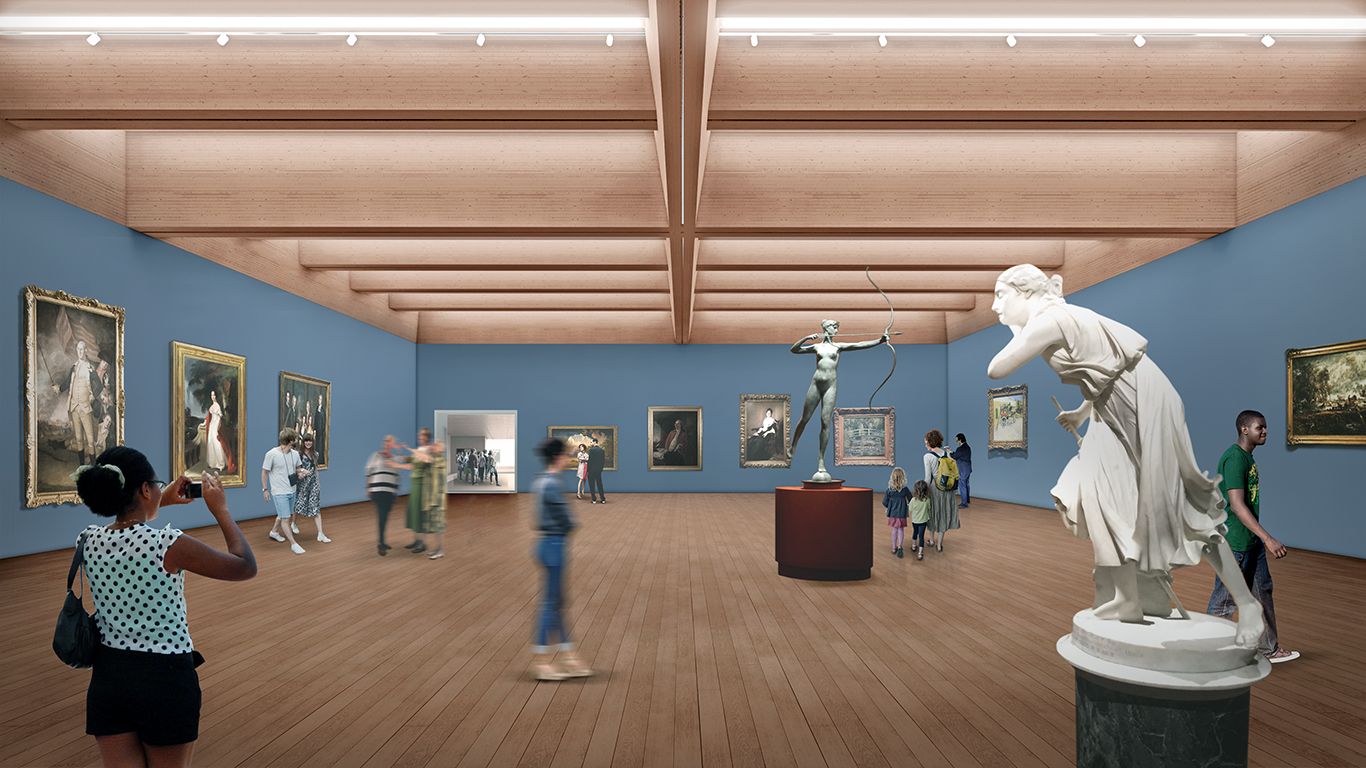 “Even if, God forbid, we find ourselves in another Covid-like moment once this building is built—I say that hoping, of course, that Covid is a historical event by then—social distancing will be more plausible than in the rather small galleries of the present building,” the director adds.

Ultimately Adjaye hopes that students will come to see the museum's new home as “an old friend”.

“I want the building to feel that it’s not just a hall of sacred objects but as though as if it’s a common hall, so students can just go there if they feel like it and want to work close to those objects,” he says. “If they have a compelling urge to see an incredible print or a sculpture or a delicate ceramic or bronze piece, it becomes a resource.”