With the spectre of a government crackdown on dissidents looming in Russia, Turkey and elsewhere, the Museum of Modern Art (MoMA) in New York has acquired a key document of one artist’s incarceration: Ibrahim El-Salahi’s Prison Diaries (1976).

In 1975, after a failed military coup in Sudan, the prominent African Modernist was falsely accused of anti-government activities and was sent, without trial, to the notorious Kober prison in Khartoum. He spent six months and eight days in a cell with ten others, and risked solitary confinement by sketching on paper scraps that he had to hide in the dirt from the guards.

The harrowing ordeal led El-Salahi to create the diaries while under house arrest after his imprisonment. He says: “It is one of my most treasured works.” 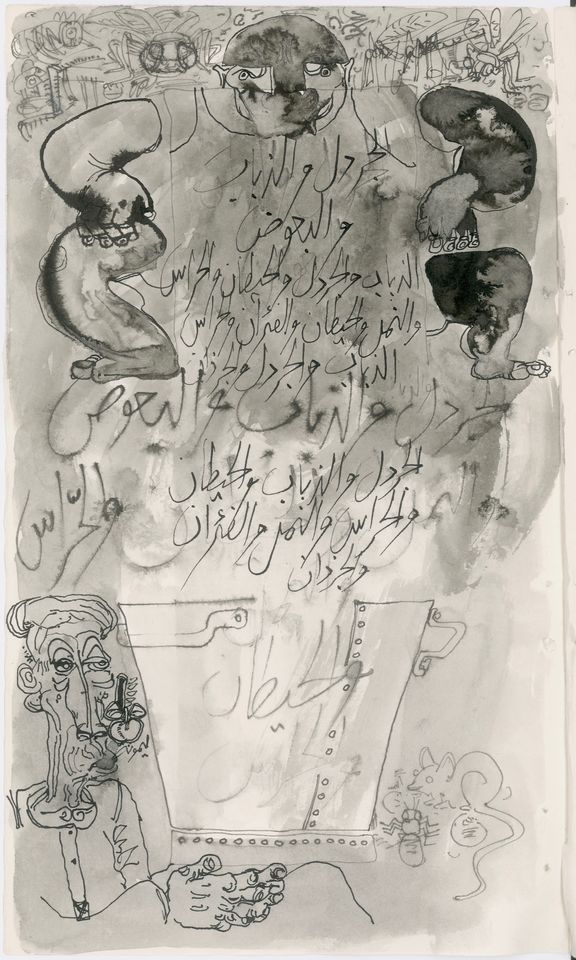 A sea of faces behind bars: a drawing from El-Salahi’s Prison Diaries (1976) (Photo courtesy of Vigo Gallery)

The 37-part series includes drawings and texts that recall life in prison. They show scenes such as birds caught in nets, a sea of faces crammed behind bars and a heavyset man squatting over a bucket. The diary marks the moment El-Salahi began to produce groups of works in black and white, starting with a single, central image and adding further sheets of paper in the same way he had worked covertly in prison. “All that came after was influenced by this turning point in my life,” says El-Salahi, who left Sudan in 1977.

The 86-year-old artist only recently released his more important works for sale, with the Tate, the Solomon R. Guggenheim Museum, the Metropolitan Museum of Art and the Sharjah Art Foundation acquiring pieces. “We have been asked repeatedly over the past few years whether Ibrahim would part with the Prison Diaries and it has never been for sale,” says Toby Clarke, the director of London’s Vigo Gallery, which is showing El-Salahi’s work at the 1:54 Contemporary African Art Fair (Pioneer Works, Brooklyn, 5-7 May), including a rare drawing from his Alphabet series priced at $83,000.

El-Salahi changed his mind after Sarah Suzuki, MoMA’s curator of prints and drawings, visited the artist at his home in the UK last year.

The acquisition is timely given MoMA’s recent decision to rehang part of its permanent collection with works by artists from nations such as Sudan, whose citizens have been affected by Donald Trump’s immigration ban. El-Salahi’s The Mosque (1964) is currently installed opposite Picasso’s Demoiselles d’Avignon (1907).

“I first met Alfred Barr [MoMA’s then director] in the mid-1960s, when the museum acquired The Mosque, and I am very happy that my Prison Diaries have found a new home there too,” El-Salahi says.