The 100ft-tall sculpture is still standing after a major blaze, but crews will determine if it can remain in place 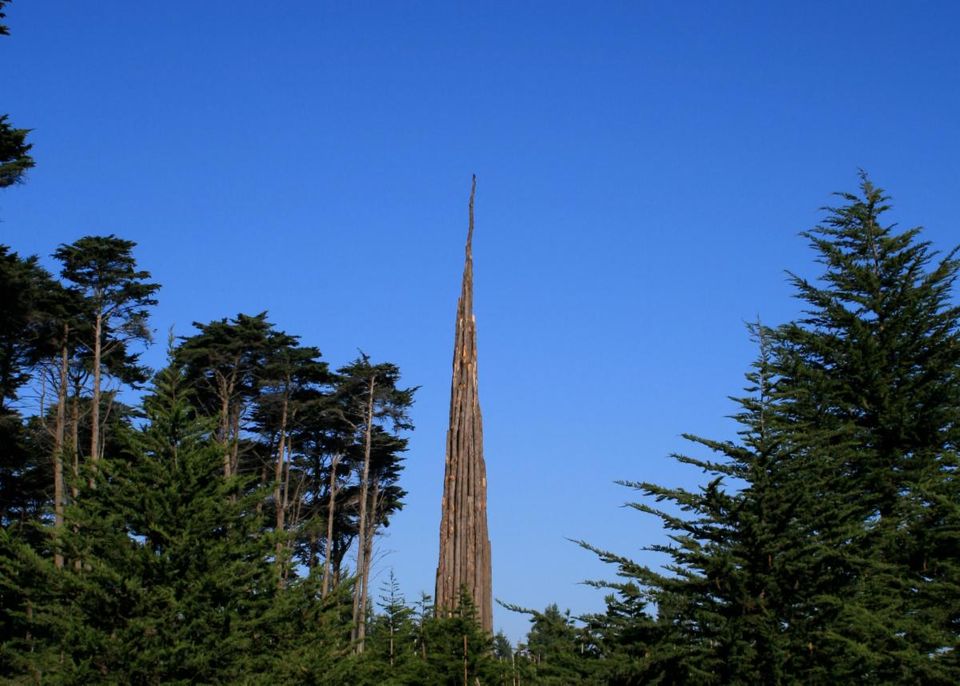 Andy Goldsworthy’s towering Spire sculpture in San Francisco’s Presidio national park was severely damaged in a suspected arson during the early hours of Tuesday morning. The 100ft-tall work, built from the trunks of 37 Monterey cypress trees and installed in 2008, is structurally sound according to Haines Gallery, which represents the artist, but forestry crews will determine if the piece can remain in place.

"The burning of Spire goes too deep for my own words,” Goldsworthy says in a statement released by Haines Gallery. “Besides, Spire has always spoken for itself and will perhaps now speak with an even greater eloquence after what has happened. If anything, its epitaph will be better written in the memories, thoughts and words of those who have lived with it over the past twelve years.”

Spire was created using trees cut down as part of a major reforestation effort, and the was meant to be engulfed by the new saplings planted around it. “An iconic and inspiring presence in the landscape, Spire became a symbol that speaks to the past, present, and future of its site, a beloved destination for so many visitors, and an emblem of what art can bring to our national parks,” Cheryl Haines says. Goldsworthy later created 3 more works for the park, making the Presidio the largest public collection of his art in North America.

The “Spire” sculpture by Andy Goldsworthy is seen burned from a Tuesday morning fire at the Presidio Golf Club.

“I find the damage to Spire due to fire particularly distressing during our present moment, at a time when we are collectively finding solace in nature,” Haines adds. “Though this monumental work was intended to have a life span and ultimately be overtaken by the forest, its story should not end like this.”

City officials say the blaze, which was contained by fire fighters to a one-acre area, is still under investigation, and Battalion Chief Glenn Kircher told The San Francisco Chronicle that he doubted that the fire was politically motivated, despite damage done to statues in the city. “We are devastated that this invaluable piece of art has been damaged, and we are still in the process of determining if it can be saved,” a spokeswoman for the Presidio Trust told SF Gate. The artist is asking for anyone living in the area who has any additional photographs or video, to share them at art@hainesgallery.com.

“Like many things happening at this time, the burning of Spire doesn’t make any sense,” Goldsworthy adds. “What I do know is that art doesn’t give up. It is resilient and fights back. It is part of our collective and personal hard-won immunity. Spire is still standing and is still very beautiful. It is now more rooted in the place than ever before. It will always stand there—even when it has been removed.”