UPDATE (31 August): The press office of the Pushkin State Museum of Fine Arts in Moscow has confirmed to The Art Newspaper that its specialists are not working on the restoration of artefacts from Palmyra. 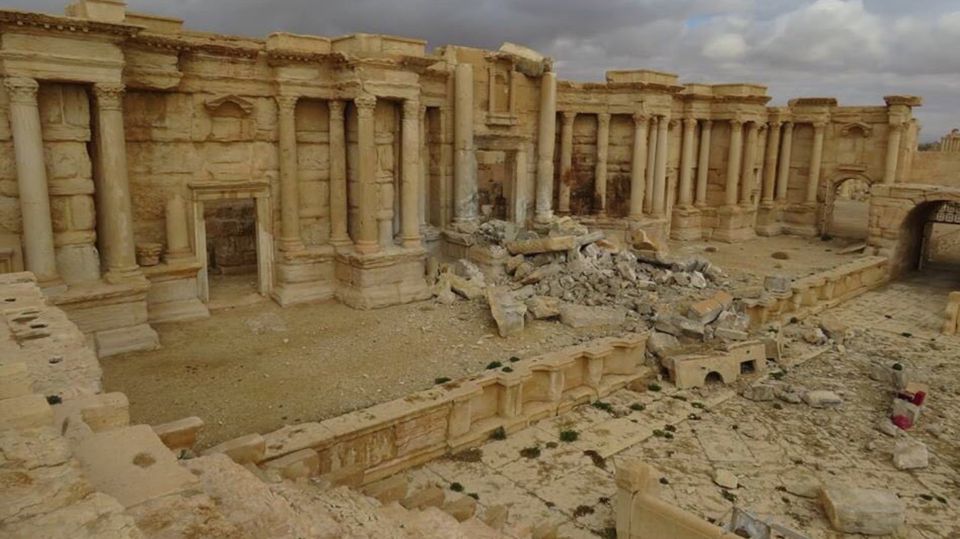 Damage caused by Islamic State at Palmyra's Roman theatre after the city was retaken by Syrian and Russian forces in March 2017 Syrian Ministry of Culture, Directorate-General of Antiquities and Museums

Syrian museum workers are consulting with Russian specialists on the restoration of statues from Palmyra, the ancient city that has been liberated twice from Islamic State (IS) since 2015, according to a news report circulated by the Russian defence ministry last week.

The report by the state-run Ria Novosti news agency quotes Mohammed Khalid al-Asaad, the director of the laboratory of the National Museum of Damascus, as saying that the consultants are from the Pushkin museum in Moscow.

“The work is very difficult,” he said. “The terrorists broke the sculptures into many pieces and we are putting them together literally piece by piece.” The Russian specialists are “giving advice on restoring mosaics and fine details of the cultural treasures,” he added. “This is very important assistance.” The National Museum, which has been closed during the war, is soon due to reopen.

The Tass news agency identified the consultants as being specifically from the Pushkin State Museum of Fine Arts (there is another state museum in Moscow named after Alexander Pushkin, the 19th-century poet). When contacted by The Art Newspaper, the press service of the fine arts museum declined to comment due to the summer holiday. However, Vladimir Tolstikov, the head of the Pushkin’s department of art and archaeology, spoke in 2016 about travelling to Syria for museum consultations.

Mahmoud Hammoud, Syria’s director general of antiquities and museums said that Unesco had not yet come through on its earlier promise to support the restoration of Palmyra, which was retaken by the Syrian army with Russian military support in March 2017.

Efim Rezvan, the deputy director of the Peter the Great Museum of Anthropology and Ethnography (the Kunstkamera) in St Petersburg, told Radio Sputnik: “Palmyra has for many bureaucrats become, unfortunately, a rather toxic word—first of all in connection with the victory of the Syrian state.”

Mohammed al-Asaad, the director of the museum in Palmyra, whose father, Khaled, had run the Unesco World Heritage site and was beheaded by militants in 2015, said that a plan for restoration has been developed, although the cost has yet to be calculated.

“How Unesco sees this, I don’t know, their specialists have not met with me,” he said, according to the Ria Novosti report. “But I know that architects from Russia have been here.”