Take a peek into Lacma’s future

The Swiss architect Peter Zumthor has revealed fresh details of his plan to radically transform the Los Angeles County Museum of Art (Lacma). Zumthor spoke with Michael Govan, Lacma’s director, at an event organised by Frieze magazine in London last month. Some renderings he presented were new to both the audience and Govan himself, who quipped: “It was good to see the updates.” The new-look galleries will allow the museum to present its encyclopaedic holdings in an unconventional way, flouting the traditional hierarchy of artefacts and cultures. The museum has raised $275m of the project’s $600m budget to date.

Construction on the snaking, dramatic black structure is scheduled to begin in late 2018. Four buildings on Lacma’s campus will have to be demolished to make way for the 368,000 sq. ft extension. Although low-slung compared with other buildings on the city’s Wilshire Boulevard, Zumthor’s design will be elevated above the street and Hancock Park. The architect explained that “lifting the building enlarges the park” and creates a “typical LA foyer—outdoors”. 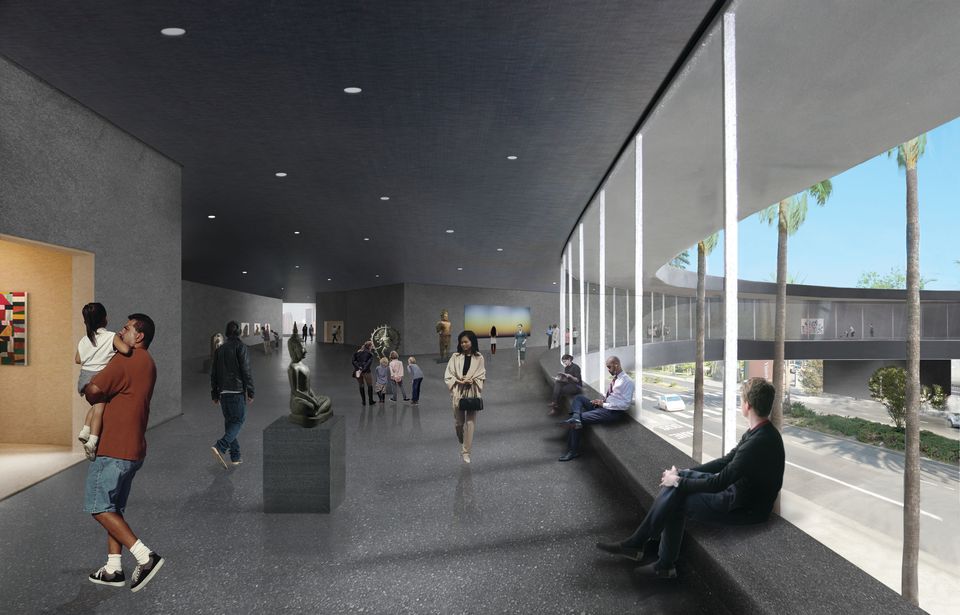 A vast, single-floor “meander gallery” within the new building will offer panoramic views of the city, while eight “chapel galleries” provide intimate encounters with art. These spaces will be surrounded by a cluster of small “cabinet galleries”, designed for object-rich, wunderkammer-style displays.

The experience of moving through the new Lacma building, due to open in 2023, should be “like a walk in the woods, going from clearing to clearing”, Zumthor said, urging minimal signage and labelling. Govan and Zumthor agreed there should be no white walls; the architect prefers a “monastic clay tone”.

The Lacma project is the realisation of Govan’s long-held ambition to work with Zumthor. He originally wanted to hire the Swiss architect to design an extension of Dia:Beacon in Beacon, New York, where he served as the director until 2006.