The city’s residents will be able to use the space for performances or public action, as well as take part in a programme of artist-led events 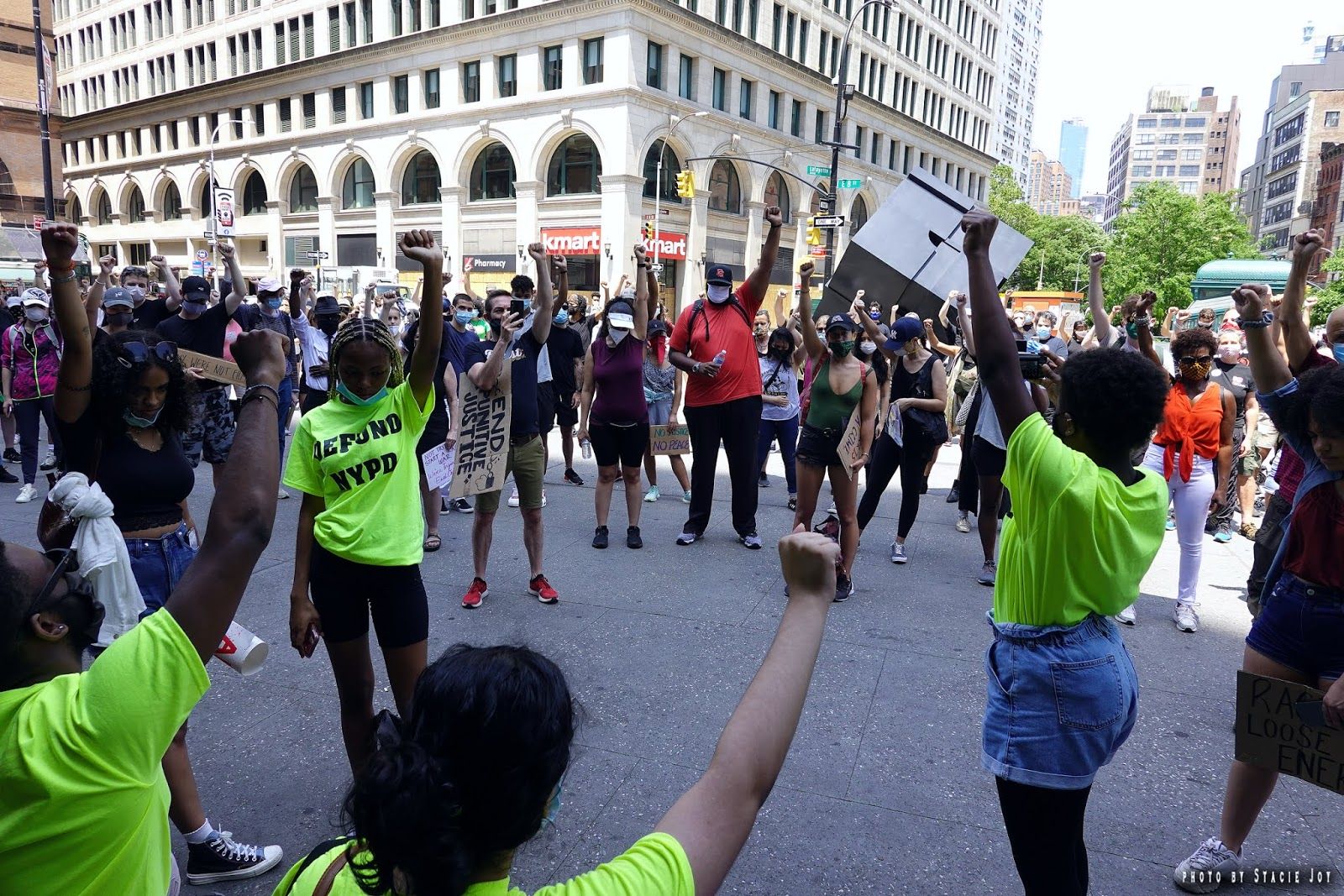 Astor Place is a historic site of public action, including a protest to defund the NYPD last June Photo: Stacie Joy via EV Grieve

For everyone who has felt an overwhelming urge over the past year to shout out or otherwise share what they have been going through, public art producer Creative Time and the artist Rashid Johnson are building a platform in New York just for you. Red Stage, an actual 30ft wide steel structure due to be installed on Astor Place in the East Village, which from 5 June to 4 July will be used for artist performances, musical events and most importantly as a space for the public to use their voice.

“We're only programming half of the time,” says Creative Time’s Associate Curator Diya Vij, adding that several artists—the nightlife collective Papi Juice, the theatre director Charlotte Brathwaite, and the performance artist Morgan Bassichis—will each take over the stage for a day. The rest of the time will be dedicated to “People's Days”, Vij says, “and they are for the public to drop in. We'll sign people up in advance, we'll sign them up on site, but it is that spirit of public participation that we really want to lean into.”

The possibilities are therefore endless. “This is your space,” Vij urges. “What would you do? What could you do?”

As it turns out, while there is a long history of public pulpits or speakers’ corners in many countries, and outdoor performances have become more of a norm due to the pandemic, it is difficult for an ordinary person to have this kind of platform in New York. “There's so much that happens on the back end to make this publicly accessible stage. There are mountains of permitting and invisible bureaucracy that is necessary in order to put something like this up,” Vij says. “This work sits on top of all of that, it creates this public infrastructure and the capacity for people to take a public stage. It's actually not that possible in this city—we still are navigating the restrictions and we have amazing partners at Astor Place Alliance and the Department of Transportation that have made this possible—but without an organisation, it's really difficult to do something like this as an individual. So this really is an offering for the public to freely access a performance space.”

Creative Time will be releasing an online form for people to sign up for stage time in the coming days, and there will also be walk-on slots available. And the organisation is planning a programme of events for the remaining time centred around activist themes, such as Resurgence, Remedy, and Call and Response. “We have a whole month on the stage, so there's a lot of things that we overlap with—Pride, Juneteenth, Flag Day, which I've never celebrated—so we'll be marking those moments throughout the month,” Vij says. Flag Day, for example, will be a chance to “interrupt this moment of nationalism and think about the way that the flag is a symbol for America”, Vij says, through a night of performances that draw on the history of call and response in protest music “as a kind of democracy in action”. A day of “civic joy and civic intervention” will be held in the lead up to the New York City primary elections, during which a new mayor will be chosen. And as the weather warms, and New York’s parks start to fill up again with both citizens and street performers, a “play” date will fill the stage with double dutchers and dancers, drum lines and mimes. “We're really trying to celebrate street theater and all the things that happen in public space anyway,” Vij says.

While the performances and events will be free and open for the full month, depending on the event and the Covid restrictions still in place, “there may be some moments that we do reserved time entry, but maybe just once or twice through the run of the project,” Vij says. “That's just to make sure everyone is safe and we can keep social distancing in place.”

Construction of the stage, painted a bright, urgent red, in line with Johnson’s series of untitled anxiety induced paintings and drawings, is due to start later this month, on the southwest corner of Astor Place plaza. “On its own, it's really quite a striking sculpture,” Vij says of Red Stage. “It's made from these industrial materials and it has these live plants that really add in an element of care and stewardship into the work.” Johnson will also be drawing marks on the entire surface of the stage, which will face Lafayette Street and the famous rotating sculpture Alamo, by Tony Rosenthal. “The Cube is part of the audience,” Vij says. “The whole plaza becomes the atmosphere for this piece. The stage extends it in that way.”

And, as with the expansion of sidewalk dining and the pedestrianisation of some city streets becoming a permanent fixture in New York, there is the aim that Johnson’s Red Stage might highlight the need for a regular platform for residents. “I hope that it seeds ideas for others or even for the city to make this kind of space part of our public life,” Vij says.

• Listen to our in depth A brush with... podcast interview with Rashid Johnson here