Rapper P. Diddy identified as buyer of the Chicago-based painter's Past Times 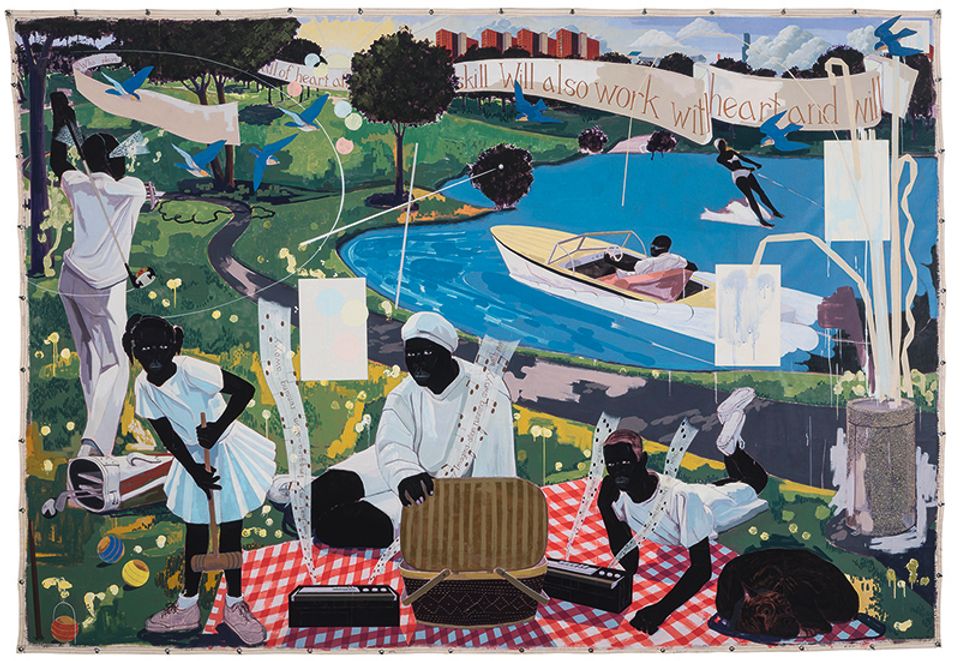 Kerry James Marshall's Past Times (1997) set a new record for a living African American artist of $21.1m with fees Courtesy of Sotheby’s

On 16 May, Sotheby's pulled off a triple stack of sales-within-a-sale that netted $392.3m with fees. Fresh-to-market works from the Morton and Barbara Mandel collection, the Baltimore Museum of Art, and donations by five leading black artists to benefit the Studio Museum in Harlem inspired lively bidding in the room and on the phones, and out of 75 lots total, only two were passed. That those buy-ins were works by yesterday's postwar auction darlings—Yayoi Kusama and Lucio Fontana—hints that a sea change in tastes is afoot.

The mood was a contrast to the lumbering Impressionist and Modern sale on Monday. Hip hop star Swizz Beatz took a seat in the front row. Fifteen records were set, and the rush of bids on certain lots gave auctioneer Oliver Barker’s jaw a workout.

Perhaps most notable was the new record for a living African American artist, Kerry James Marshall, whose 13 ft acrylic and collage on canvas Past Times (1997) was carried aloft to $21.1m with fees, more than four times the artist’s previous auction record of $5m. The work—one of the grandest in the artist’s lauded Garden Project series—formerly hung at the McCormick Place housing development on Chicago’s South Side. Art advisor Joel Straus, who served as curator of McCormick’s public art collection, tells The Art Newspaper, “I called Kerry to see if we could buy one of his epically scaled paintings. There was a waiting list and he needed to intercede in order for us to purchase one”—but did so because McCormick Place was near his home. Straus bought it for $25,000 in 1997 on behalf of the Metropolitan Pier and Exhibition Authority, tonight’s consignor. He relates Marshall’s painting to the Art Institute of Chicago’s famed Seurat, Sunday on La Grande Jatte, and says, “It’s as important as the Seurat but shows black culture that is not typically seen.”

Three bidders seemed to agree: With an estimate of $8m to $12m, Past Times was already expected to set a new record for the artist, but competition drove it to a hammer price of $18.5m, selling on the phone with the Los Angeles-based specialist Jackie Wachter. Before the sale Brett Gorvy, the co-founder of Lévy Gorvy gallery, had posted a photo on Instagram of the rapper P. Diddy "looking carefully" at Marshall's Past Time and Jean-Michel Basquiat's Flesh and Spirit. "Good luck, Mr Diddy" Gorvy wrote, leading to speculation that the rapper may have been bidding. 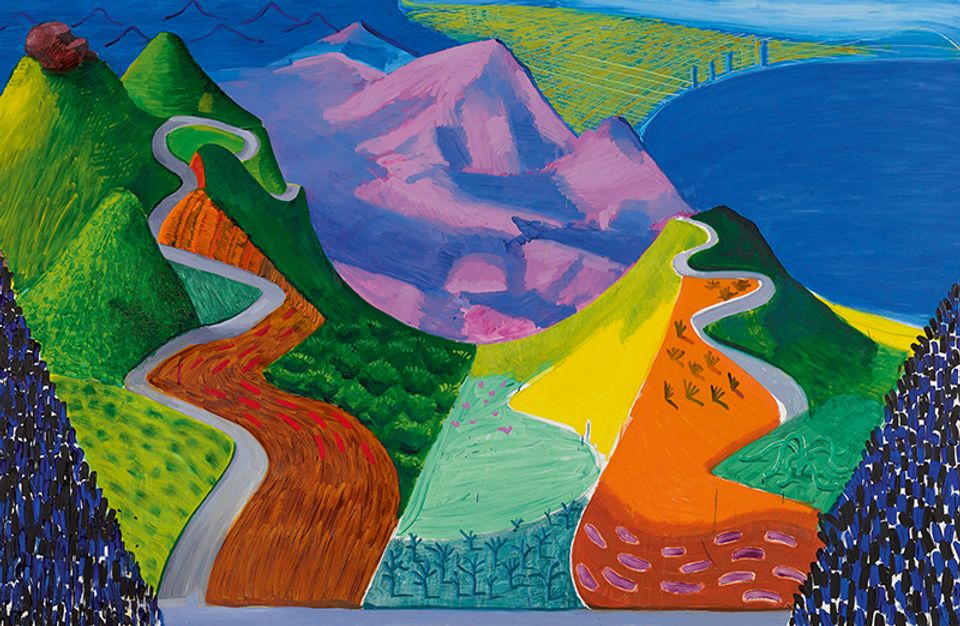 David Hockney's Pacific Coast Highway and Santa Monica (1990) set the second record of the night for the artist with a price of $28.5m Courtesy of Sotheby’s

The Marshall was a crowd favourite, likely thanks in part to the warm reception for his nationally touring retrospective, but it was far from the only highlight. The Mandel collection of 26 lots, offered as the night’s first course, was 100% sold and brought a total of $107.9m. An untitled orange and white painting on paper by Mark Rothko revved up the room, with six bidders in the chase up to $16.5m, or $18.9m with fees, a record for a work on paper by the artist. Sotheby’s head of contemporary art in Asia, Yuki Terase, was victorious. An unflinching duel drove Joan Miró’s large bronze Personnage (1982) to $5.9m with fees, more than double its top-end estimate.

David Hockney’s record was surpassed twice in the space of an hour. First, the six-piece Piscine de Medianoche (Paper Pool 30) (1978) sailed past its $7m high estimate and landed at $11.7m with fees. Not long after, the oil painting Pacific Coast Highway and Santa Monica (1990), recently on view at the Metropolitan Museum of Art, sold for $28.4m with fees to an Asian buyer on the phone with Patti Wong, chair of Sotheby's Asia. Both lots were backed by a house guarantee and an irrevocable bid but managed to generate competition. 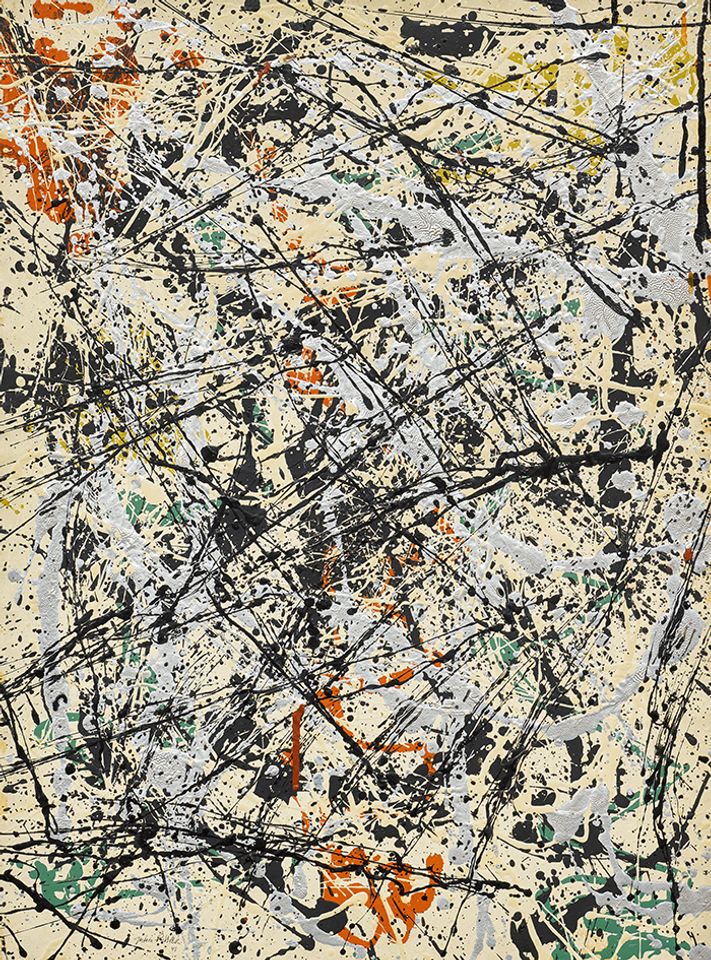 At $34.1m, Jackson Pollock's Number 32, 1949, made the highest price of the night 2018 The Pollock-Krasner Foundation/Artists Rights Society (ARS) New York and courtesy of Sotheby’s

However, the most expensive works, by Jean-Michel Basquiat and Jackson Pollock, barely breached their estimates. Basquiat’s Flesh and Spirit (1982-83), which was the subject a legal tussle just days before the auction, sold on a single bid and just cleared the $30m estimate with fees. A rare Pollock drip painting, Number 32, 1949, came in at $34.1m with fees—the sale’s highest price, but well below the standing record of $58.4m for a drip painting, set in 2013—sold to a bidder on the phone with Sotheby’s chairman of fine art, Amy Cappellazzo. Quizzed about under-performers after the sale, the head of the contemporary department in New York, Grégoire Billault, allowed that the Basquiat suit “clearly didn’t help us” but that the challengingly scaled work was “going to an amazing collector”.

The night’s total was a big improvement of 22.5% on last year’s $319.2m sale, which included a $110.5m Basquiat. “I was surprised by how strong it was”, says advisor Philippe Ségalot. "Not bad", offered Billault in the post-sale press conference, with a tinge of Gallic irony.

UPDATE: On 18 May, the rapper P. Diddy was identified as the buyer of Kerry James Marshall's Past Times. “I know that this work has found a home in a collection with purpose and an eye toward preserving legacy–that of Sean Combs, and that means a lot,” Marshall's dealer, Jack Shainman, told the New York Times.