The 2017 Sharjah Biennial roots for crops, earth, water and cooking

The Sharjah Biennial is the jewel in the crown of non-commercial contemporary art events from the Maghreb to the Gulf. After editions with curators from Japan and the USA, this, the 13th, has Christine Tohmé from Beirut at the helm. She is the widely respected founder of Ashkal Alwan, an art centre that is home from home for artists, a discussion forum, a research and exhibition space.

Tohmé is an activist who says she spends 50% of her time on visa issues, 50% on finding money and another 50% helping her artists enjoy themselves. Never afraid to acknowledge the elephant in the room, at the packed opening she admitted her doubts. “I don’t know who our audience is; is it you lot in front of me? This model isn’t working.”

One of her solutions to this question has been to give the biennial satellites: in Dakar, Istanbul and Ramallah, with the closing event in her hometown this October.

Her title, Tamawuj, means fluctuation, coming and going, but she has also evolved four solid key words in discussion with her partners, the artist Kader Attia and curators Lara Khaldi and Zeynep Öz—water, earth, crops and cooking.

As in past years, most of the event is in the courtyard houses of historic Sharjah, by the creek: Al Mureijah Square, the Calligraphy Square and Arts Square. The Flying Saucer and Planetarium house another eight, while 19 works are in the new Al Hamriyah Studios (see below) about 20 minutes out of Sharjah.

Biennials do not work like museum exhibitions, which stick to a subject and have a beginning, middle and end. This is not only spread over a largish area, but ranges freely, so be prepared to dip in and form your own connections. Here are some pieces that particularly struck me.

Because of President Trump’s unscientific denial of the importance of the ecology, the works that deal with that subject resonated strongly. One that offers some hope is the 2014 video piece in Al Hamriyah Studios by Ursula Biemann and Paulo Tavares about lawsuits brought against unscrupulous companies that wreck the virgin jungles of Ecuador. I learnt that a Native American tribe has recently won its case by invoking the Rights of Nature clause in Ecuador’s 2008 Constitution, which leads the world in recognising nature as having rights that are equal to human rights.

Another related topic is the question of who has the power to give a name to flora and fauna. Is it the people who are indigenous with them, or is it the white man, who takes them over? Using the actual words of a 1940 trial in South Africa, a video in Calligraphy Square by Uriel Orlow re-enacts a case brought against a medicine man for daring to supply his traditional medicines; the white men take for granted that his plants must be superstitious remedies at best.

Palestine is an unhealing wound and it is symbolised in Al Mureijah Square by a fictional Palestinian museum of natural history. Among the exhibits is a blue, undulating floor sculpture that turns out to be a model of the Dead Sea. After the 1995 Oslo Agreement, part of its waters were allocated to the Palestinians and part to the Israelis, but the waters are drying up most rapidly at the Palestinian end and the Israelis are claiming it inch by inch as it turns into dry land.

The turmoil and agony of the rest of the Middle East is present, sometimes overtly, sometimes by allusion. A harrowing sound piece by Lawrence Abu Hamdan is in Calligraphy Square. In 2016, he worked with Amnesty International and recorded former inmates of the Syrian government prison called Saydnaya, where, it is estimated, 13,000 inmates were executed. The particular form of torture practised there was a viciously imposed silence; even a cough from one of the cells led to a severe beating. There are no actors’ screams of agony here, just the voices of the victims telling their story.

Oscar Murillo’s installation in the courtyard of Beit Al Serkal Arts Square has trenches dug in the ground, heaps of rubble and heavy, dark cloths suspended from scales like carcasses and rusted mortuary beds.

Outside, in the square, there is a wall of high, bulletproof riot shields surrounding a little oasis with a palm tree. Is this work by Rain Wu and Eric Chen to be read as a symbol of the UAE’s geopolitical situation or of the world’s beleaguered ecology in general? 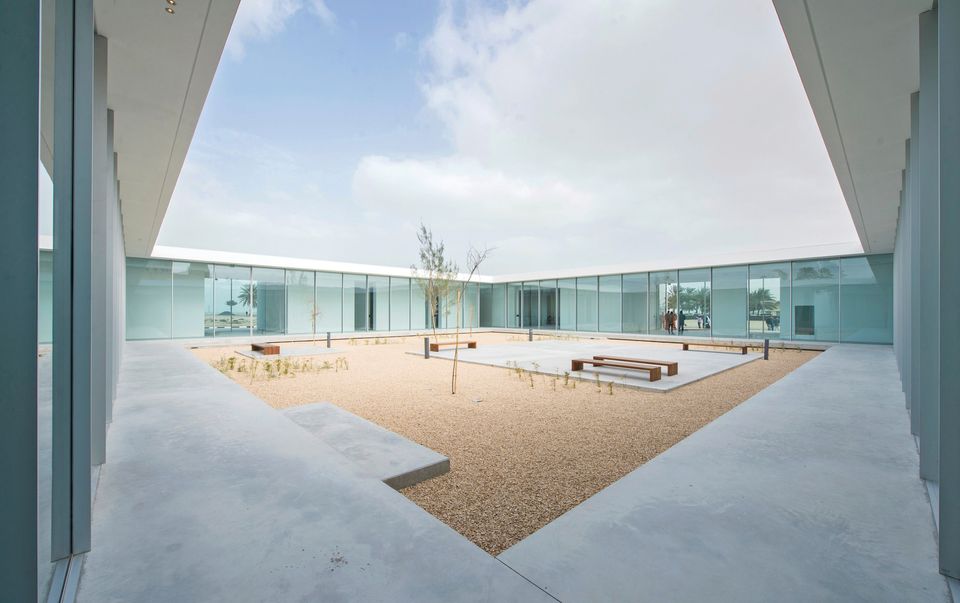 The emirate is reaching out to its neighbours: Sharjah‘s sleek new art space is for the whole eastern region of the UAE

Architecture in the UAE often tends towards Orientalism or starchitectural exaggerations. By contrast, a new, cultural space in Sharjah is harmoniously minimalist.

Al Hamriyah Studios in Sharjah, on the sea, are by the Dubai architect Khaled Al Najjar of dxb.lab. He was inspired by the souq that used to be on the site and has created an inward-looking building, whose 2,500 sq. m consist of well-proportioned rooms interlinked by a cloister-like passage facing a large courtyard. The Studios are hosting part of the Sharjah Biennial at present, but the ruler and his daughter, Sheikha Hoor Al Qasimi, head of the Sharjah Art Foundation, see them as being also for the nearby emirates of Ajman, Umm Al Quwain and Ras Al Khaimah, which have not yet attained a cultural pro le on a par with that of Sharjah, Dubai and Abu Dhabi.

The Studios will host workshops about painting, sculpture, calligraphy, ceramics and photography for the local population, with an emphasis on community life. To help this gel, there is a large communal table for meals and a facility for showing movies. The Studios are the sixth in the Sharjah Art Foundation’s centres across the central and eastern regions of the emirate.

about 9 hours ago
Arts & Crafts Movement gets a dedicated museum in St Petersburg, Florida