The artist who was tied to the sun 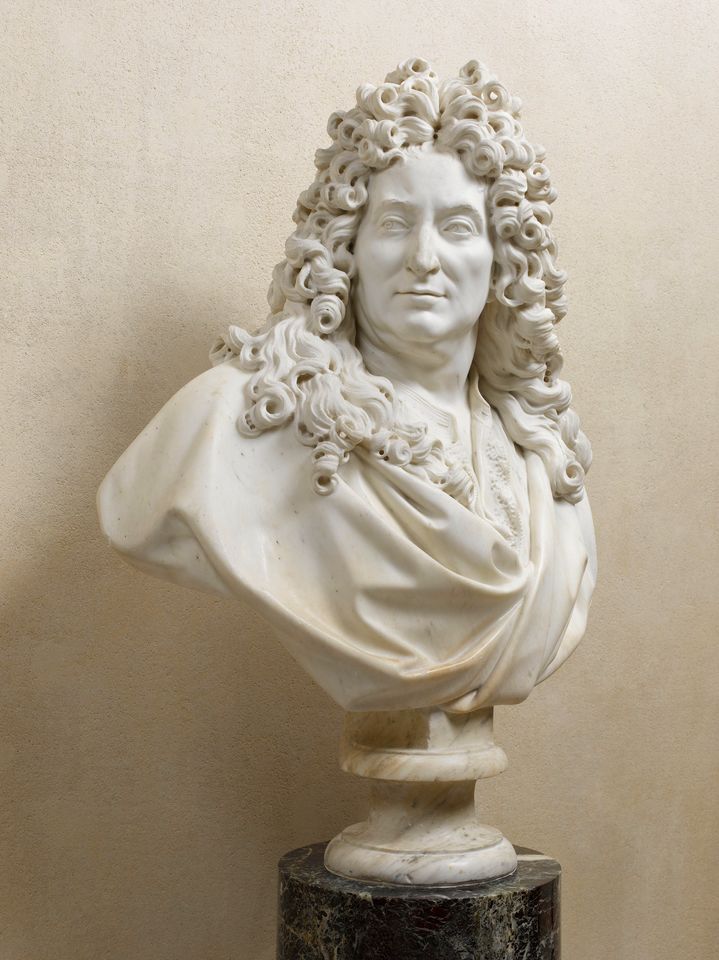 Although many of François Girardon’s acknowledged masterpieces were made for Versailles during his many years in the service of Louis XIV, the sculptor was less fettered by the restraints of the official court style in his religious sculpture and in his portraits of friends, such as this lively portrait bust of the poet Nicolas Boileau, made around 1684, in celebration of which Boileau wrote a poem. Photo: © RMN/Stéphane Maréchalle

Like many leading French artists before the Revolution, the sculptor François Girardon spent most of his career in the service of the French kings. However, as the title of this magnificent and beautifully illustrated new monograph suggests, Girardon’s own fortunes were exceptionally closely tied to those of his monarch, Louis XIV. The two men even died within three hours of each other, on 1 September 1715, both then suffering posthumous declines in their reputation.

While Germain Brice could write in 1698 that Girardon had brought sculpture in France to a degree of perfection equal to the greatest achievements of antiquity, by 1750 the comte de Caylus was damning him with faint praise, implying he had been little more than an able copyist of designs supplied by Louis XIV’s foremost court painter Charles Le Brun. Alexandre Maral’s François Girardon (1628-1715): le Sculpteur de Louis XIV, the first major monograph on the artist since 1928, aims to halt the hare set running by Caylus which, to some extent, still prevails today.

There are two principal barriers to a full appreciation of Girardon’s work. The first is that so many of his sculptures were destroyed or mutilated during the French Revolution. All that survives today of the enormous bronze equestrian statue of Louis XIV formerly on the Place Vendôme, for example, which Maral describes as the most extraordinary equestrian statue ever to have been conceived and executed, are the king’s left foot and two fingers.

The second problem, one shared with almost all French sculpture of this period, is that Girardon had to adopt a uniform style of highly polished muted classicism conforming to contemporary taste, which necessarily eschewed individual stylistic expression. Among all Girardon’s surviving works, it is only in one pair of astonishingly freshly modelled bronze vases, in the Wallace Collection, that we really get a sense of the hands of the sculptor at work.

However, as the curator of the sculpture collections at the château de Versailles, Maral has had more opportunities than most to live in close and sustained proximity to Girardon and his work. He largely succeeds in demonstrating that the achievement of this influential figure in the arts in France in the decades around 1700 was considerably more varied and inventive than has generally been thought.

Born in Troyes, the son of a founder, Girardon began his career working on stucco decorations in palaces. Even at this early date, his work on, for example, the ceiling of the Galerie d’Apollon in the Louvre, shows a freshness that sets it apart from the stiffer contributions of his collaborators on that project, the Marsy brothers and Thomas Regnaudin. Girardon quickly moved on to Versailles, where he was to spend more than a quarter of a century and for which he would create some of his greatest masterpieces—the Apollo served by Nymphs, the sombre statue of Winter, or the magnificent three-figure group of Pluto abducting Proserpine.

While Le Brun was the premier peintre du roi, Girardon was never given an equivalent position of “first sculptor”, but he filled this role nevertheless, directing the work of the many other sculptors at Versailles, providing designs and advising on sculptural decorations. He worked well with Le Brun, whom Maral shows to have been less all-powerful and dictatorial than has sometimes been thought. Girardon was forced into semi-retirement in 1700 thanks to the intrigues of his rival, the architect Jules Hardouin-Mansart, who favoured his own protégé, the sculptor Antoine Coysevox.

Maral has produced a formidably thorough monograph, in which just about every known fact about the sculptor’s life and works is marshalled to produce a most informative analysis of his achievement. The core of the book deals with Girardon’s work at Versailles and elsewhere, including his major contributions to the sculptures for the cupola of the Invalides, but there are also chapters dealing with specific aspects of his sculpture—portraits of Louis XIV and others, religious sculptures and funerary monuments.

Maral is very good at documenting not just the genesis of sculptures, where this is known, but also their critical reception in contemporary guides and writings on art, many of which—for example, Félibien’s description of the Apollo group at Versailles—are extremely interesting.

Girardon evidently felt a little freer in his portrait busts and in his religious sculptures, several of which this pious man sent to his home city of Troyes. Some of his most exquisite figures are to be found in his monuments, such as the figures of Fidelity and Piety from the dismembered Castellan monument, or the two grieving women who accompany cardinal Richelieu on his magnificent monument in the chapel of the Sorbonne.

Although he did not cast bronzes himself, as the son of a founder Girardon would have been familiar with metal casting techniques. He certainly took a direct interest in the casting and finishing of many of the bronzes which can be closely associated with him.  Maral engages less with Girardon’s bronze sculpture, but a discussion of bronzes forms a major part of the supplementary essay by Françoise de la Moureyre, which considers Girardon’s remarkable collection of his own work and of sculptures by other artists.  Two invaluable sources, both well reproduced here, are the series of engravings known as the Galerie de Girardon and an inventory drawn up in 1713. They have enabled de la Moureyre to identify a number of works formerly in Girardon’s collection.

This excellent monograph greatly advances our understanding of Girardon as sculptor and as collector. Essential reading for anyone interested in the arts in France during the Sun King’s reign, it makes a strong case for this most interesting artist.

• Jeremy Warren is an European sculpture specialist. He is the honorary curator of sculpture at the Ashmolean Museum, Oxford, and the author of The Wallace Collection Catalogue of Italian Sculpture (2016)