The Confederate flag of surrender rises in Philadelphia 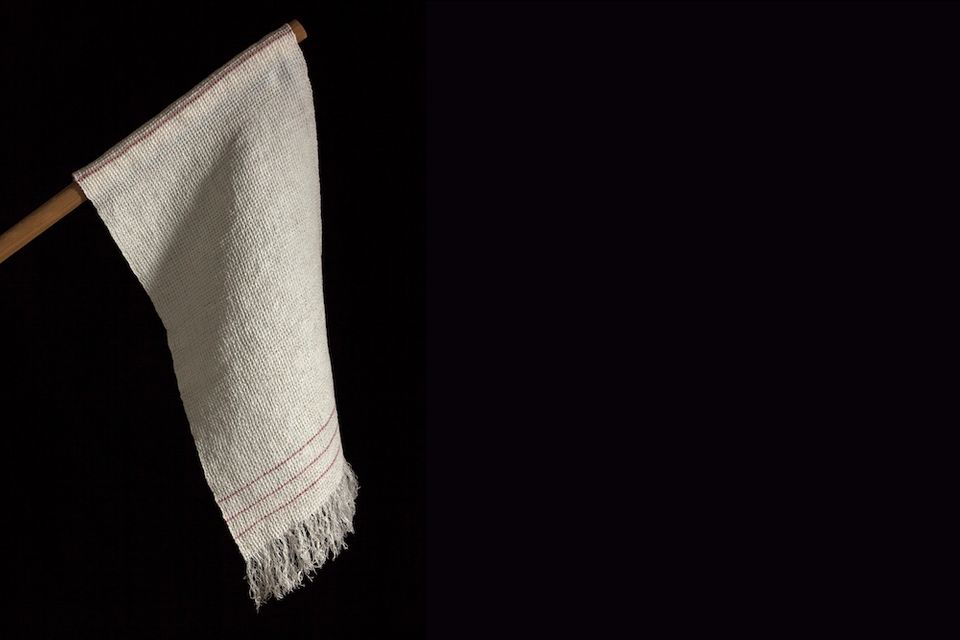 A woven replica of the Confederate Flag of Truce (2019) by Sonya Clark, in collaboration with The Fabric Workshop and Museum, Philadelphia. Carlos Avendaño

Why do we know the Confederate battle flag and not the Confederate truce flag? In Sonya Clark’s exhibition the Monumental Cloth, the Flag We Should Know, on view at Philadelphia’s Fabric Workshop and Museum until 4 August, the African-American artist aims to elevate the truce flag—a repurposed white linen towel with three thin red stripes—that ended the Civil War in 1865 and explore the pervasive symbolism of the Confederacy.

Dressed as Ella Watson, the African-American cleaning woman pictured in Gordon Parks’ 1942 photograph American Gothic, Clark opened the exhibition on Saturday (30 March) with a performance called Reversals where she cleaned a dusty concrete floor with a commercially available dishcloth printed with the Confederate battle flag. As Clark wiped away the dust, she revealed snippets of text from the Declaration of Independence etched on the concrete. And each time the artist moved to another spot with her bucket, she would go down on one knee as a reference to the football player and Black Lives Matter activist Colin Kaepernick. The 20-minute piece was recorded and is now on view in the exhibition.

“Although this Confederate dishcloth is an object that was actually designed to clean, it means something different when I activate it as a black woman, and it raises questions around who gets to have agency over certain objects”, Clark says. She adds: “This idea of ownership—of who gets to capture the flag—is something that kept coming up.” 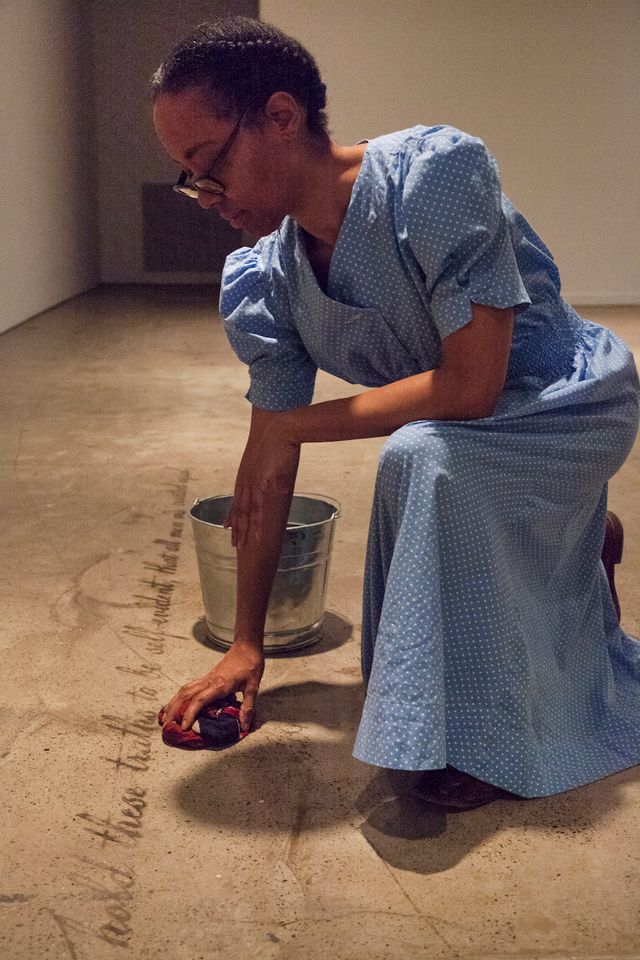 Detail of Reversals (2019) by Sonya Clark, in collaboration with The Fabric Workshop and Museum, Philadelphia. Carlos Avendaño

Another text work in the show, Propaganda, lists the kind of merchandise available today printed with the Confederate battle flag, such as nipple rings, yoga mats, coin purses and coffee mugs. “This is a battle flag from a lost war and it’s everywhere—the list is literally endless”, Clark says, adding: “Imagine replacing this with the SS flag.”

The artist hopes works like these will make visitors reflect on the first time they encountered the Confederate battle flag. “For me, it was on a wooden rollercoaster called the Rebel Yell—and that rollercoaster was actually only renamed around three years ago,” she says. “For other people, maybe it was through Dukes of Hazzard, who were rednecks but were still portrayed as cool and fun and full of hijinks. As children, we were rooting for them.”

The exhibition also includes a space filled with looms, where stand-by instructors will guide visitors on how to weave a truce flag similar to the one waved by the Confederate general Robert Lee to announce the surrender of the Confederate forces. Another gallery has similar truce flags made by volunteers, as well as one wall painted in a locally-sourced hue called “Confederate Red”.

The white truce flag, Clark says, should have the same visibility as bronze and stone monuments memorialising Confederate figures in installed in public spaces throughout the US. “You’re not allowed to wave a truce flag and keep fighting,” Clark says, “and yet today we’re still fighting.”