The end of the world is coming to Manhattan

Robert Cenedella, the “Art Bastard”, brings his vision of the apocalypse to a gallery window just a week before the US election

In a palette of fire, the three-paneled painting Fin del Mundo (End of the World) by Robert Cenedella is a panorama of cataclysm—war, environmental rot and cultural decay—with an orange-haired Donald Trump holding a pitchfork at its center. The Liberty Bell can be seen in the foreground, bearing the names of black men shot by the police in the US. Amid the fires are the Twin Towers, Hitler, and a grotesque headless woman vomiting over Trump’s head—the alternative, Cenedella says, to the Miss Universe standard of female beauty. The painting is due to go on view in the gallery window of Central Park Fine Arts at West 57th Street on 2 November, a week before the US election.

The 5ft by 9ft triptych, loosely inspired by Hieronymus Bosch’s The Garden of Earthly Delights the artist says, is not the first darkly satirical painting Cenedella has made. In the 1980s, he painted war scenes on massive canvases. Sometimes those battles were between armies of corporate brands, as can be seen in Fin del Mundo. He also painted Le Cirque—The First Generation, a seated horde of well-groomed New York glitterati assembled at the restaurant, including Ivana Trump, but not Donald. 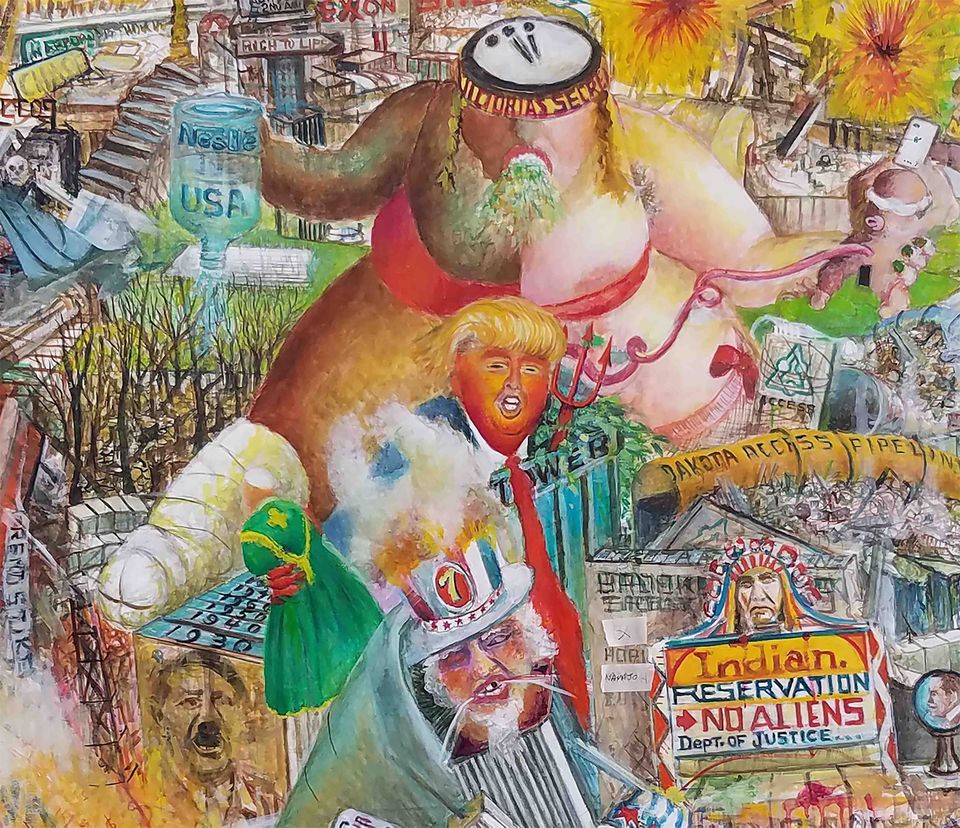 Cenedella’s life and career are the subject of the documentary Art Bastard, which played in New York cinemas in the spring. A pupil of George Grosz—“he was the first adult that I ever respected; he taught me how to draw, but he also taught me how to drink,” the artist says—Cenedella also brings the influence of James Ensor to his paintings of crowds. Now 77, he left the art world in the 1960s for a career in commercial design. “I joined a Madison Avenue advertising agency to avoid all the commercial aspects of the art world,” he says. He made headlines then with The Hostility Dartboard, a wall-mounted target that came with three darts and the face of Richard Nixon, Lyndon Johnson, Sigmund Freud or, for a few dollars more, any other political leader. The dartboards can still be found on e-bay, but retail stores won’t sell them, Cenedella says.

In the late 1980s, when he returned to painting and to teaching at the Art Students League, Cenedella made The Presence of Man, a scene of Santa Claus hanging on a cross, atop a hill of gifts in bright wrapping. The Catholic League denounced him for mocking the spirit of Christmas. “I'm not the one who replaced Christ with Santa Claus,” Cenedella responded at the time.

Another political scene is No Taxation Without Representation (2012), depicting Washington legislators, complete with a clown. The picture was bought by the broadcaster Keith Olbermann for $50,000, with the agreement that Cenedella would paint Olbermann into the scene.

Asked whether he might try to move the picture, which is already owned by a private collector, to the White House if Trump wins the election, Cenedella said he is eager to make that gift. “This could be an official portrait,” he says.