The hunt for Van Gogh’s bed

Vincent van Gogh’s painting of his bedroom gives a deep insight into his personal life in Arles in Provence, where he accomplished his greatest work. The actual bed depicted in the celebrated work survived until after the Second World War, we can reveal. In 1945, a descendant donated the bed to a community near Arnhem that suffered during the liberation of the Netherlands.

Van Gogh bought the bed (and another for a guest) in September 1888, just before Gauguin arrived to stay with him at the Yellow House. Each bed cost 150 francs, a very large sum equivalent to ten months’ rent. The fact it was a double bed suggests that Van Gogh had a lingering hope that he might eventually share it with a woman. Ensconced in the first comfortable home of his own as an adult, he proudly completed a picture of his newly furnished bedroom. “The most beautiful paintings are those one dreams of while smoking a pipe in one’s bed,” he wrote. It was there that he conceived some of his finest works.

Gauguin arrived a month after the beds but his stay was abruptly curtailed by the events of 23 December. It was to his bed that the bleeding Van Gogh returned after his notorious self-mutilation and visit to a local brothel where he delivered part of his ear to a girl. From then on he only spent a few nights at home, being mainly confined to the Arles hospital.

He had thought of taking his bed to the asylum in Saint-Rémy, where he retreated in May 1889 but instead left it in Arles, and in 1890 had it “flat-packed” and sent by rail to Auvers-sur-Oise, north of Paris, where he worked for the last weeks of his life. While in Auvers, he wrote to his brother, saying that, like painted portraits, “pieces of furniture one knows… recall memories for a long time”. On 27 July 1890 he shot himself in the wheat fields above the village, dying two days later.

Vincent’s brother Theo, who inherited his estate, died of syphilis six months later, and the bed then passed to his widow, Jo. She immediately moved back to Holland, where she set up a small guest house. Van Gogh’s bed came, too, since it would prove useful for the lodgers. Jo died in 1925, and the bed then passed to her son, also called Vincent, who was living in the village of Laren, east of Amsterdam.

How I followed the paper trail While working in the archives of the Van Gogh Museum I found an unpublished reference to the bed. In 1937 there were plans to turn the Yellow House into a small museum, and Fernand Benoît, the curator of the Arles museum who championed the idea, wrote to Vincent van Gogh, the artist’s nephew who received Jo’s inheritance, to ask to borrow paintings. Vincent replied positively, adding that “I could give you the bed which appears in the painting of the bedroom”. This letter, written on flimsy paper, which has partly disintegrated, provided the first evidence that the bed had survived. The Yellow House was never turned into a museum. The building was later hit by Allied bombs in 1944 and then demolished.

My next step was to contact the son of Van Gogh’s nephew, Johan van Gogh, then aged 93. I visited him at his home outside The Hague in 2015. He remembered the bed in store in his family’s cellar and recalled what had happened in 1945. That year his father had donated the bed to victims of the war who lived “somewhere in the Arnhem area” in the eastern Netherlands.

Teun Koetsier, a historian in the town of Laren and author of a book on the Second World War, provided me with further information. In September 1945, the citizens of Laren had collected several truckloads of furniture to donate to Boxmeer, a small town 40km south of Arnhem. Photographs of the lorries arriving in Boxmeer survive. 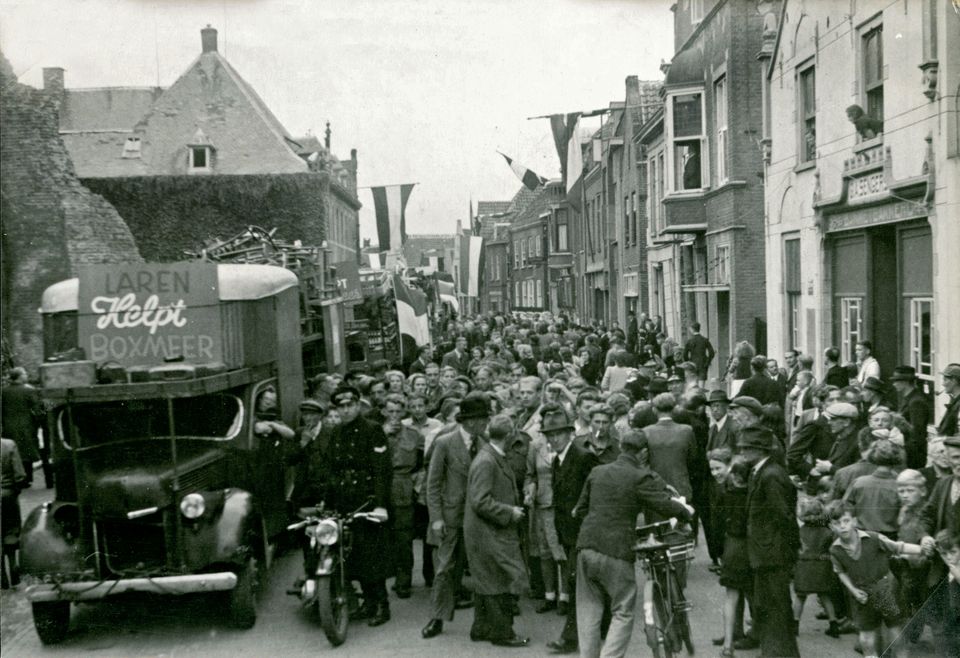 In 1945 Van Gogh’s bed formed part of a donation to a Netherlands community (© Courtesy of NIOD Institute for War, Holocaust and Genocide Studies, Netherlands)

The needy Boxmeer recipient of Van Gogh’s bed would have had no idea of its famous provenance. It would have been nearly 60 years old and its new owner may well have replaced it some years later, when life became easier. But there remains the intriguing possibility that the bed still survives in Boxmeer—a silent witness to the story of Van Gogh in Arles.

• Martin Bailey is the author of Studio of the South: Van Gogh in Provence, published by Frances Lincoln (£25) on 3 November