The importance of being Ettore Sottsass

Diverse work by the larger-than-life designer who rejected Modernist good taste goes on show in Basel, Venice and the Met soon

The Austrian-born, Italian-based designer Ettore Sottsass (1917-2007) was a rebel with a cause. As a counter-force to Modernism, his designs raged against a post-war rationalist approach that largely excluded emotional values by prizing function above form. Instead, Sottsass’s primary focus was social, cultural and sensorial – a design currency that chimes perfectly with contemporary sensibilities.

“Sottsass was a larger-than-life figure with a huge, encompassing vision,” says Marc Benda, founding partner of the New York-based gallery Friedman Benda, which has dedicated its stand at Design Miami/Basel to the designer in honour of the centenary of Sottsass’s birth. “Many are familiar with his name, but the breadth of his work remains largely unexplored, especially by the art world. He was a creator in the true sense, bringing new ideas and sensibility to life; it’s rare to do that over so many decades. His legacy is still undigested because he kept reinventing himself. He responded to what he saw around him and worked with the new materials and technologies introduced during his lifetime. With some historical references only now starting to emerge, this is a seminal moment for a re-evaluation.” 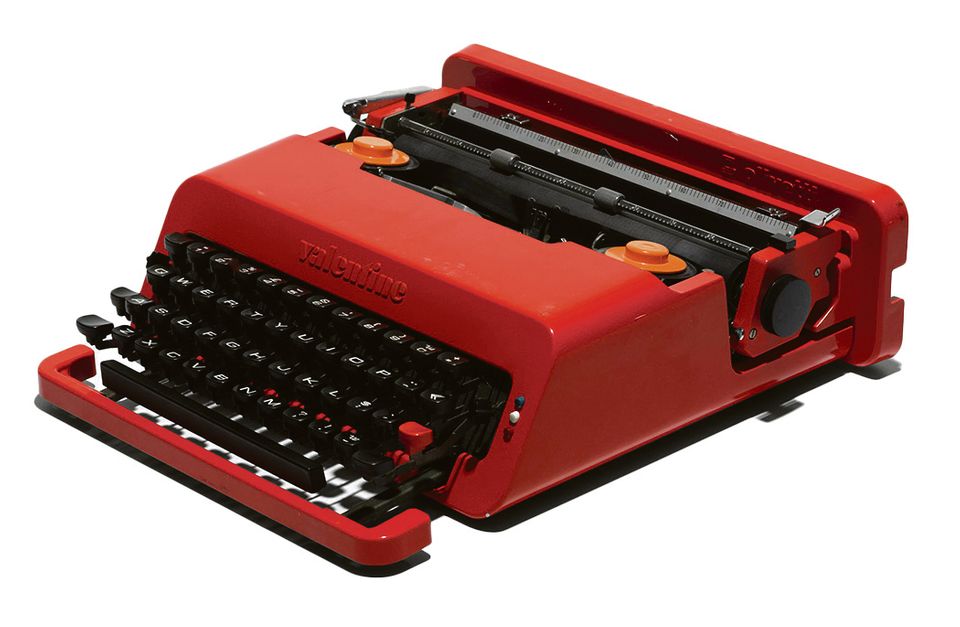 As one of the inspirational figures of Italy’s ricostruzione (the country’s post-war rebuilding), Sottsass penetrated a wide range of arenas with his work, including fashion stores, computers, furniture, industrial design, glass, ceramics, painting and photography. His built architectural works include the Wolf House (1989) in Colorado and Milan’s Malpensa airport (2000), while the products he created for Olivetti, including the Valentine typewriter (1969, co-designed with Perry King), and the kitchenware company Alessi, rewrote the language of industrial design. Many are displayed in the permanent public collections of major institutions, such as the Museum of Modern Art and the Metropolitan Museum of Art in New York, the Centre Pompidou in Paris and London’s Design Museum.

Uniting these diverse projects was a belief that design should be sensual and exciting, conveying universal ideas through form, pattern, colour and structure. “Sottsass… deliberately set out to put a bomb under what he called ‘the uniform panorama of good taste’,” writes Deyan Sudjic, the director of London’s Design Museum, in his book Ettore Sottsass and the Poetry of Things.

“What makes him so interesting to collectors and designers today was his ability to work on cultural, critical and commercial projects at the same time; both sides of his character fed each other,” Sudjic says. “People keep going back to him because he showed the range and possibilities that design can offer. He made objects that reflect our needs but also give us assurance. He was never a mere stylist; he wanted to get to the root of things.” 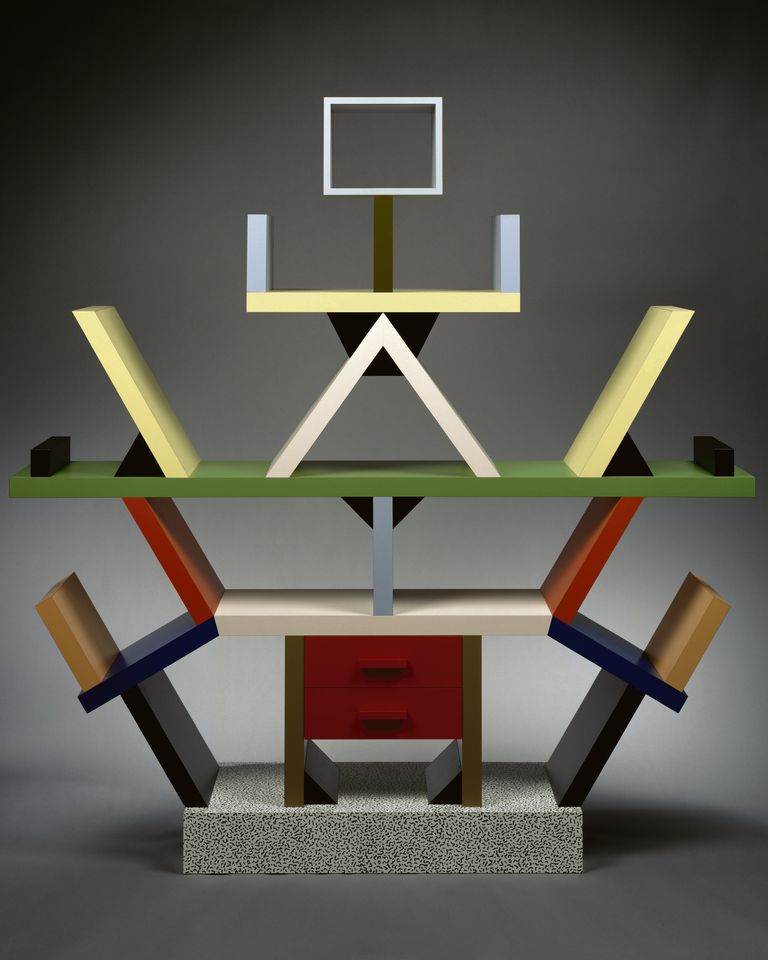 The group’s influence still reverberates, continuing to inspire contemporary designers including the French duo Ronan and Erwan Bouroullec and London-based Camille Walala. In 2013, Sebastian Wrong collaborated with Nathalie du Pasquier on his Wrong for Hay collection for the Danish label Hay, and the design brand Darkroom launched its Memphis-inspired So Sottsass ceramics. In 2015, original designs by Sottsass—six vases, two stools and a lamp—finally went into production when advances in thermoplastic techno-polymer materials enabled the Italian manufacturer Kartell to make their complex shapes. This year’s centenary of the designer’s birth is marked by two important exhibitions: Ettore Sottsass: Design Radical (21 July-8 October) at the Metropolitan Museum of Art’s show at the Met Breuer in New York, and Ettore Sottsass: the Glass (until 30 July) on the Venetian island of San Giorgio Maggiore. The Triennale di Milano has also announced a major survey of the designer’s life and work (14 September-25 February 2018).

“What fascinated me was the contrast between Sottsass’s exuberant designs at the Met and MoMA’s functional collection—how one figure could be interpreted so differently,” says Christian Larsen, the Met’s associate curator of Modern decorative arts and design. “Sottsass is not widely known in the US, so I wanted to contextualise his work by chronologically presenting key pieces in dialogue with work by artists and designers who inspired him, such as Josef Hoffmann, Koloman Moser, Kandinsky and Klee, along with more general inspirations such as ancient Egyptian amulets, Greek and Roman glass and Indian mandalas, while also creating design lineages with contemporary designers influenced by Sottsass.”

Of the 160 objects on display, around half are by Sottsass, including glass, ceramics, enamel and brass work, furniture, product design, textiles, jewellery, collages, architectural drawings and paintings. Most come from the Met’s collection, enhanced by loans from major collectors including Daniel Wolf and Jean Pigozzi. “It will be surprising,” Larsen says. “Sottsass was not just a lone genius, and it’s important to see how the past shaped his own productions. The show will be joyful, playful, colourful and optimistic. If visitors leave with the insight that these are objects made with emotional intent, then they will have learned everything about Sottsass.” 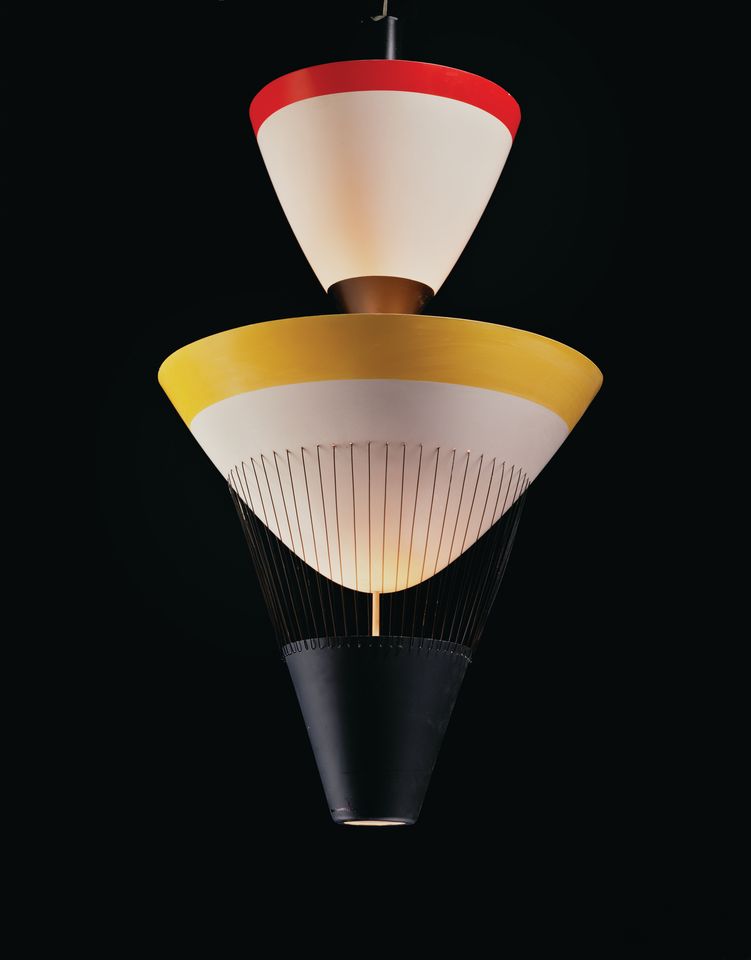 No less emotive is the Venetian glass exhibition, displaying more than 220 designs created by Sottsass between 1947 and 2007. Its location is appropriate, given that Sottsass’s collaborations with Murano glassmakers began after he moved to Milan in 1946 and continued until he died. Organised by Le Stanze del Vetro, an initiative that studies 20th- and 21st-century glassmaking, and accompanied by the first catalogue raisonné of Sottsass’s complete glass production, the show has been organised by Luca Massimo Barbero, the director of the Institute of Art History of Fondazione Giorgio Cini, who says it is “dedicated to revealing a never-before-seen Sottsass”.

The earliest object—a lined, spherical vase—is dated 1947, and the show traces the evolution from an initial series created for Vistosi to more sculptural pieces made with Toso Vetri d’Arte after Sottsass set up the Memphis group. Most pieces are from the collection of Ernest Mourmans, a Dutch architect, gallerist and one-time partner in Ettore Sottsass Associati, and many are being shown for the first time. 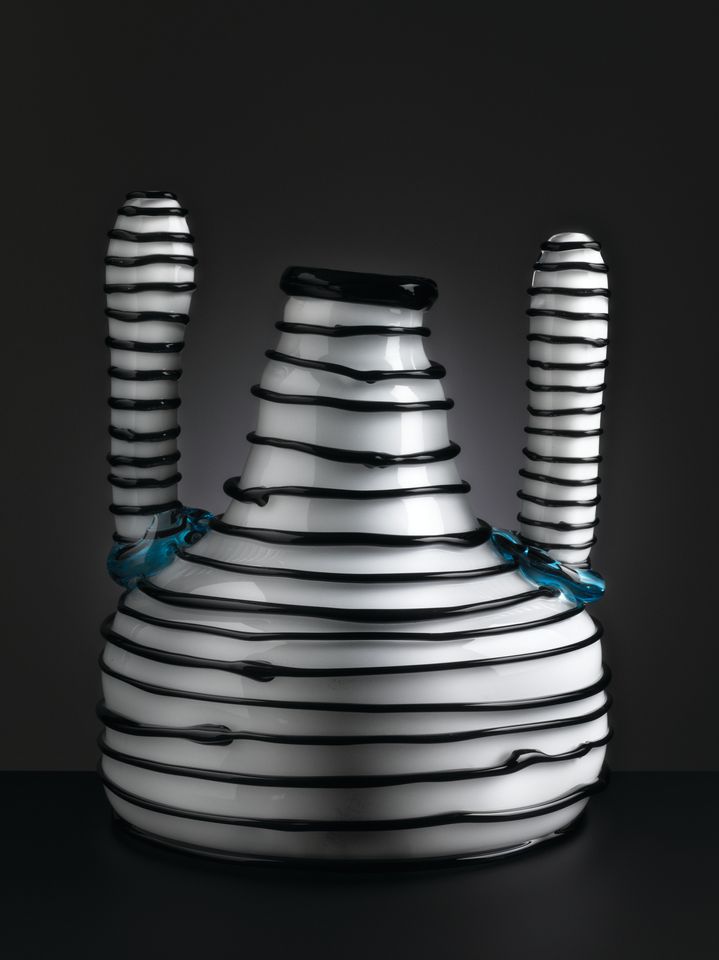 “Sottsass’s glass pieces are complex organisms, designed as if they were characters,” Barbero says. “The artist-architect breaks through the technical boundaries of the objects using materials such as glass, plastic and polycarbonates and brings them to life. They are beings made of many elements that create a lively yet imaginary world.”

It is this collaging effect—“a bringing together of pattern, colour and texture”—that remains so influential, says Rodman Primack, the chief creative officer of Design Miami/Basel. “Sottsass is inspiring a young generation of designers who were not even around in the Memphis-soaked 1980s. I see him influencing work by Cody Hoyt, Katie Stout, Misha Kahn and Jonathan Gonzalez, but more generally in a taste for vibrancy on top of rationalist function. We are a magpie culture, sourcing and combining divergent influences at random, and somehow Sottsass feels like a cleaned-up, sophisticated take on that.” 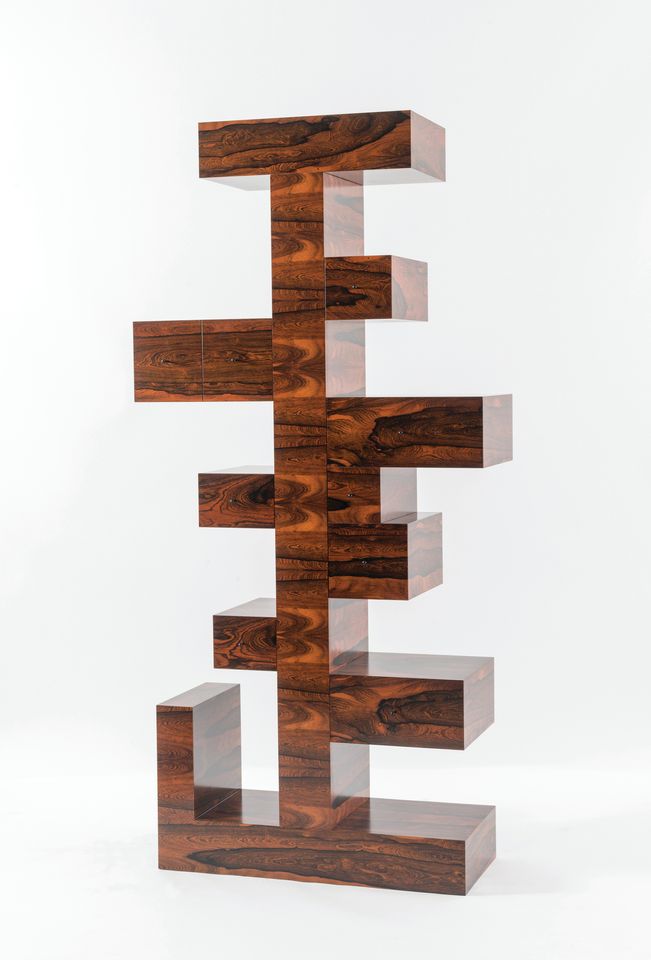 See Sottsass in Basel  Friedman Benda and beyond

The New York-based gallery’s presentation at Design Miami/Basel of around 50 limited-edition, unique and production pieces includes glass, lighting, ceramics and furniture from early and later periods in Sottsass’s lengthy career. Highlights include glass vases from 2006 (each in an edition of nine), with colourful components attached by aluminium wire in a subversion of Modernist conventions. Equally sculptural are blown glass pieces in the Kachina series from 2007. Early designs include a painted aluminium Hanging Lamp, created with Arredoluce in 1957, a mirror on bent, polished, pink crystal plate (around 1960) and Fumo, a unique work in ceramic from 1969. A tall, monolithic cabinet in ebonised beechwood (1964) contrasts with the more complex form of Cabinet no. 91 (2005; edition of six)—both reveal Sottsass’s fascination with the dialogue between architecture and furniture. Early pieces produced by the Italian manufacturer Poltronova include a striped sideboard in rosewood, painted wood and brass, a dining Tavolino in Palisander wood and the Canada Settee two-seater and three-seater sofas and armchair (all from 1959).