List of 34,361 dead refugees and migrants goes back on show in Liverpool after being destroyed

15 August: According to The Guardian, The List has been torn down for the second time. The ripped remains will be left as a “reminder of this systematic violence exercised against people”, says Banu Cennetoglu. The biennial organisers say that the reasons and perpetrators behind the removal remain unclear. 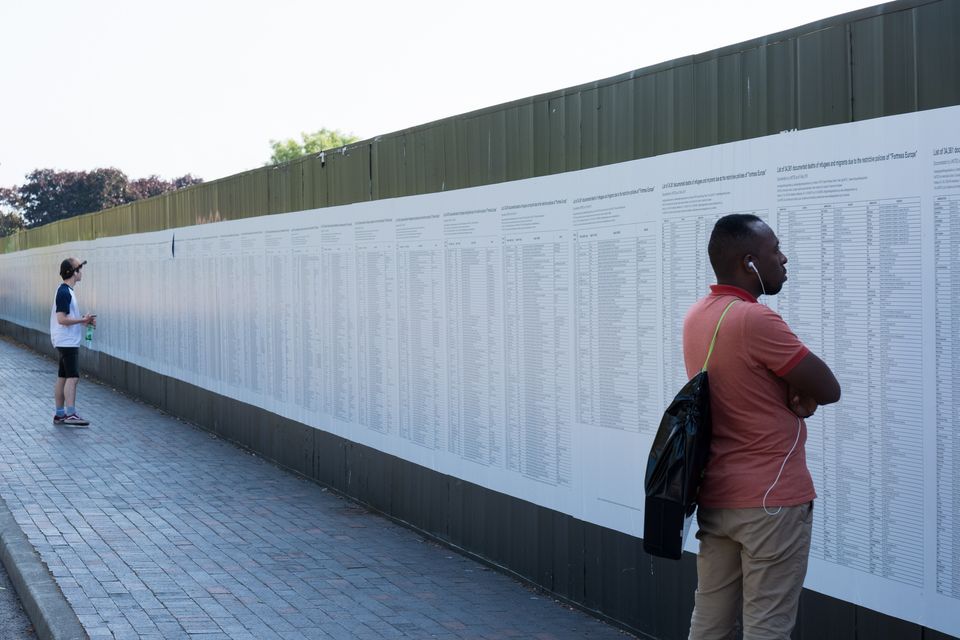 The biennial organisers are presenting The List in collaboration with the Turkish artist Banu Cennetoglu who has translated and widely distributed the list of names of refugees who have died, which is compiled and updated each year by United for Intercultural Action, a network of 550 organisations in 48 countries. Photo: Mark McNulty

The List project has gone back on show in Liverpool after it was torn down last month from hoardings on Great George Street. The piece was reinstalled on Monday (5 August). The work documents the 34,361 names of asylum seekers, refugees and migrants who have died trying to get to Europe since 1993, is a key work in the Liverpool Biennial (until 28 October).

The work remains vulnerable however, a biennial spokeswoman says. “The site continues to be a target but we are doing everything we can to ensure that The List is presented for the remainder of Liverpool Biennial 2018, so that more people have the opportunity to come into contact with it,” she adds.

Biennial organisers are still trying to establish the reasons behind the initial destruction of the project, which details the deaths of more than 34,000 refugees and migrants who have lost their lives within, or on the borders of Europe since 1993. The List is compiled and updated each year by United for Intercultural Action, a network of 550 organisations in 48 countries.

The biennial organisers present the project in collaboration with the Turkish artist Banu Cennetoglu; since 2007, she has translated and widely distributed the details, displaying The List on billboards and in newspapers. In June, the UK newspaper the Guardian distributed copies of the most recent version which was commissioned and produced by the Liverpool Biennial and the Chisenhale Gallery in London.

Sally Tallant, the director of the Liverpool Biennial, says in a statement: “It is timely and important to make The List public during a global refugee crisis. We were dismayed to see it had been removed and would like to know why.”

“People in suits spotted doing it apparently (an eye witness told us last week),” says a tweet from the Double Negative, a contemporary art organisation. A city council spokesman says “we are definitely not responsible”.