Hunk of burning love: the naked selfie of the Elizabethan age

On The Art Newspaper podcast, we zoom into a passionate expression of desire in a miniature at the National Portrait Gallery 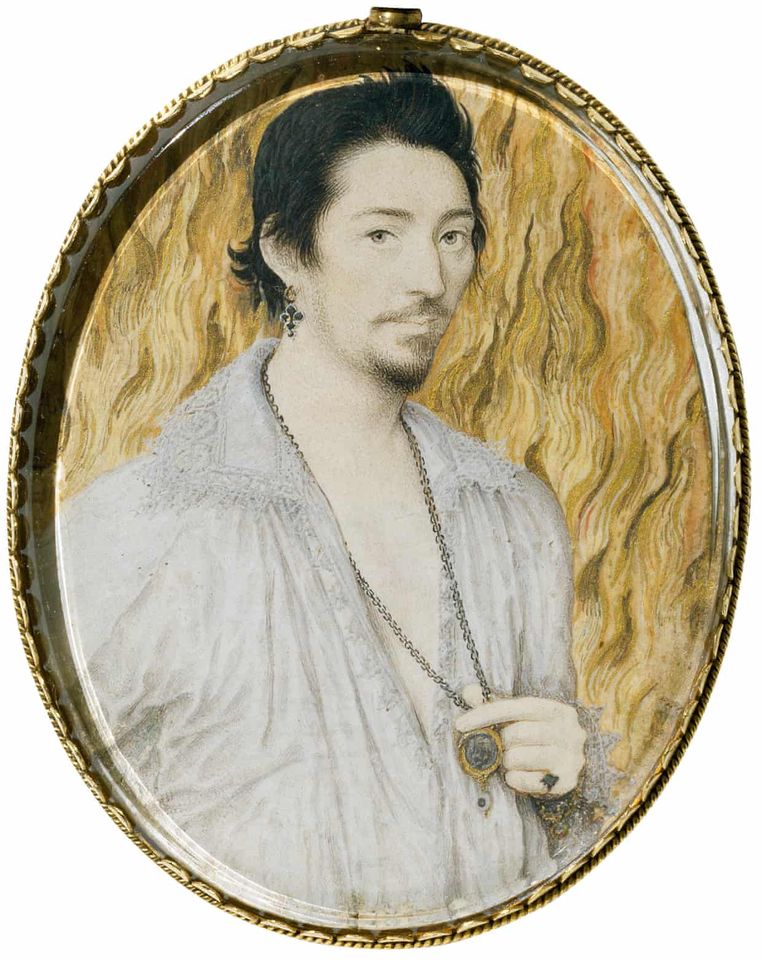 Nicholas Hilliard’s portrait of an unknown man against a background of flames Photo: Clare Johnson/Victoria and Albert Museum, London

Portrait miniatures are renowned for their near miraculous detail, their ability to capture exquisite finery and subtleties of character, yet they could also be used to capture the flames of desire. On The Art Newspaper podcast, we explore the hugely acclaimed show of miniatures at The National Portrait Gallery in London, Elizabethan Treasures—a title that only hints at the scope of the exhibition, which explores both the Elizabethan monarchy, and the era that followed it under James I, the Jacobean court.

“Miniatures were the most highly regarded flat art form in the late-16th and early-17th century in England,” Catharine MacLeod, the show’s curator, tells us on the podcast. “And they were also something that English people were terribly proud of, they knew that they did it better than anyone else, and that was known internationally… They had a very special role to play in court life, and to an extent middle-class life, in Elizabethan and Jacobean England.”

Miniatures, MacLeod says, are “tiny paintings done in watercolour on vellum, basically the technique of manuscript illumination, but instead of being in books, they’re cut out, framed and mounted, either in lockets or in special ivory boxes”. Despite their diminutive scale, the word miniature “derives not from the size, from the prefix min, meaning small”, MacLeod explains, “but from the technique of painting on vellum. Actually, it derives from the Latin word miniare, which means to illuminate in red lead paint, which was the basis of manuscript illumination technique.”

The show is dedicated to the two great exponents of this art in that period, Nicholas Hilliard—who is also the subject of a new biography—and Isaac Oliver. It inevitably features the prominent figures of the age, from Elizabeth I and James I and James’s queen Anne of Denmark, to the future king Charles I and other key figures at the Tudor and Stuart courts, like the dashing Henry Wriothesley, the third Earl of Southampton, the elaborately coiffed patron of Shakespeare—Elizabeth I eventually had the Earl imprisoned, before James I pardoned him.

The sitter for one of the most striking of the portraits is unknown: Hilliard’s vivid 1600 portrait of a man surrounded by fire. “Because miniatures could be very personal objects, could be exchanged, could be concealed, could be held in the hand, they became objects that were used in more intimate contexts than oil paintings,” MacLeod explains. “I think we have to assume that this miniature was a kind of token, probably produced either for a lover or a would-be lover.”

The sitter’s attire is markedly different from the often grand, fine clothing in most of the miniatures. “He’s wearing a linen shirt—which was effectively underwear, it was what you wore under your clothes—open to the waist, revealing his chest,” MacLeod points out. “And around his neck he’s wearing a chain with a jewel on it. The jewel might itself be a locket with a miniature in, we don’t know, but it’s clearly significant because he’s holding it, and that’s the focus.”

The “wall of flames” is a significant departure from Hilliard’s standard plain blue background. “Hilliard has enhanced the flames by putting powdered gold all over them,” MacLeod says, “so that actually even displayed in the case as it is now, if you move, the flames almost seem to be flickering… It’s got a wonderfully illusionistic quality.”

The work’s meaning is not exactly subtle. “The message is that he’s burning with passion and he’s probably saying to his lover: ‘Have mercy on me and my frustrated, burning passion.’ But we can only speculate; it’s certainly a miniature about love.” There is an intriguing detail on the back of the miniature. Playing cards were used as a backing for the portraits. “They were a readily available source of fine, stiff card which the artists used to back the vellum to stop it from becoming floppy when they were painting,” MacLeod explains. “Coincidentally, or possibly deliberately, the playing card on which the miniature is mounted has a heart on the back.”

You can hear the full interview on The Art Newspaper podcast, in association with Bonhams, which you can also find on iTunes, Soundcloud and TuneIn, or wherever you usually listen to podcasts. This episode also includes an interview with Antony Gormley, as he shows his work in two historical locations: at the Uffizi Gallery in Florence and on the Greek island, Delos.