The return of Uncle Joe Stalin and Socialist Realism?

The church and state-sponsored art in Russia have grown closer than ever with a pair of exhibitions at Moscow’s Manezh exhibition hall that seem to be aimed at rehabilitating the country’s Soviet past. Pravoslavnaya Rus, the Russian Orthodox Church’s annual historical archive show, is sharing the space with Romantic Realism: Soviet Painting 1925-45, a display of art officially promoted under Soviet leader Joseph Stalin.

Russian President Vladimir Putin and Patriarch Kirill I together attended the 4 November opening of the Pravoslavnaya Rus show, which carries the subtitle “1914-45, from Great Upheavals to Great Victory”. After the launch, liberal commentators railed against Kirill for implying that Stalin should be appreciated for his achievements rather than just denounced for his crimes, although an official church spokesman said the Patriarch only urged Russians to “see our past objectively”.

Meanwhile, in an interview with Izvestia, the curators of Romantic Realism, Zelfira Tregulova, the general director of the State Tretyakov Gallery, and Eduard Boyakov, a contemporary theater director known for his strong nationalist views, explained the significance of Socialist Realism in religious terms.

“I remember when in 2003 I saw Isaak Brodsky’s canvas The Second Congress of the Comintern, I gasped,” Tregulova said, adding that the painting, which is now on display at the Manezh exhibition, “elevates a momentary event into the ranks of Biblical subject-matter”. 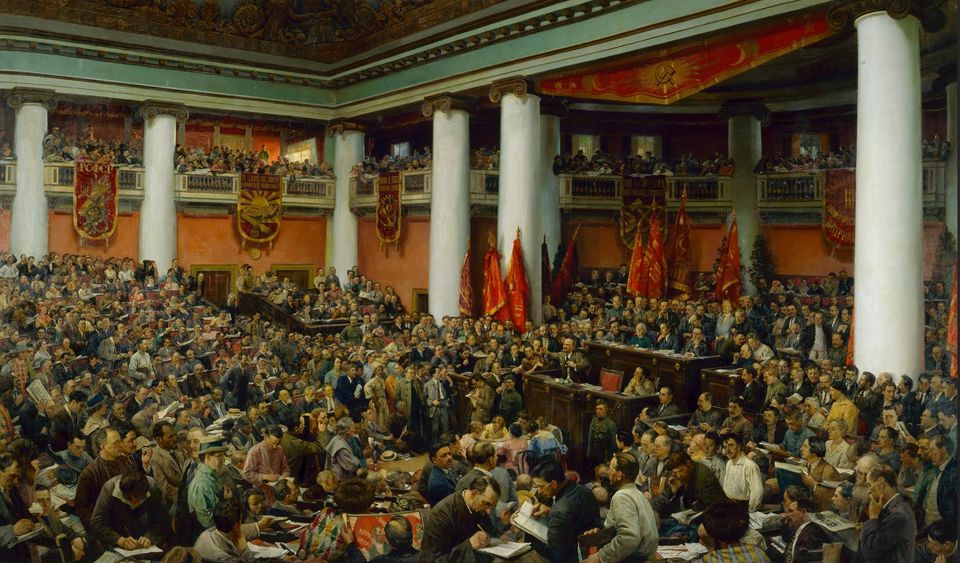 Isaak Brodsky, Inauguration of the Second Congress of the Comintern on the Uritsky Palace (1924). Photo: State History Museum

Tregulova also says that Aleksandr Laktionov, one of the stars of Socialist Realism, used “Biblical content and iconography” in his works and compares them to the “magical realism of Dutch artists of the past.” Laktionov’s art is “worthy of the halls of Versailles”, the museum director said, concluding that all art is, in effect, in the service of the state: “What art was unofficial? Michelangelo, Rafael, Rubens—this is always an expression of clear ideological forms.”

“That’s why commissioned art has always existed and will always exist, as long as there is a state and as long as society does not descend into complete anarchy,” Tregulova said.

• Romantic Realism: Soviet Painting 1925-45 and Pravoslavnaya Rus are both on view until 22 November