The seriousness of a child at play: Kenneth Baker on Joel Shapiro at the Nasher Sculpture Center

Shapiro says he only wants to 'stick stuff in space,' which belies the many important questions his work raises

Anyone who saw early presentations of Joel Shapiro's sculpture in New York will remember a small untitled floor piece from 1973: a foot-long wood mannikin pulled limb from limb, its wire spring ligaments exposed.

The bad boy gesture of this anomalous piece—its dismissal of sculpture's future as a representational art, its equation of construction with destruction—got immediate attention. Critics quickly connected it with Alberto Giacometti's Surrealist bronze Woman with Her Throat Cut (1932), another floor piece whose grisly insinuations punish a viewer's impulse to take it too literally.

Yet right down to his current Nasher Sculpture Center exhibition in Dallas—an ensemble of ostensibly abstract sculpture and drawings deftly fitted into the museum—Shapiro has pursued and elaborated what we might call, with the faintest echo of Surrealism, the haunting of forms by our reflex to representational ways of seeing.

The big new untitled centerpiece of the Nasher show has the entry hall bay of the Center's elegant Renzo Piano building all to itself. In this work, Shapiro deploys all the resources of his art: assertive geometry, palpably improvised composition, the undisguised artifice of exposed internal joints and supports, pointed ambiguities of finish and, most dramatically, color. (A painted maquette of the piece in a separate gallery demonstrates his knack for knowing when a multi-color composition the size of a breadbox will work at the scale of a civic monument, without inflation of sentiment or of aesthetic magnetism.)

Intimations of figural anatomy, of architecture and art historical allusion—particularly to the crisp, utopian dreaminess of Constructivism—pervade the big central work. Shapiro has left various faces of the sculpture's boxy wood components unpainted, evoking the appearance of surface grain by which many of his bronzes acknowledge the carpentered originals behind their casting. This variable treatment leaves a viewer vacillating between seeing the sculpture's parts as slabs of solid color, or as (incompletely) colored slabs.

Despite the exposure of small joints and footings that stabilise the sculpture, its compositional coherence renders unnoticeable the wide, low, white plinth on which it sits. In effect the work incorporates its base, foreshadowing more stagy levitations in the works that follow in the show.

As a maturing artist Shapiro studiedly flouted minimal sculpture's avoidance of pedestals, of easy illusions, hidden armatures, gravity defying structures and human reference. He toyed with mass, scale and shape in ways that activated bodily awareness of perception (as contemporaneous works by Carl Andre and Richard Serra did) while teasing the eye with figural inklings, such as recurrent rhombhedral forms suggestive of a generic house. Such forms, properly positioned or abridged, as a few appear in the Nasher, can also suggest heads: metaphoric, if sometimes inhospitable, dwellings of the mind or self.

A second bay of the Nasher building contains an installation of five new works intended for the space, each painted a single color. 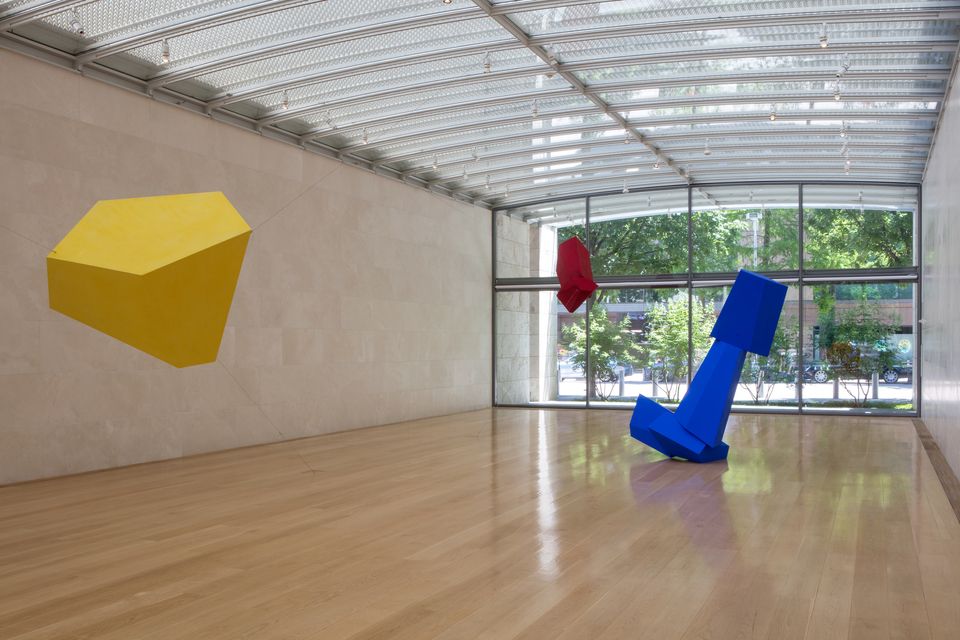 A large, faceted construction in blue, the most figural of the lot, sits on the floor. A viewer may want to say it sits "upright," though its form implies no possible alternative position. Its crumpled L-shape somehow troublingly brings to mind the images of 21st century American war veteran amputees that occasionally interrupt the smooth image traffic of the common culture. (A number of small hanging, stunted figures he made in the past decade also conjure thoughts of the "stress positions" inflicted on designated "enemy combatants.")

Formally, the work rebukes the cubistic mumblings of lesser sculptors such as James Rosati and Bruce Beasley. Its title,  Really Blue (after all) (2016), evokes a memory of Yves Klein's signature hue, and of the imagined bodily aftermath of Klein's famous staged (and manipulated) photograph, Leap into the Void (1960).

Shapiro's twists of form, their felt yet impossible-to-decode fluctuations of scale, volume, implied mass and symbolism, seem to obey an unconscious logic subtending the self-conscious etiquette of reception.

A yellow solid, guyed to the floor and ceiling with thin cables like the other hanging pieces here, recalls the enigmatic polyhedron that furnishes Albrecht Durer's 1514 engraving, Melencolia I, an allusion—if we count it one—that dims emotionally the sculpture's sunny color.

The least characteristic thing here, hanging kite-like near the ceiling, is a not a solid, from most vantage points, but a gray open form that reads like a torn-away corner of fragile architecture, or a pesky fragmentary memory of a Donald Judd box.

Surprisingly, this five element installation reminded me most forcefully of Shapiro's early dismembered lay figure, not by any overt visceral echo, but the way it again raises so many questions: what holds a work of art (or an ensemble) together? What holds its interpretation together? And, ultimately, what holds together the responsive self?

"The only thing I want to do is stick stuff in space," Shapiro says. It is a statement that serves as a finger in the dike to such effusions. And his ink-blot abstractions on paper, a few reminiscent of Henri Matisse or Sam Francis, others closer to Hermann Rorschach, bring us back to the child's play roots of Shapiro's art.

The show left me thinking of Nietzsche's definition of maturity: "to recover the seriousness one had as a child at play."

The Nasher invites a wide-minded reading of Shapiro's new work by grading it into the context of the museum's permanent collection, mingling earlier acquisitions of his work with germane, powerful neighbors such as Anthony Caro's deep green steel Sculpture 3 (1961), a pair of late 1940s figurines by Giacometti and Spider (1940) by Alexander Calder, which levitates forms in a manner worlds away from Shapiro's.

Kenneth Baker retired in 2015 after 30 years as resident art critic for The San Francisco Chronicle. He is an Art Newspaper correspondent based in San Francisco.