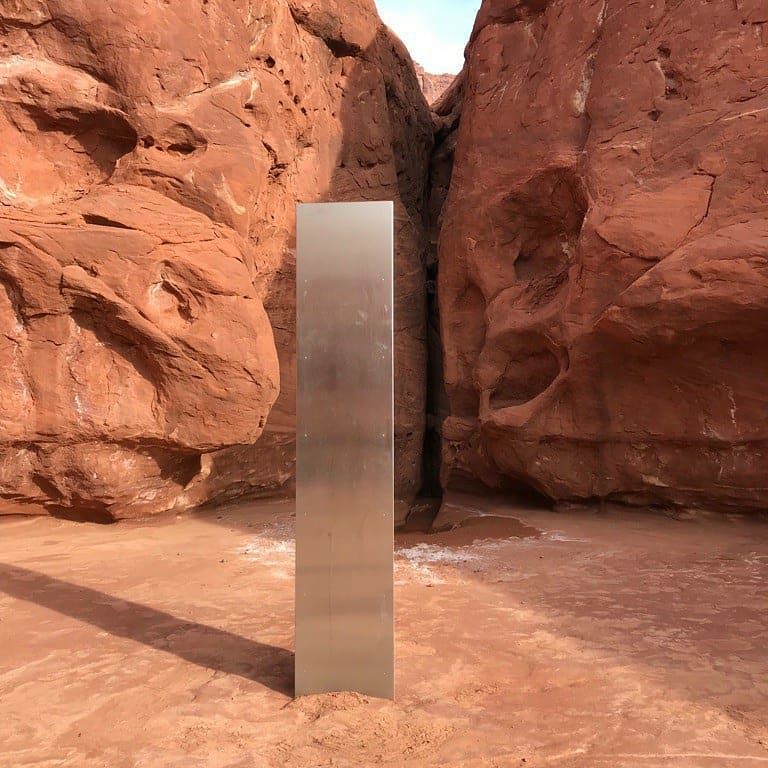 The mysterious monolith recently discovered in the Utah desert—which has been likened to the freestanding plinth sculptures of the late Minimalist artist John McCracken, or the alien-built monoliths in Stanley Kubrick’s 2001: A Space Odyssey—has been stolen, according to the Utah Bureau of Land Management (BLM) and photographs published on social media.

According to a statement by the BLM, the “illegally installed structure, referred to as the ‘monolith’, has been removed from public lands by an unknown party”. The organisation believes that “person or group removed it on the evening of 27 November”, but states that it “does not investigate crimes involving private property” on public land.

The three-panel structure, which is made from steel or metal and is between 10 and 12 ft tall, was discovered on 18 November by a team of biologists of the Utah Division of Wildlife who were conducting a routine count of bighorn sheep in the area via helicopter, as first reported by the local news channel KSL on 21 November.

Last week, a spokesman for David Zwirner, who represents McCracken’s estate, told The Art Newspaper that the monolith is “not a work by McCracken”, but that the gallery suspected it could be a work by “a fellow artist paying homage to McCracken”.

However, Zwirner later told The New York Times that the gallery remained “divided” on the matter, and that he personally believes the piece “is definitely by John”, although there are aesthetic inconsistencies between the object and McCracken’s work, like the use of bolts.

As the plot thickened with art and UFO enthusiasts alike weighing in, Zwirner joked that the “portal” to the monolith could be found in its 20th Street location, via the sculpture Fair (2011) by McCracken that is installed near the lobby of the gallery.

A Reddit group dedicated to discussing and finding the monument was created shortly after its discovery. On 24 November, one user located the structure on Google Earth and shared that the object lived in Canyonlands National Park, one of the most remote national parks in the US, prompting a rush of tourists to travel to the area.

The Art Newspaper has received numerous submissions of drone footage and photographs of the object from people who travelled to the structure before it disappeared. However, the BLM has criticised tourists who damaged the land or did not abide by the “leave no trace” in their quest to find the object.

The origin and current whereabouts of the monolith remains unknown. According to one user on social media who arrived at the monolith on the evening of 27 November, all that was left in the object’s place was the cryptic note: “Bye bitch”.