“This is ultimately a Keep Fit project,” says the British designer Thomas Heatherwick of his new $150m commission for New York, unveiled today in Hudson Yards, the major redevelopment project on Manhattan’s West Side. Made of 154 interlinked staircases and 80 platforms, that add up to nearly 2,500 steps, Heatherwick’s Vessel will serve as the centrepiece of a five-acre public square and gardens built over a city rail yard.

“The idea was that we could make something that you could get up at 6am every morning and you’re walking up the equivalent of 16 storeys,” Heatherwick tells The Art Newspaper. “It’s an achievement to get to the top and get back down.” The designer points to a particularly New York way of life that manages to include fitness in a busy schedule. “I remember coming to New York as a teenager and I’d never seen people in suits with bright white trainers—just powerwalking to work,” he says. 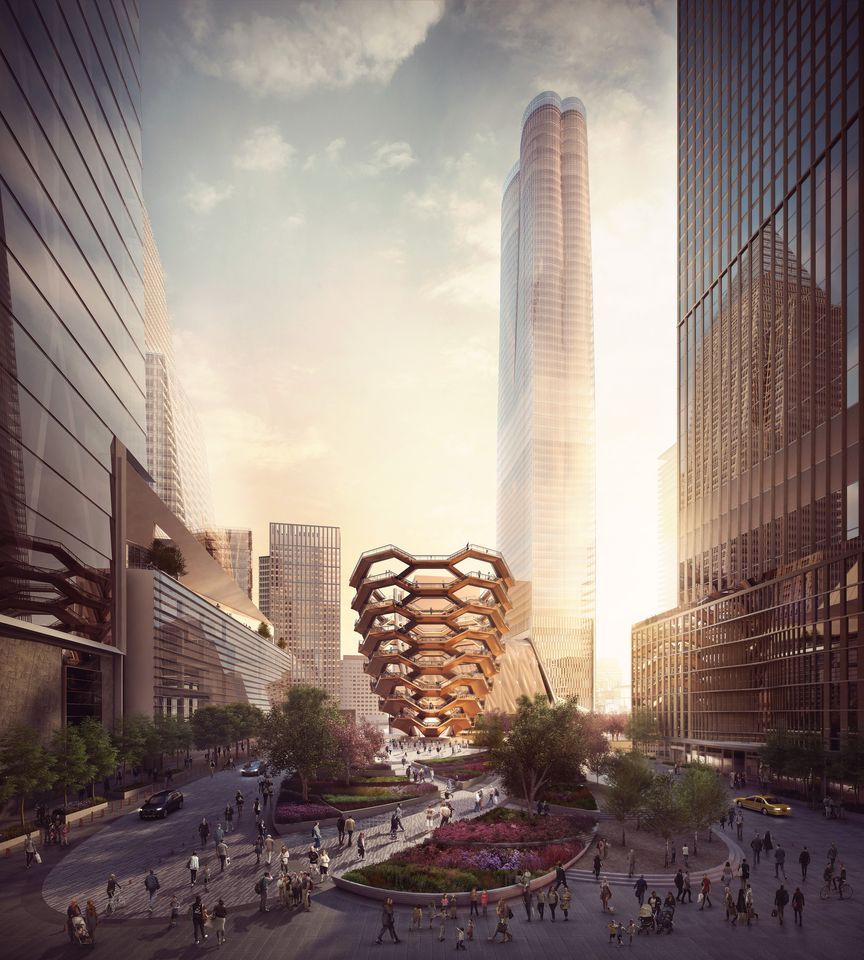 A view of the Public Square and Gardens looking south from 33rd Street (Image: courtesy of Forbes Massie-Heatherwick Studio)

Heatherwick—who has designed a number of high-profile public projects, including London’s Olympic Cauldron and the seed-bearing British Pavilion at the Shanghai Expo—was approached to create a new urban landmark for New York by Stephen Ross, the billionaire developer whose Related Companies is working with the city to revamp the Hudson Yards site. When he saw Heatherwick’s proposal, Ross said at the unveiling hosted by CNN’s Anderson Cooper, “it was love at first sight”.

“Rather than make something that you just look at, and you’re supposed to clap and admire in some way, we were interested in how we could make it have a different social function,” Heatherwick says. “In a space that can hold thousands of people, the notion was not really just making a thing, it was about lifting the people up to see each other.”

The designer is also quick to emphasise that the point was not to create another monumental sculpture. “There’s a 1200-ft high tower, which will have NY’s highest observation deck next to it. It’s really more about this human scale,” Heatherwick says. “There’s often city bashing, people being very negative about what a city is. But looked at from another angle, a city is a very special thing. The way, when a city works well, we protect each other, we protect strangers.” Perhaps that is why in the renderings, the piece resembles a giant openwork hive, with people buzzing around its various levels. 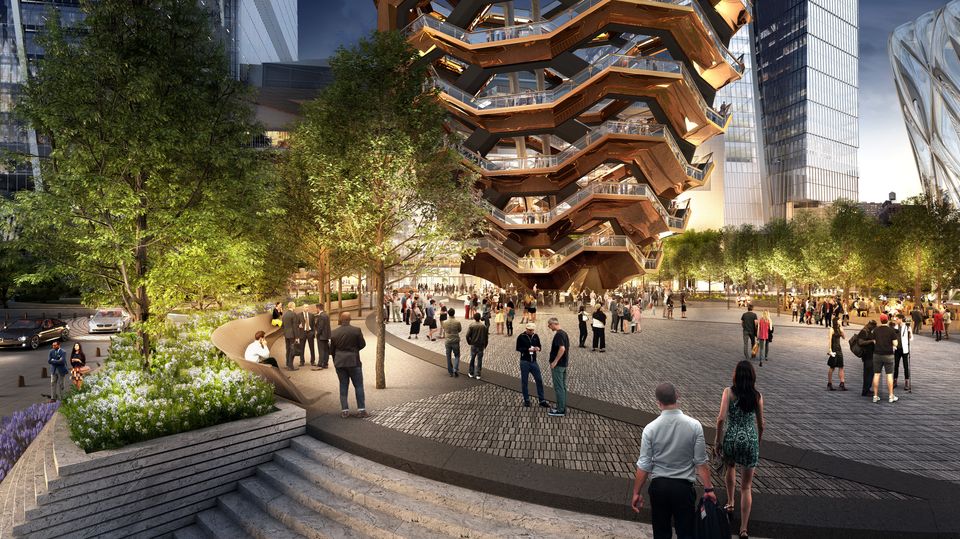 A view of the special events plaza (Image: courtesy of VisualHouse-NelsonByrdWoltz)

This apiary similarity was not a deliberate aesthetic choice, Heatherwick says, but rather a product of the nature of stairs. “The geometry that makes these hexagons comes from the angle of a flight of stairs so that both an 80-year-old and a 3-year-old can walk up them,” he adds. “It sort of designed itself.”

The work is currently being fabricated in Italy, with the first pieces due to arrive in New York in October. The project is schedule to be completed by 2018.

The designer says he also looked for inspiration at old Busby Berkeley films that “had these flights of stairs, and coordinated, choreographed dancers moving across them”. This idea was brought to life at Wednesday’s public unveiling, when a team of Alvin Ailey dancers performed against a small-scale set of stairs on the presentation stage.

Another inspiration was the Indian architectural tradition of stepwells, which feature tiers of stairs in a sort of inverted pyramid, leading down to a pool of water. “They are so beautiful and actually a form of meditation in a sense, the rhythms of those steps and landings,” Heatherwick says. “And we thought, well what if instead of going downwards, we could lift that arc and it be something that’s porous and it frames new perspectives on the buildings around you and the people below.”

An important aspect of the project is the public’s interaction with it, something that Mayor Bill de Blasio hinted at during the unveiling when he called it a “must-see and must-walk space for all New Yorkers”. Heatherwick is also keen that city-dwellers decide for themselves how to use it. “What I love about staircases, they’re half like furniture as well as infrastructure—you can sit on them, dance on them, stand on them. You can have the world’s biggest-ever Slinky competition on this one,” he says. “It’s strong and available and we’re not telling you what you’re supposed to do with it.” Even the name, Vessel, is to be considered an opening suggestion, Heatherwick told the crowd gathered outside the Hudson Yards subway station on Wednesday—“until someone comes along with a funnier, New Yorkier name for it.”