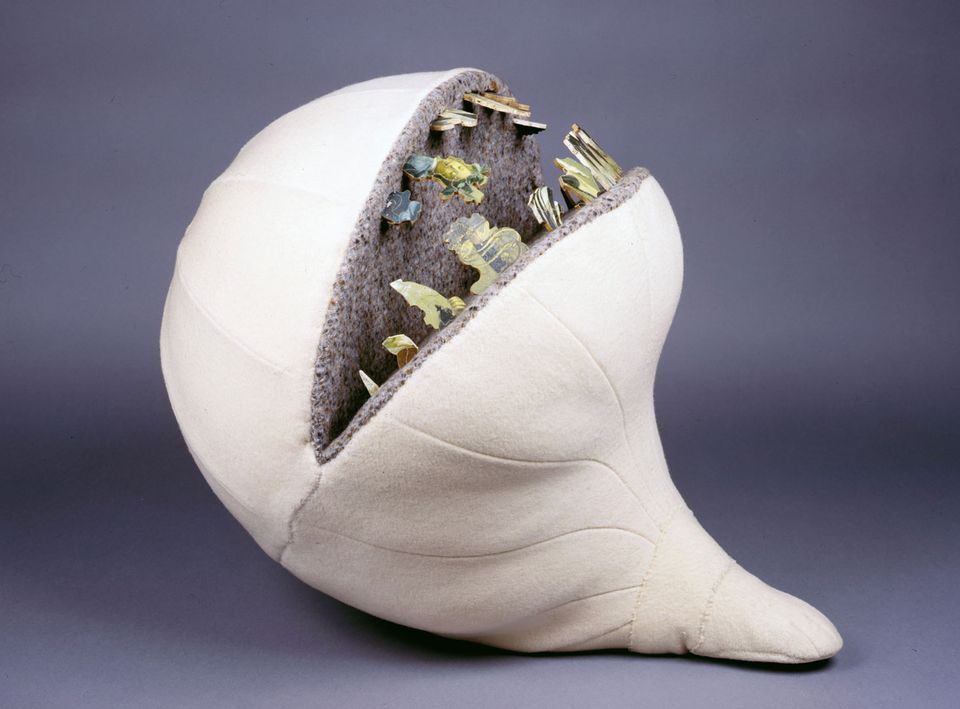 The Dorothea Tanning survey at Tate Modern quickly dispenses with the long shadow of her more famous husband, Max Ernst (until 9 June; tickets £13, concessions available). The first room places Birthday (1942), Tanning’s fantastical self-portrait named by Ernst to mark her birth as a Surrealist painter, across from Max in a Blue Boat (1947), in which only the back of her head is visible, peeking just above the frame. What follows is a powerful argument for Tanning’s surreal world of her own, in which a monstrous menagerie lurks upon the dinner table and dreamy adolescent girls threaten to tear down the walls. Better even than the crisp enigmas of the early paintings are the brushy kaleidoscopic canvases of the 1950s and 1960s and the surprising, often humorous, late fabric sculptures, such as Verbe (1966-70). The nightmarish highlight is the full-scale sculptural environment Room 202, Hôtel du Pavot (1970-73), a remarkable herald of Louise Bourgeois’s Cells almost two decades later.

Feast your eyes on the trompe l’oeil and Hogarthian scenes of Louis-Léopold Boilly at the National Gallery. The small one-room show, Scenes of Parisian Life (until 19 May; free), which opened this week, gives a snapshot of the life of the French artist who worked at the height the French Revolution, witnessed the rise and fall of Napoleon and later the restoration of the monarchy. As well as capturing the turbulence of Paris at the time, Boilly was also caught up in the hysteria and renounced during The Terror for painting works of “revolting obscenity”, such as the now quite quaint Two Young Women Kissing (1790-94). Although he did not invent the technique, Boilly apparently coined the term “trompe l’oeil”, and there are some fine examples in the show. The painting A Girl at a Window (after 1799), mimics a monochrome print and even recreates its blue mount, while A Trompe-l’oeil Crucifix of Ivory and Wood (1812), completes the show of skill by including the artist’s crumpled calling card. Another highlight is Boilly’s late masterpiece, A Carnival Scene (1832), of a Parisian street filled with bawdy characters such as actors from the Commedia dell’Arte, a child blowing a horn, a dog riding a horse and a woman (or perhaps it is a man in a dress?), buttocks bared, seemingly urinating onto the crowd from a carriage.

“To me, drawing is the release of an intrinsic, structural energy, a joy,” says the late Romanian artist Geta Brătescu, as she deftly traces a line with a steady, wrinkled hand in a film included in the show of her work at Hauser & Wirth. The Power of the Line (until 27 April, free) explores works-on-paper made in the final decade of the artist’s life. There is something distinctly uplifting about this show, which places Brătescu’s brightly coloured, geometric forms in clusters. These could be tightly-composed, stand-alone pieces or collaborative works, whose curves and tangential lines playfully dance alongside each other—our subjective interpretation is key here. Brătescu is presented in equal parts as an artist and storyteller, relying on the imaginative capacity of the viewer to engage with her heavily abstracted works in the same manner an author does their reader. The line, as Brătescu envisioned, is manifold. It contains musicality, it is free, but is also purposeful and contained. Above all, it is a pure, distinct mark of expression. If there can be one definable expression that escapes from Bratescu’s hands and resounds across this exhibition, it is that the process of creating art can be a truly joyful thing.