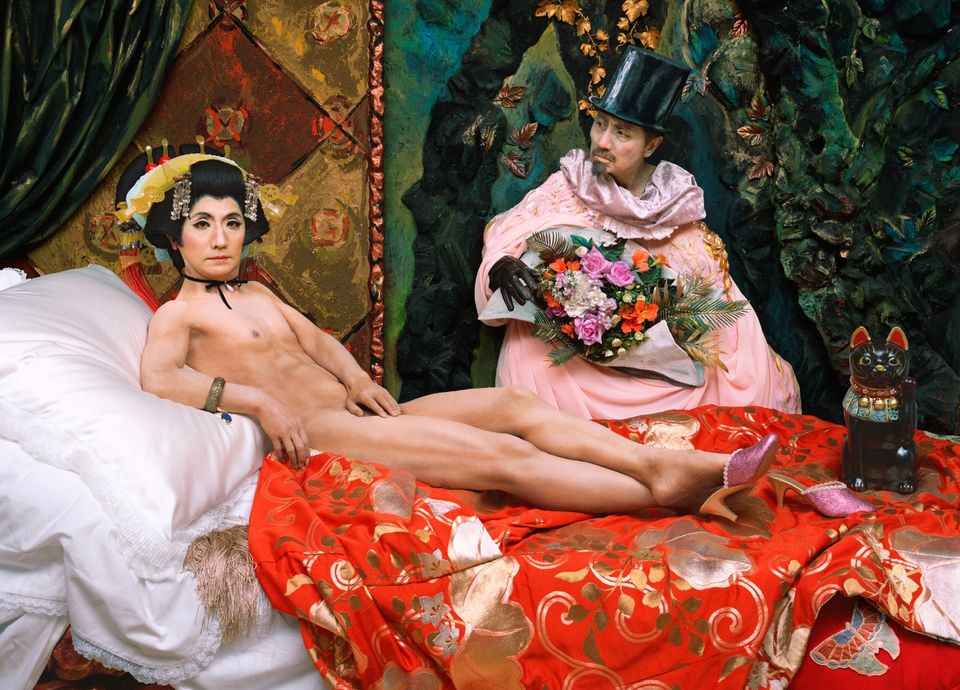 Yasumasa Morimura is not the first artist to insert his presence into images of familiar masterworks, but he has a distinct agenda: he asks the viewer to not only to reflect on the “self” as an artificial construct, but to reflect on the relationship between Japan, Asia and the West. In his new solo show at Japan Society, Yasumasa Morimura: Ego Obscura, opening Friday (12 October-13 January 2019), visitors are immediately confronted by an array of chromogenic prints resembling paintings by major Western artists including Dürer, van Gogh, Vermeer and Velázquez. The artist has ingeniously created sets in which he reconstructs the pose, costume and other elements but inserts his body or face in place of the original subject. In other galleries, Morimura upends Manet’s Olympia and transposes an image of General Douglas MacArthur and Emperor Hirohito into his parents’ tea shop and home. On Saturday night (13 October), the artist will give a special multimedia performance in Japan Society’s auditorium, morphing into famous figures from the modern era.

Leonor Fini: Theater of Desire 1930-90 (until 4 March 2019) at the Museum of Sex is not only a well-deserved art historical resurrection of this fantastical and mostly self-taught Argentine-Italian artist. It is also a joyful exploration of freedom, creativity and gender non-conformity in the life and work of Fini, a celebrity in her day who has fallen off the radar of US audiences. Fini showed with the Surrealists in the 1930s and 40s but did not identify as a member of the group. This exhibition shows the range of her practice—from book illustrations to a perfume bottle design for Elsa Schiaparelli—but her paintings, which have a fineness inspired by Flemish works, steal the show. Fini depicts herself in her own works as a subject with desire, rather than an object of another person’s desire, like in Woman Seated on a Naked Man (Femme assise sur un homme nu; 1942), which shows her perched on a languid sleeping male nude.

Wander through the sublime in Levy Gorvy’s exquisite exhibition Intimate Infinite: Imagine a Journey (until 24 October), which was inspired by the lines “To see a World in a Grain of Sand / And a Heaven in a Wild Flower / Hold Infinity in the palm of your hand / And Eternity in an hour” from William Blake’s poem Auguries of Innocence. The three-floor loan show displays around 100 works by a dizzying who’s-who roster of 27 Modern and contemporary artists, including Cy Twombly, Agnes Martin, Jasper Johns, Alberto Burri and Mona Hatoum. The exhibition’s third and top floor, which looks at “fantastical universes”, is particularly enchanting, greeting visitors with Jean Dubuffet’s magical butterfly collages. The works on the walls range from Hans Bellmer’s disturbing photographs of dismembered dolls, to René Magritte’s La condition humaine (1935), to Vija Celmins’s soothing, hushed works like Long Ocean #3 (1973). But the most enthralling display are small, magical boxes by Joseph Cornell and Lucas Samras, arranged on a platform that winds through the space.