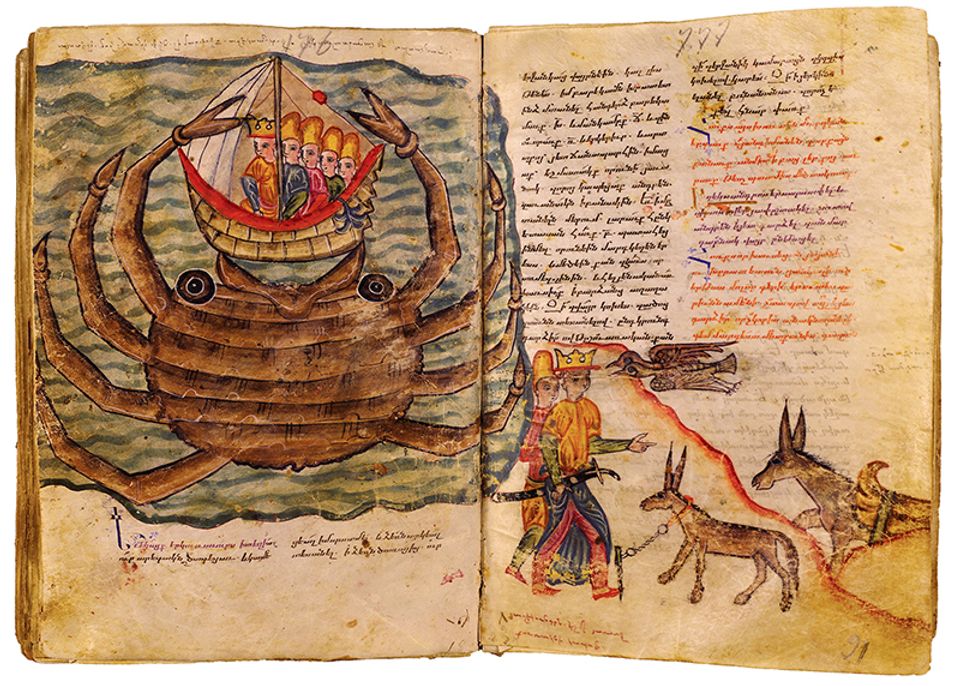 A 16th-century manuscript of Alexander's Romance, Illuminated by Zak'aria of Gnunik' and Hakob of Julfa; scribe: Zak'ariay of Gnunik', in the collection of the Mesrop Mashtots Institute of Ancient Manuscripts Photo: Hrair Hawk Khatcherian and Lilit Khachatryan

This is your last weekend to catch Armenia!, an ambitious show at the Metropolitan Museum of Art that aims to rectify how that country on the far eastern border of the Western world has long been overlooked in the history of Christian art. Displays of illuminated manuscripts, carvings, reliquaries and textiles, almost all of which are on view in the US for the first time, testify to that culture’s dogged resilience. The timeline stretches from AD301, when Armenia became the first nation to convert to Christianity, to the 17th century, and in a way, it is a harrowing tale: swaths of medieval Armenia were successively overrun by Muslim, Persian, Mongol, Mamluk and other conquerors. Yet those conquests also led to a rich cross-pollination: note how how birds, crescents and seated cross-legged figures commonly found in Islamic art dangle from a pair of 11th-century gold earrings, or how a Chinese dragon adorns the robe of an Armenian archbishop in a 13th-century manuscript.

To say that public confidence in the US government right now may be low is an understatement. This sense of distrust, if not downright conspiracy, is exactly what Eric White takes up in his solo exhibition, Triage, at Grimm gallery (until 13 January). His latest series of surreal yet hyper-realistically rendered paintings present a psychologically complex narrative of a woman living in the Vietnam War/Watergate era. Disillusioned with her reality, she turns inward to find truth in her own pagan awakening. In these images, rune stones, tarot cards, symbolic shapes and occult books punctuate vignettes of Brutalist building parking lots populated by nothing but classic American muscle cars. All of these things have cult followings and indeed connote power, whether federal, physical or spiritual. White leaves it up to the viewer to decide in which to place one’s faith right now.

Executive (Dis)Order: Art, Displacement and the Ban (until 19 January) at the Queens Museum shows pieces by 11 contemporary artists who have been affected by Executive Order 13780 (the travel ban), or who make work on related issues. “I wanted to make sure each work not only moves the audience in a metaphorical sense, but also at physical level with works asking for closer inspection, manoeuvering, stepping back, or even touching,” says Osman Yerebakan, who organised the show with the non-profit Artistic Freedom Initiative. Experience the feeling of collective memory in the Libyan artist Reem Gibriel’s installation In Sense of Remembrance, cubby-like spaces where visitors can rest their heads on scented pillows and listen to a recording of Gibriel reading a poem. The Yemeni artist Asiya Al-Sharabi’s project Contemporary Archive, painted-on prints of old photographs of anonymous American sitters, evokes the wistfulness of old family photos in a secondhand shop. “In these challenging times of turmoil and cruelty, the works emphasise the human aspect lying beneath bureaucracy,” Yerebakan says.