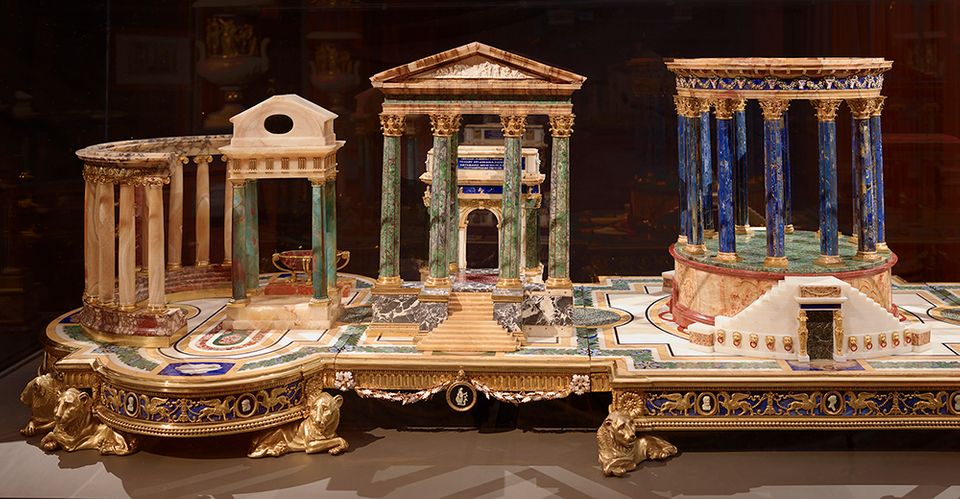 You will not find tableware like this at even your poshest holiday feasts. Prepare to be dazzled at the Frick Collection’s exhibition Luigi Valadier: Splendour in 18th-century Rome (until 20 January 2019), the first monographic exhibition on this master of decorative arts. The clientele of the designer, gold- and silversmith, draughtsman and bronze founder, included popes, royalty and aristocracy across Europe. Whimsy is rarely found in the heavy sumptuousness of an object in marble, gilt bronze, enamel, lapis lazuli and other precious materials, but the exhibition’s pièce de résistance—a deser made for Jacques-Laure Le Tonnelier, Bailli de Breteuil—pulls this off. This banquet centrepiece (around 1778) has various architectural elements that can be moved around. Valadier’s incorporating of antique elements like cameos in many objects is particularly interesting. Other objects include furniture, oil lamps, serving ware, preparatory designs and statues, like those of saints he made for the altarpiece of Santa Maria la Nuova in Monreale, a treat to see up close. For the art historically-inclined, the show also provides an interesting look at the shift during the 18th century to the Neoclassical.

With the New York art world gripped by Warholmania, what better time to compare and contrast? James Rosenquist: His American Life at Acquavella Galleries (until 7 December) offers a luscious portrait of a Pop artist and an intriguing counterpoint to the current Andy Warhol blockbuster at the Whitney Museum of American Art. Like Warhol, Roy Lichtenstein and other Pop contemporaries, Rosenquist harnessed and subverted the imagery of mass media and popular culture, drenching the viewer in a brightly hued, lucid contemporary reality. But his aesthetic was fragmented: the giant shiny grille of a 1960s automobile might be juxtaposed with a wide-scale image of canned peaches or spaghetti or an expanse of shimmering pink fabric. Part of that vision was rooted in his background as a billboard artist in New York City: while working on a scaffold, Rosenquist could only see huge, virtually abstract details of the vast realistic image he was painting. Dating from the early 1960s through the early 1980s, each of the 17 paintings at Acquavella rewards looking: the effect is both discordant and entrancing, planting the viewer in a banal yet mysterious American landscape.

Warm your heart in this chilly weather at the Museum of the City of New York, where the delightful exhibition A City for Corduroy: Don Freeman’s New York (until 23 June 2019) celebrates the 50th anniversary of Freeman’s story of the beloved bear, and presents other New York moments in the artist’s work. Learn about the layered process Freeman used for the illustrations in Corduroy (1968) and A Pocket for Corduroy (1978), or his interest in the theatre—for instance, he made the poster and Playbill art for the original Broadway production of A Streetcar Named Desire in 1947, and backstage drawings, like a charcoal work of Carol Channing applying her lipstick for Gentleman Prefer Blondes. Freeman’s images of everyday New Yorkers—a little girl playing on a fire escape, subway riders—are engaging and sympathetic. “He captured the energy and chaos of the city as well as its still, isolated moments,” says the museum’s director and president, Whitney Donhauser. The clever exhibition design by Marissa Martonyi (demonstrated by her toddler’s enthusiasm at the opening) includes a reading area that resembling a stage.