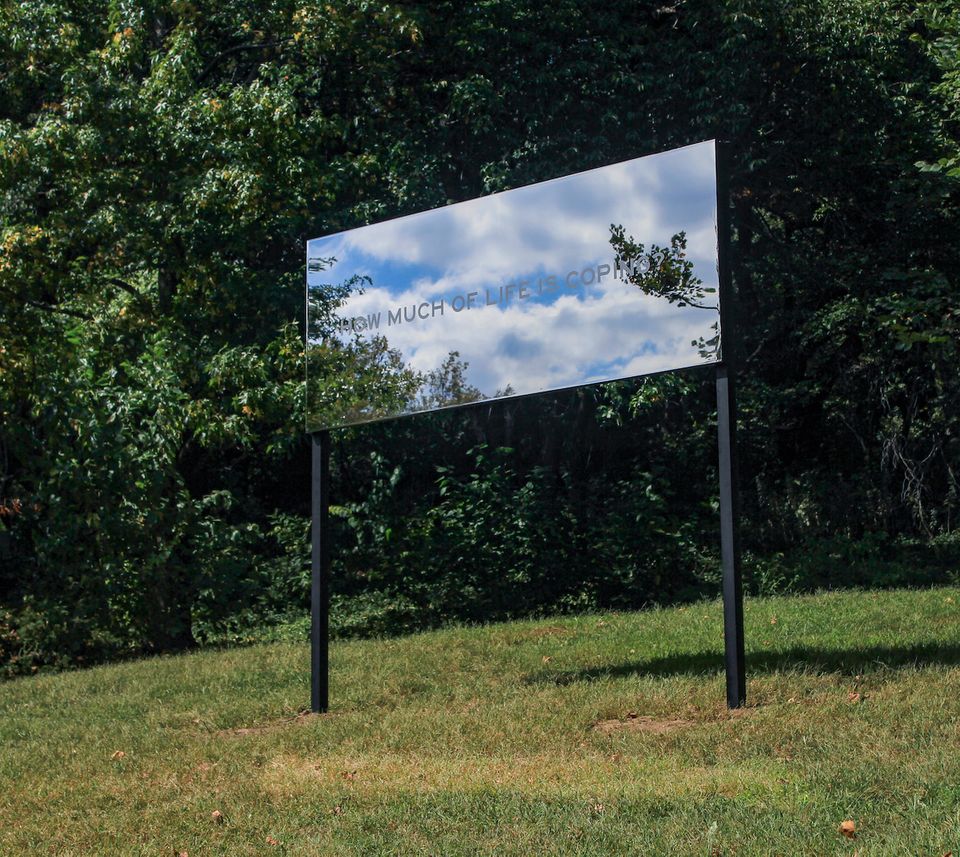 Chloë Bass: Wayfinding at St. Nicholas Park—an exhibition organised by the Studio Museum in Harlem (until 27 September 2020)—invites visitors to find a moment of private reflection in a public space, and conceptually addresses concerns about rapid gentrification in New York. The artist has devised three large mirrored billboards that pose the following questions: “How much of love is attention?”; “How much of care is patience?”; and “How much of life is coping?” An audio guide delves into different gender and racial theories on wayfinding—the way in which people orient themselves in a specific environment. The show also features a series of site-specific sculptures with images and other texts—some that are drawn from archival architectural and health guides, some in the form of Yelp reviews that warn against going to the park at night because of cops, and others written by the artist—that are positioned as wayfinding signage along the pathways of the park. The exhibition marks the artist’s first solo museum presentation.

A decade after the release of his last album, the American rapper, artist and activist Yasiin Bey—better known by his former stage name Mos Def—has partnered with the Brooklyn Museum to create an immersive multimedia exhibition where fans can experience his latest work in an innovative way. The show Yasiin Bey: Negus (until 26 January 2020) features large paintings by Julie Mehretu, José Parlá, Ala Ebtekar and a mural by Bey himself. Visitors are given headphones to listen to his new eight-track, 28-minute album, which will not be released in digital or analog format. In a previous interview, the Brooklyn-based rapper says he decided to release the album as an art installation to create “an environment that fosters a focused listening experience, as opposed to a hearing experience, and to couple that with a visual component”. The exhibition and album, which is titled after the word for “ruler” or “king” in the ancient Semitic language Ge’ez of Ethiopia, also marks the 20th anniversary of Bey’s debut studio album Black on Both Sides. Bey will perform the new album at the museum on 21 November.

It’s the last week to see Elle Pérez: from sun to sun (until 24 November)—a project commissioned by the Public Art Fund in collaboration with the French advertising firm JCDecaux. In August, a series of photographs by the Bronx-born artist were displayed in 100 bus shelters across more than 13 neighbourhoods in New York. The vulnerable photographs capture the artist’s family members and friends as well as communities and places where Pérez grew up and lived. The images, which are displayed in the spaces typically used for ads, are drawn from a suite of 16 black-and-white photographs and repeat six to seven times each. Most are sited near one another or on bus routes, and some are situated in bus shelters along routes the artist often took as a child. Pérez “observes the beauty of their surroundings and captures the humanity of these places, cumulatively revealing a kind of meditative self-portrai”, the curator Katerina Stathopoulou says in a statement. The project hopes to “inspire points of connection and conversation” and provide a moment to pause for New Yorkers traversing the city on their daily commutes.