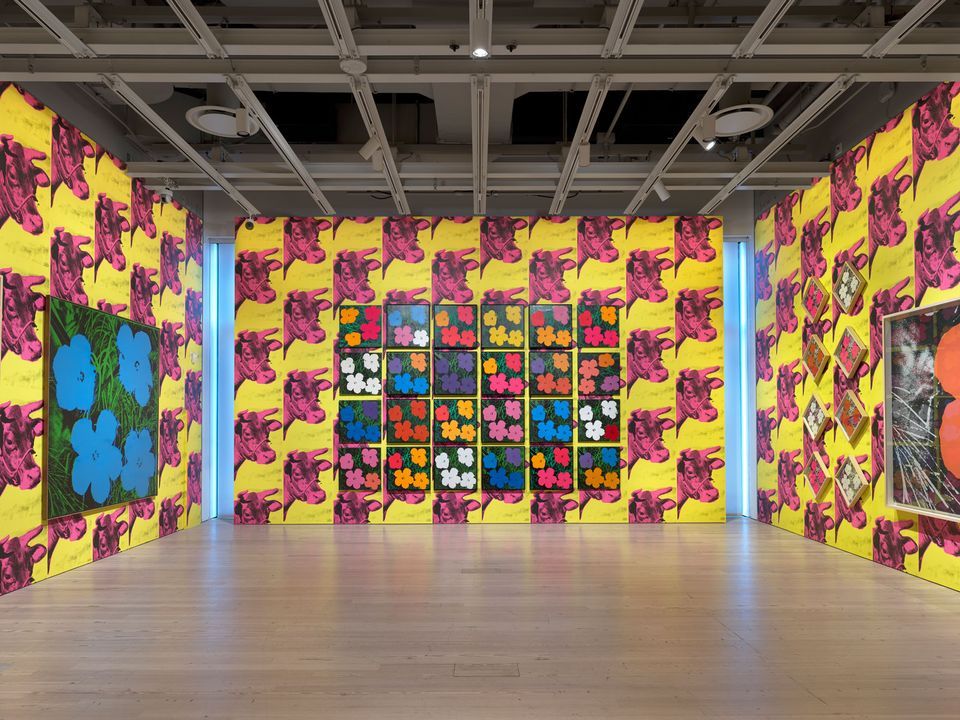 Installation view of the exhibition Andy Warhol—From A to B and Back Again Photo: Ron Amstutz. © 2018 The Andy Warhol Foundation for the Visual Arts, Inc/Licensed by Artists Rights Society (ARS), New York

In the art world, there’s only one Andy. From the first moments of the Whitney Museum’s major survey Andy Warhol: from A to B and Back Again (until 31 March), which envelops viewers in a room papered, floor-to-ceiling, with Warhol’s pink-and-yellow cow wallpaper and plastered with flower paintings just as colourful, the show is exciting. Even, or especially, for those who think they know all there is to know about him. The curator Donna De Salvo brings together telling examples from every phase of Warhol’s production, from gorgeous early drawings and shoe collages to the Marilyn, Elvis and Brando Pop paintings, portraits and self-portraits, the contents of one of his Time Capsules, Interview magazines, a colossal portrait of Mao, collaborations with Jean-Michel Basquiat, screen tests and other films—perhaps his most influential work—arranged in unpredictable ways that make emotional, aesthetic and historical sense of this formerly inscrutable artist. In the final gallery, Warhol’s varied approaches to abstract painting play off each other to enthralling advantage. For example, placing the 36-foot long “reversal” painting, Sixty-Three White Mona Lisas (1979), opposite a Last Supper overlaid with a camouflage pattern, is a masterstroke.

Was Warhol the draughtsman among your favourite parts of the Whitney’s survey? Head to the New York Academy of Art—of which Warhol was an early and ardent supporter—for the exhibition Andy Warhol: By Hand, Drawings 1950s-80s (until 10 March). “By focussing only on Andy’s drawings, this exhibition is a way to highlight without distraction Andy’s innovative process and experimentation which encompassed pen and ink, ballpoint pen, blotted line, graphite and acrylic paint,” Vincent Fremont, Warhol’s agent and co-founder of the Andy Warhol Foundation, says in a statement. The show has around 150 drawings, all from the private collections of the dealers Daniel Blau (who has never exhibited these works in the US), Paul Kasmin and Anton Kern. Many of the artist’s drawings have a guileless, childlike quality to them. They all seem very Warhol, even as they vary in style. In the loose, childish and bizarre Self-Portrait Andy Warhol at the Age of Two (done as an adult, with a poem on the bottom beginning “Here is Andy at the age of Two/Looking wistfully at you”) the small artist wears a butterfly like a hat. In the close-cropped nude Excited Male Torso, even the sparse lines rendering pubic hair seem charming, somehow.

Looking at Theodora Allen’s delicate, muted watercolour and oil-on-linen paintings that are filled with mystical symbology, psychotropic plants, full moons and other various celestial bodies is like falling into a Pre-Raphaelite-tinged hippie fever dream. The 33-year-old Los Angeles-based artist toes the line between transcendental and twee in her debut solo show in New York at Kasmin Gallery (until 9 March) with a slew of new paintings featuring ancient symbols, tarot tropes and floral imagery that are part surreal, part kitsch. While some of her previous paintings have smacked of a Stevie Nicks album cover—particularly one of guitar ringed by a floral wreath—her newest works at Kasmin are spellbindingly sincere in their quest for meaning through beauty.