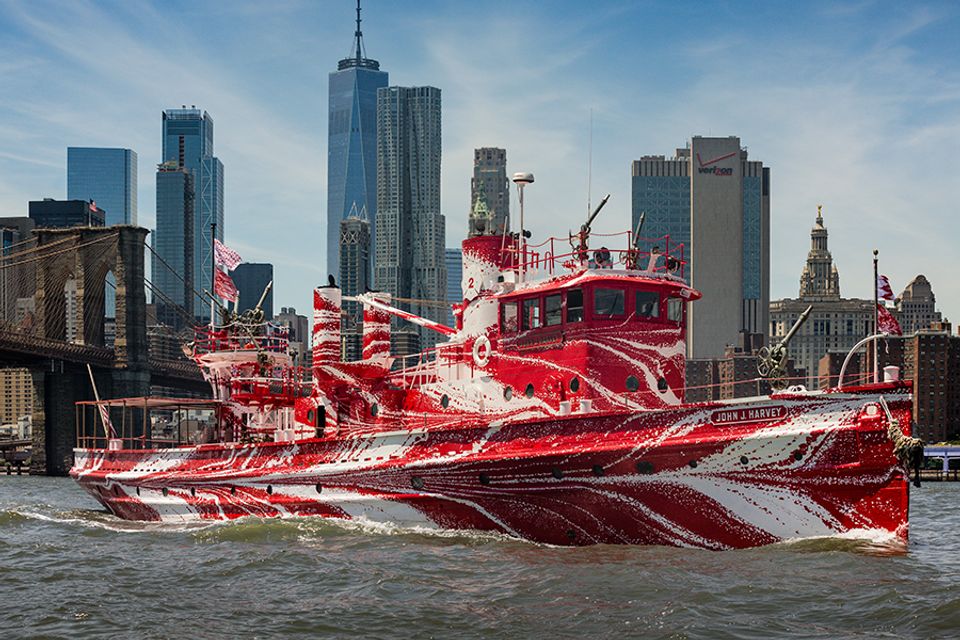 What do Cubism, Futurism and Vorticism have to do with wartime defence? Head to the Public Art Fund (PAF) commission Flow Separation (until 12 May 2019) by the New York-based artist Tauba Auerbach to find out. Auerbach has painted red and white designs on the historic J. Harvey Fireboat in the legacy of “dazzling”—motifs that pull from camouflage and the geometry of these avant-garde movements, painted on US and UK ships during the First World War to confuse enemy submarines waiting to strike. To make her splashy design—which also resembles the wake patterns objects create in water—Auerbach used the marbling technique, suspending ink in fluid, swirling it to create motifs and transferring the results onto paper. This weekend and next (30 September, and 6 and 7 October) are your last chances to hop aboard the historic boat at Hudson River Park’s Pier 66a for a ride around the city. Those who miss the boat—or get seasick—can enjoy seeing the work as a floating installation at Pier 66 through the spring.

The Museum of Modern Art (MoMA) explores how architecture helped bring together socialist Yugoslavia, a state of six ethnically interrelated but distinct areas, in the exhibition Toward a Concrete Utopia: Architecture in Yugoslavia 1948-80 (until 13 January 2019). The show has around 400 artefacts such as architectural models, photographs and film, many from municipal archives, by architects such as Bogdan Bogdanović and Svetlana Kana Radević, that look at the development of architectural culture in Yugoslavia, including some of the most dramatic examples of Brutalism and a mix of Modernist and local architectural styles. “There was a drive to pushing society towards a radical notion of democracy, but it never really worked to the degree that it was intended to,” says the show’s co-curator, Martino Stierli. But the experiment, he adds, demonstrates how “architecture can contribute towards building a collective civic space in a multi-ethnic society”.

Think exhibitions that group Old Master and Modern works are overdone? Endless Enigma: Eight Centuries of Fantastic Art (until 27 October) at David Zwirner, which has around 90 works made over a span of hundreds of years, might change your mind. Endless Enigma takes its cue from Alfred Barr’s landmark 1936 exhibition Fantastic Art, Dada and Surrealism at MoMA. (It even includes a 1936 Wallace Putnam plywood assemblage, The Mask of the Traveller, that featured in the MoMA show.) Among the most compelling groupings looks at the representation of the nude, in a gallery space dominated by a full-size 16th-century copy of Hieronymus Bosch’s Garden of Earthly Delights and a churning millwheel of four push-pull nudes representing the four elements, by the little-known Flemish Baroque painter Louis Finson. These are joined by 20th-century works by Louise Bourgeois, Leonor Fini, René Magritte, Gustave Moreau and Lisa Yuskavage. But extraordinary works like Piero di Cosimo’s Finding of Vulcan on the Island of Lemnos (around 1490), are reason enough to see the show.