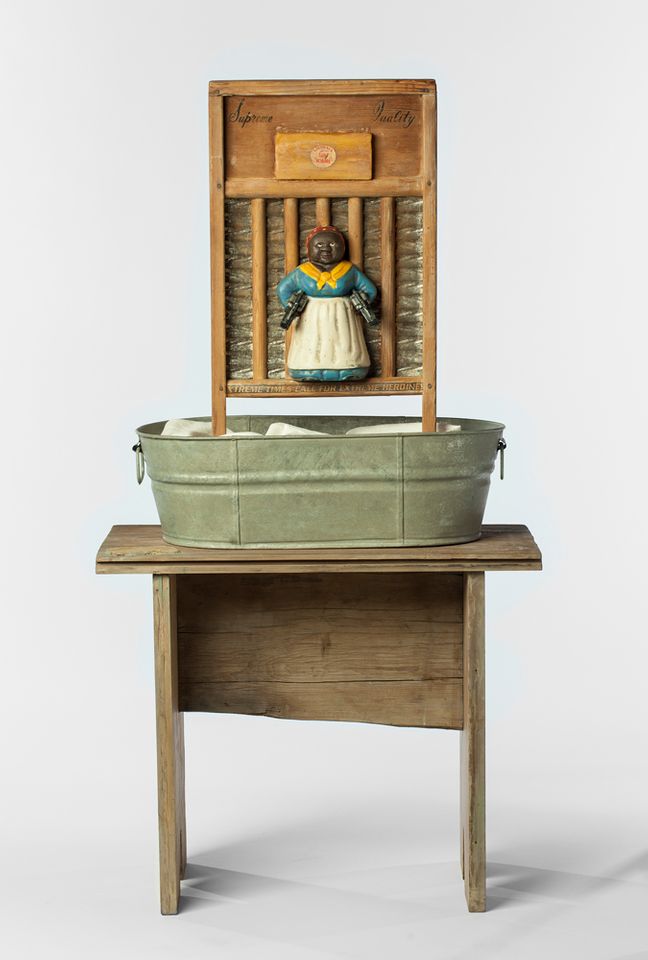 When Betye Saar: Keepin’ It Clean opened at the Craft and Folk Art Museum in Los Angeles, the nonagenarian Black Arts Movement and feminist artist explained: “I wanted to do an exhibition of my washboards because they are intimate and hands-on. It’s a body of work that I am still making, and the new works are inspired by the Black Lives Matter movement.” The show, which displays two dozen of Saar’s assemblage works on vintage washboards dating from 1997 to 2017, is currently on view at the New-York Historical Society (until 27 May). A group of unaltered vintage washboards in Saar’s collection, also displayed, is an effective way to further emphasise the power of Saar’s assemblage works, which reuse and reclaim racist tropes of African Americans, such as the mammy figure, Aunt Jemima or Uncle Tom. There are other works by Saar, such as the haunting mixed-media tableau A Loss of Innocence (1998), with an old photograph of a black baby girl on an antique chair, above which hangs a vintage white dress that casts shadows on the wall. It is a powerful reminder of the way black women and girls have been sexualised, and the sexual violence against them.

Lose (or find) yourself in the work at the New York-based artist Adelita Husni-Bey’s New Museum solo show, Chiron (until 14 April), named for the mythological centaur and “wounded healer”, who was evoked by the psychoanalyst Carl Jung to describe the analyst’s relationship with a patient. The heart of the show is a new video, also called Chiron (2018), based on a workshop Husni-Bey undertook with lawyers who provide pro-bono legal services to undocumented immigrants in New York. It looks at issues like secondary trauma, emotional depletion and guilt surrounding this work. Two older video works are also shown, including perhaps the artist’s most fascinating work, the Lord of the Flies-esque Postcards from the Desert Island (2010-11), showing a project in which the artist asked seven- to ten-year-olds at an experimental school in Paris to “build their own world”. You must mount a large stage installation to see another video work, 2265 (2015)—a reminder that the artist’s unscripted works are not technically “performed”, but that “we are in a lot of ways constantly performing” in our daily lives, she says.

Ring in the Year of the Pig with a visit to Eli Klein Gallery’s solo exhibition Shen Fan: Works in Abstraction, 1992-2017 (until 16 February). “A pioneer in the field, along with his Shanghai-based contemporaries Ding Yi and Yu Youhan, Shen Fan has set the gold standard for defining historically important abstract art in contemporary China,” says Eli Klein. Shen’s oil on canvas works, which have raised motifs that sometimes almost make them feel like bas-relief, are massive and imposing at a distance, and reveal a play between total abstraction and abstracted but figurative depictions. There is something incredibly charming and soothing about works like ShanShui-C-31 (2008), in which a raised black horizontal pattern on bare canvas breaks in two places into depictions of mountains, or ShanShui-C-22a (2007), in which a cream-coloured pattern is interrupted in one place with a leaf-like motif. Textured monochrome pieces in saturated hues are also eye-popping.