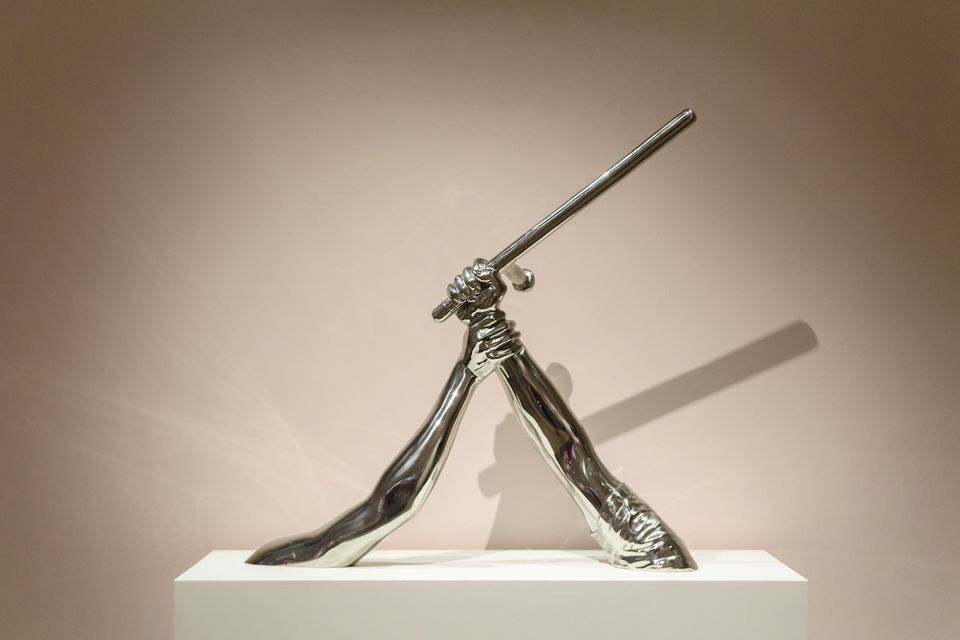 As part of a yearlong thematic focus on power, the Rubin Museum of Art’s exhibition Clapping With Stones: Art and Acts of Resistance (until 6 January 2020) brings together the work of 10 international artists—including Nari Ward, Kader Attia and Pallavi Paul—who consider the meaning and symbols of power structures in their practice. The show spans installations, paintings, photographs, sculptures, videos and textiles that “articulate a wide variety of societal and political themes, unveiling the power that exists in the unseen, hidden and unrecorded”, says the guest curator Sara Raza. Among the highlights is a stainless steel sculpture with a mirrored finish called Strike (2018) by the American conceptual artist Hank Willis Thomas: It depicts a violent clash while inviting the viewer to “look at the work and through the work at the same time and see their own reflections” and contemplate their role in the conflict, the artist has said.

Monica King Contemporary’s inaugural exhibition April Marten: Frances Wasn’t a Saint (until 12 October) profiles a multidisciplinary artist who “subverts the dominant structures through performance, colour and symbolism”, Monica King says. King—who has more than 20 years of experience in the art market, including runs at Pace and Kasmin—launched her eponymous gallery to “support both emerging and established artists working in various media and from various cultural, geographical and social spheres”, she says. “Choosing Marten for our inaugural show was important as I wanted an artist who was not yet well-known in New York—to let people have one of those rare ‘aha’ moments that collectors can be fortunate enough to have in the process of discovering art and artists.” King is the latest dealer to open shop in Tribeca, a burgeoning arts hub as dealers migrate from Chelsea and art world veterans launch their own enterprises in the neighbourhood.

It’s the last week to see the Costume Institute’s annual exhibition Camp: Notes on Fashion at the Metropolitan Museum of Art (until 8 September). Camp “used to be a gay sub-culture and a private language”, the curator Andrew Bolton has said—until it was mainstreamed by Susan Sontag’s groundbreaking 1964 essay Notes on Camp. The show features around 250 objects from the 17th century onward and traces camp’s roots back to the French term se camper (to posture boldly) and to the theatrical lifestyle at the court of Louis XIV. Recent designers in the show include Jeremy Scott for Moschino, Sarah Burton for Alexander McQueen, Virgil Abloh for Off-White c/o Virgil Abloh and Bertrand Guyon for the House of Schiaparelli, whose pink flamingo ensemble conjures up the camp film-making trailblazer John Waters. “In the 1980s and also now, camp is really having a heyday—as it does in times of political and social unrest,” Bolton says. “It reflects the zeitgeist as a subversive and progressive concept.”