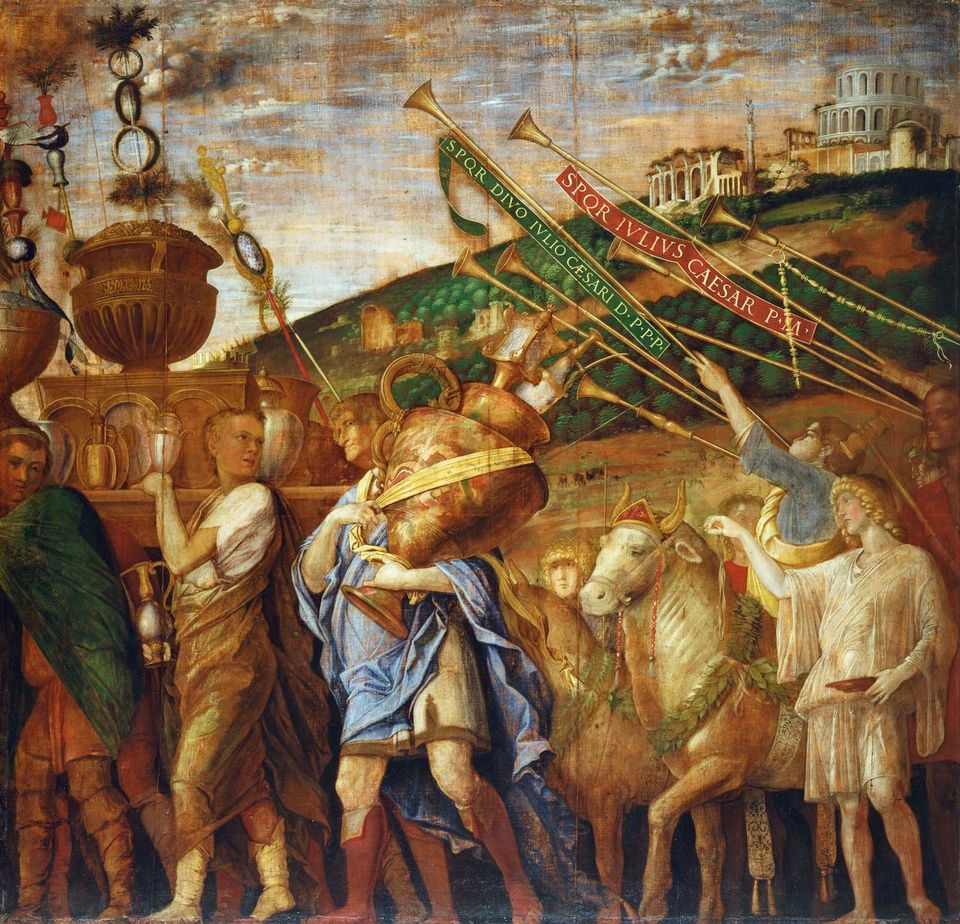 Andrea Mantegna's The Vase Bearers (around 1484-92), which is one of nine paintings that make up the Triumph of Caesar series Royal Collection Trust / © Her Majesty Queen Elizabeth II 2017

By the time Charles I (1600-49) was lead to his execution in 1649—famously wearing two shirts to avoid his shivering at the cold being misinterpreted as fear—, he had amassed one of the greatest collections of art in British history, consisting of around 1,500 paintings and 500 sculptures, which were quickly sold off and dispersed. Three and a half centuries later, Charles I: King and Collector (27 January-15 April) at the Royal Academy of Arts (RA) reunites 140 works from the collection in a landmark exhibition, which includes works by titans such as Durer, Titian, Rubens, Velazquez, Rembrandt and the king’s artist Anthony van Dyck. Many of the works were recovered by the monarchy and now form part of the Royal Collection collection, including Albrecht Dürer’s exquisite oil on panel titled Burkhard of Speyer (1506) and the poignant Portrait of an Old Woman (1627-29) by Rembrandt, who used his mother as the model. The RA’s largest gallery is devoted to Mantegna’s monumental Triumph of Caesar series, with each of the nine works measuring more than 2.5 metres in height and width. Joining these are star loans from abroad, such as Van Dyck’s Charles I in the Hunting Field (around 1636), from the Musée du Louvre in Paris, which returns to England for the first time since king’s execution. The exhibition’s co-curator Per Rumberg says: “Van Dyck is really the protagonist of the show.” Adding that when we think of—or envisage—Charles I, we are in fact seeing the king “as painted by Van Dyck”.

The Hayward Gallery reopens this week after a two-year refurbishment with a retrospective of the German photographer Andreas Gursky (until 22 April). The Brutalist building’s skylights have been opened up again, the brass handrails have been buffed and its shuttered concrete walls has been cleaned using a technique usually reserved for classical statues, exposing their woodgrain imprint. The exhibition is a great opportunity to see Gursky’s earlier works from the 1980s and 1990s that many will be less familiar with than his huge later works, which are often digitally manipulated. There are some exquisitely serene and beautiful photographs such as Krefeld, Chickens (1989) where a central cockerel stares directly at the camera while his fellow poultry scratch about; Dolomites, Cable Car (1987) where the single red cable car seems suspended in mid-air as its lines are obscured by mist in the tranquil landscape; and Aletsch Glacier (1993) where you can feel the cold almost creep out the frame.

Spot the art stars of tomorrow in Bloomberg New Contemporaries (27 January-3 March), which opens this weekend at the artist-run space Block 336 in Brixton, after having traveled down from the Baltic Centre for Contemporary Art in Gateshead. For more than half a century, New Contemporaries has championed recent UK art graduates and previous participants include David Hockney, Frank Auerbach, Paula Rego, Tacita Dean, Chris Ofili, Ed Atkins, Marvin Gaye Chetwynd and Laure Prouvost. This year’s guest judges, the artists Caroline Achaintre, Elizabeth Price and George Shaw, have selected 47 emerging artists whose works ranges from a film inspired by post-war theatre and TV sit-coms to fictionalised histories based on old family photographs.