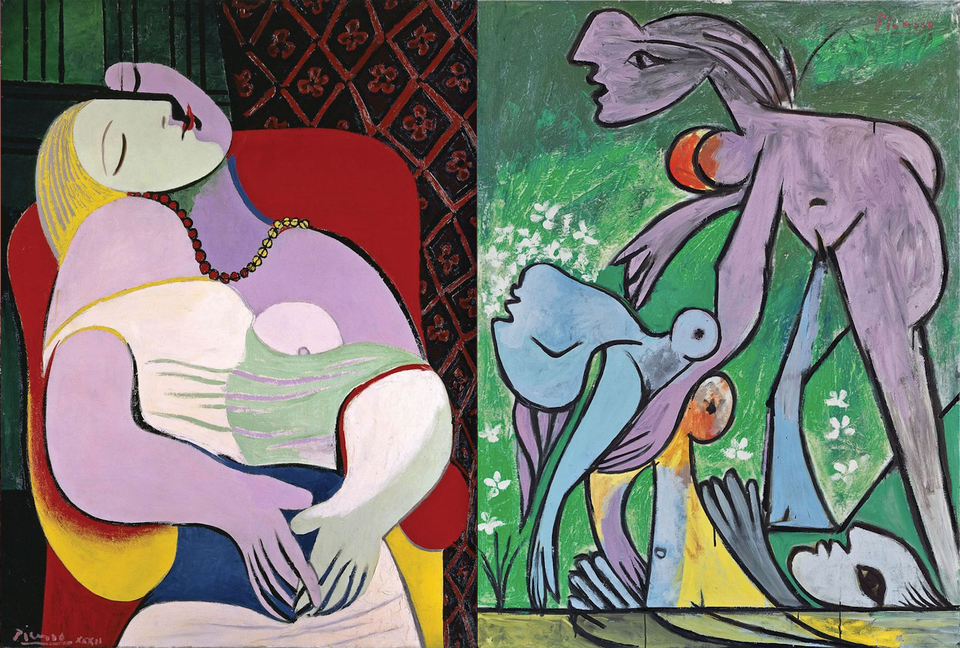 Pablo Picasso’s prodigious productivity was such that many single years throughout his career could be the subject of a major show. But the year that is the focus of Tate Modern’s latest blockbuster, 1932, was a crucial 12 months. Professionally, Picasso had his first retrospective in Zurich and published the first volume of his catalogue raisonné. He also produced some of his greatest paintings. Not for the first time, those works emerged from a turbulent private world. In the early 1930s there was the wealthy public figure Picasso, living comfortably with his wife Olga and son Paulo in his Parisian apartment, and the artist furiously working in his studio in the apartment above, often reflecting his sexual adventures with his mistress Marie-Thérèse Walter. The great photographer Brassaï, after a visit in September of that year, described the setting for this duality: the family home, he said, was “one of the centres of society life” and the studio was a pigsty. But masterpieces poured from that mess. Picasso 1932—Love, Fame, Tragedy (until 9 September) includes more than 100 works tracing one of the Spanish artist’s most important years. (For more on Picasso, listen to this week's podcast)

One of the most celebrated painters of the Spanish Golden Age, Bartolomé Esteban Murillo is now famous for his devotional works and paintings of ragamuffins. This cabinet exhibition at the National Gallery, marking the 400th anniversary of his birth, brings Murillo’s hitherto overlooked work as a portraitist to the fore. Of his 16 securely attributed portraits, six are on display in Murillo: the Self Portraits (until 21 May). The title is slightly misleading as there are only two extant self-portraits; these are the show’s star attractions. Shown together for the first time in centuries are the self-portrait of around 1650-55, the artist as a young man, on loan from the Frick Collection, New York, and that of around 1670, Murillo in his maturity, from the National Gallery’s own collection. Murillo was held in high esteem from his lifetime until the early 20th century when his star waned. Only in recent years has his work, along with other Spanish Old Masters, come back to the fore. This exhibition is a twice-in-a-lifetime chance (it travels to the Frick) to see how the Sevillian master captured the human face.

When photography was only a few decades old, a disparate group of individuals formed an alliance that would break enormous ground in the medium. Lewis Carroll, Julia Margaret Cameron, Oscar Rejlander and Lady Clementina Hawarden are gathered in a new exhibition, Victorian Giants: the Birth of Art Photography (until 20 May) at the National Portrait Gallery. “We think of photography as being invented in 1839 [..] but for the first 12-13 years, it was a very imperfect medium,” says Phillip Prodger, the head of photographs at the Gallery and curator of the show. “It wasn’t until 1851 when Fredrick Scott Archer invented wet plate collodion glass photography, which enabled photographic emulsions to be put on glass, that all sorts of creative possibilities became available,” he says. Rejlander’s Two Ways of Life (1856-57) is a prime example of an early collage technique pioneered by the Swedish-born photographer. The image was constructed by combining more than 30 negatives to create the final scene of numerous figures. The exhibition also includes Lewis Carroll’s photographs of Alice Liddell (who inspired his book Alice in Wonderland) as both a child and adult, and portraits of Charles Darwin and Alfred Tennyson by both Cameron and Rejlander.