From paths towards enlightenment to Kanye's rants 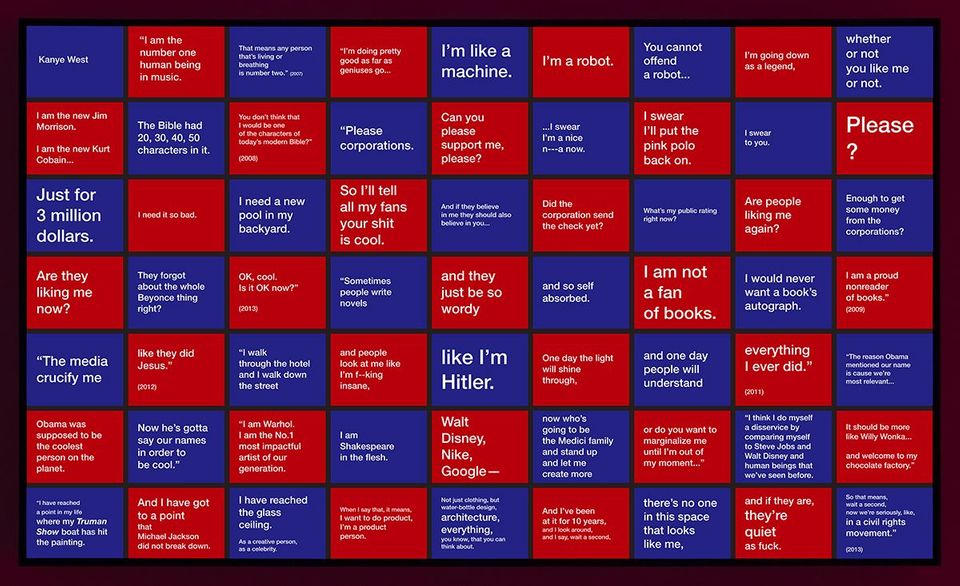 For his first solo exhibition at Greene Naftali Gallery, On Non-Visibility (until 9 June), the artist Tony Cokes has stationed several animated text-based videos and lightbox displays that bluster and yell with found quotations or excerpted press reports, often to the accompaniment of popular music. “I’m interested in the possibilities of not trafficking in images,” the artist explains. Dating from 1988 to now, the works foreground Cokes’s preoccupation with citation and non-visual materials, the cultural afterlife of speech acts and celebrity rants, and the shadows of power, politics and violence. For Face Value (Kanye West) (2018), Cokes collects the hip-hop artist’s brazen utterances (such as “I am Shakespeare in the flesh”) on solid blue and red tiles, where they appear surgically exposed and strangely mechanical. Something similarly incongruous occurs in the video featuring statements by Donald Trump, sound-tracked to the UK synth-pop band, Pet Shop Boys.

Whether they use oil paint, VR, sound art, animation or robots, the five artists commissioned to create new works for the Guggenheim Museum show One Hand Clapping (until 21 October) are all thinking about the future. “There is a single-vision, homogenous way of understanding the future that is based off wealth and technological developments, and enforced by globalisation,” says the show’s curator Xiaoyu Weng. “We’re losing our imagination for a different kind of future that is locally embedded.” For this third and final installment in the Robert H.N. Ho Family Foundation Chinese Art Initiative, each artist has made work from their “personal, localised perspective”. Duan Jianyu’s oil painting explores the tensions in China’s transitory places where the urban meets the rural, while Wong Ping’s colourful animation Dear, can I give you a hand? (2018) focusses on China’s aging population against the backdrop of the digital economy.

Discover the path to enlightenment—and the more concrete journeys the Italian scholar Giuseppe Tucci made to Tibet between 1926-48—at the Asia Society’s exhibition Unknown Tibet: the Tucci Expeditions and Buddhist Painting (until 20 May). The show has around 50 paintings from across Tibet, collected by Tucci—one of the first Westerners to visit the region—dating from the 13th to 19th centuries. Separate sections look at the two paths to enlightenment: the Path of the Sutra (religious discourses attributed to a Buddha), which includes a group 14 images from the 17th century that show important followers of the Buddha in gorgeous blue and green landscapes; and the Path of the Tantra, which are the esoteric rituals and meditation practices, with works intended as tools for the path to enlightenment. The material support of the works is also beautiful: take time to look at the sumptuous woven silk fabrics, sometimes fraying, that surround the paintings. The show also includes archival photographs of Tucci’s Tibetan travels.