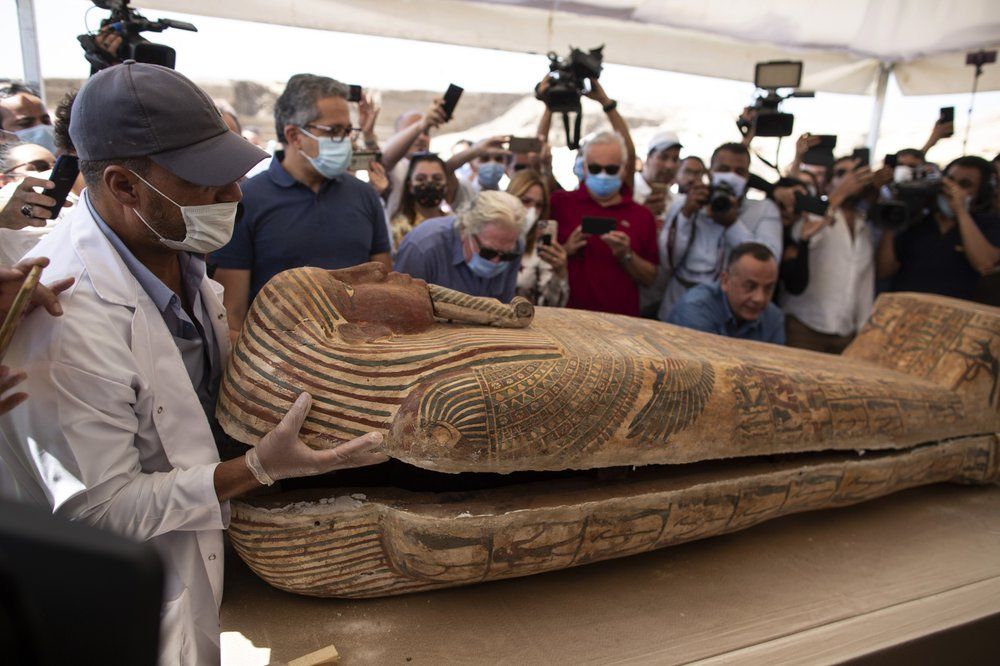 An archaeology worker opens a sarcophagus at the Saqqara archaeological site, in the presence of journalists and officials AP Photo/Mahmoud Khaled

Egyptian archaeologists have discovered 59 ancient coffins in burial shafts at the necropolis of Saqqara, just south of Cairo. The announcement was made during a press conference, where the colourful coffins were placed on display.

This is “a big discovery,” says Khaled El-Anany, Egypt’s Minister of Tourism and Antiquities. The wooden coffins date to Egypt’s 26th Dynasty, making them around 2,600 years old, and bear perfectly preserved painted decoration and hieroglyphic inscriptions. Most of the coffins still contain mummies, including one opened by archaeologists during the press conference. Preliminary investigations suggest that these individuals served as priests and high officials.

The Egyptian team, led by Mostafa Waziry, secretary general of Egypt’s Supreme Council of Antiquities, began excavating the burial shafts two months ago. The three shafts so far uncovered are between 10 and 12 metres deep, with the coffins found divided between them. Among the finds were 28 wooden statuettes of Ptah-Sokar, a god of the necropolis, and a bronze statuette of Nefertum, a god who represented the lotus blossom from which the sun god rose, which had an inscription on its base identifying its owner as the priest Badi-Amun. There were also amulets and shabtis—small figurines believed to magically perform agricultural work for the dead in the afterlife.

“We know from geophysical surveys that there was a vast network of temples, in addition to tombs, here, and [the discovery of the coffins] will be valuable to expand our knowledge of the cults that operated at Saqqara based on the inscriptions,” says Campbell Price, the curator of Egypt and Sudan at the Manchester Museum. “Coffin caches of this type are far from exceptional, but they tend to come from Luxor in the south. The real value of the recent find is the light these examples throw onto northern coffin styles, and no doubt also names and titles that previously have not been firmly associated with the Saqqara area,” Price adds.

The Egyptian team expect to discover more coffins as excavations continue. There is “an unknown number of coffins still in situ in the three shafts,” says El-Anany, adding that the objects will join the collection and be displayed at the new Grand Egyptian Museum, in Giza, due to open by the end of the year. “So today, it’s not the end of the discovery. I consider it’s the beginning of the big discovery.”