While the president is the first to allow Title III of Helms-Burton Act to be used, some whose collections were taken doubt it will have an impact 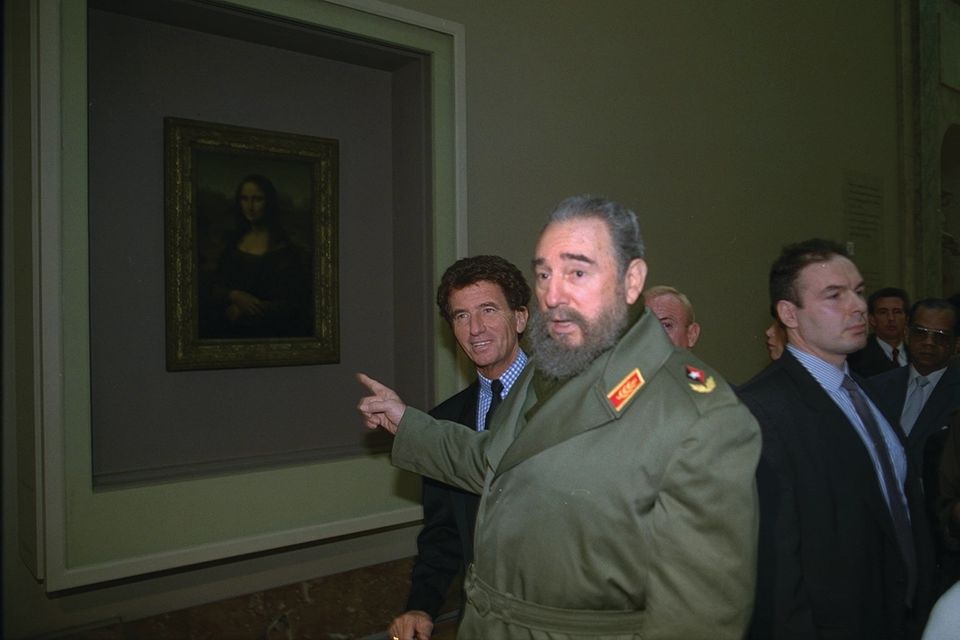 The US's Helms-Burton Act, which covers art seized by the regime of Fidel Castro (pictured visiting the Louvre in Paris in 1995) is opposed by governments in Europe and Latin America due to its implications for trade Alain Nogues; Sygma/Sygma via Getty Images

A provision of a 1996 law toughening sanctions against Cuba, recently put into effect by US President Donald Trump, allows US citizens to sue for the recovery of property including art seized by the island nation’s Communist regime since the Cuban Revolution of 1959. “There are people in Miami who have been waiting for this day. Even people who are vehemently anti-Trump are excited by this,” says a lawyer who has followed claims on art seized in Cuba. “Most people thought that there would never be a president who was bold enough or crazy enough to do this.”

The Cuban Liberty and Democratic Solidarity (Libertad) Act, commonly known as the Helms-Burton Act after its Congressional sponsors, was signed into law by the then President Bill Clinton. Title III of the law enables US citizens, including Cubans who were later naturalised, to sue anyone trafficking in property confiscated by the Cuban government. Another provision of the law, Title IV, blocks entry into the US for anyone who traffics in confiscated Cuban property, which could apply to art dealers and auction house employees and their families.

Governments in Europe and Latin America have opposed the law, saying it is a restraint on international trade and sovereignty, and all US presidents have chosen to suspend Title III at six-month intervals since it was passed. According to one lawyer who monitors Cuban claims, “Title III was never enacted because it was meant to be a threat; it was never meant to wage war.”

That changed in May, when Trump allowed the suspension to expire, a move seen by many as punishment towards Cuba for its support of the military regime led by Nicolás Maduro in Venezuela, which the US has also hit with sanctions. Soon after, Javier Garcia-Bengochea, a Cuban-born neurosurgeon in Jacksonville, Florida, filed the first Title III lawsuit, against Carnival Cruise Line. Garcia-Bengochea is the heir of shares of a port terminal and warehouses in Santiago de Cuba that were seized by the regime of dictator Fidel Castro, and which Carnival now uses to transport tourists to the island. A painting by Francesco Guardi from the family’s collection is in the Museum of Fine Arts in Havana, although Cuban officials say the work was a gift from a family member and have refused to return it.

So far, no lawsuits have been filed to recover works of art under Title III, although many—including paintings, public sculpture, architecture, books and decorative arts—were confiscated after the Revolution, and objects seized from Cuban collections have passed through the trade in the US and Europe. Obstacles in the Helms-Burton Act include a high bar for claims, allowing only property worth at least $50,000 at the time of seizure in 1959—around $400,000 today—to be recovered, which excludes most art that was confiscated. The filing fee for lawsuits is $6,458 to discourage a flood of claims.

Cuban-Americans who fled the island have long made seized property a political issue, however. Among them are internationally known collectors, such as the Fanjul family, sugar growers whose vast lands were taken along with their art collection, which included paintings by Joaquin Sorolla that remain missing. A former family villa is now the Havana Museum of Decorative Arts.

In 2005, The Fanjuls leveraged support from US politicians and threatened Sotheby’s with visa penalties under Title IV of the Helms-Burton Act after learning that the auction house asked Sorolla’s great-granddaughter to authenticate one of the family’s missing paintings. Sotheby’s refused to disclose where the picture was, the Fanjuls’s lawyer said at the time, although it did issue a policy directive listing the names of painters, collectors and dealers linked to art seized in Cuba, and ordered its employees to report and hold any such work. Christie’s adopted the same position. None of the Sorolla paintings has surfaced, however, and the Fanjul family did not respond to requests for comment on the implementation of Title III.

The Castro regime also seized the collection of Olga Lengyel, an Auschwitz survivor and US citizen who lived in Havana and owned works by Picasso, Degas, Goya, Van Gogh and Hans Memling, now valued in the hundreds of millions of dollars. After Lengyel fled Cuba for New York in 1959, she attempted to recover her collection and filed a claim with the Foreign Claims Settlement Commission of the US Justice Department, which the Cuban government ignored. A foundation that inherited her estate renewed the claim in 2015, but her art remains lost.

Also still missing are works by Diego Rivera once owned by the family of Guillermo Marmol, a Cuban-born entrepreneur based in Dallas. Marmol planned a lawsuit under Title IV of the Helms-Burton Act against Sotheby’s and another firm that sold his family’s pictures, but relented when the companies agreed to cooperate. He remains sceptical that recoveries will be made under Title III. “It’s so unlikely that it makes me wonder why anybody else would think it’s likely,” Marmol says. He compares Cubans’ efforts to recover art with restitution claims made by Holocaust victims and their heirs: “I think the Jewish people have the right to get their art back. I just think that I do, too.”

Appeared in The Art Newspaper, 315 September 2019
More NewsTopicsCuba US politicselection 2020