Four years after being stolen by white nationalists in Tennessee, a flag work bearing the words He Will Not Divide Us, a protest of Donald Trump’s presidency by Luke Turner, has been recovered by the FBI and returned to the British artist.

The wider project, consisting of a livestream of the flag, was subjected to multiple attacks from far-right extremists from the outset. Created as an “explicit symbol of resistance to the divisiveness of the last US presidency”, it was first installed at the Museum of the Moving Image in New York on the day Trump was inaugurated on 20 January 2017. But, after being repeatedly vandalised, the work had to be relocated several times, first to Albuquerque and then, after the theft, a second version of the flag was sent to FACT in Liverpool, UK and Le Lieu Unique in Nantes, France. 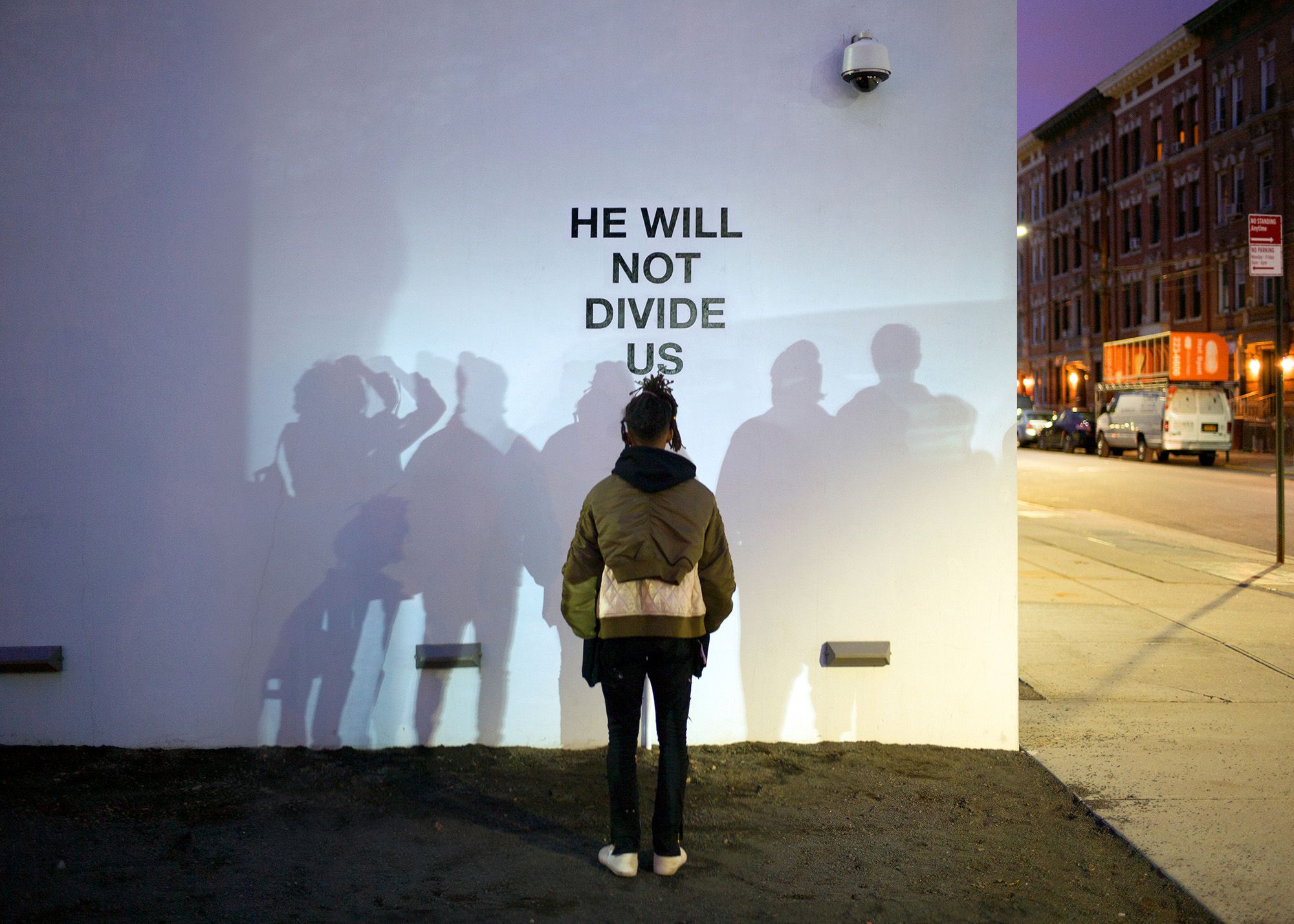 Turner says the attacks included “numerous instances of white supremacist vandalism, more than two dozen bomb threats directed at the museum hosting it in New York, two arson attacks and a murder plot in which [he] had to be evacuated in the middle of the night by security services while working at another museum in Europe”.

Then, in March 2017, the flag was stolen during a raid on an undisclosed location in Tennessee, thought to have been carried out by members of the now defunct neo-Nazi Traditionalist Worker Party. Photographs of the flag, which was replaced with a Trump “Make America Great Again” hat, were later posted on far-right 4chan, 8chan and Discord forums. In March 2017, the flag was stolen during a raid on an undisclosed location in Tennessee Courtesy of Luke Turner

Despite being witnessed, both online and in real life, by Turner and others as it happened, the US police were unable to track down the perpetrators.

It wasn’t until the end of 2019 that Turner was alerted to a photograph of a man with a Nazi Totenkopf tattoo on his left hand, wearing a “White Power” T-shirt, standing in front of the He Will Not Divide Us flag. The image had been published in August 2019 by the Independent newspaper, in a photo essay by Reuters photographer Jim Urquhart under the heading “The far-right plot to normalise white supremacy in the US”.

“I knew instantly that this was not simply a reproduction,” Turner says, adding that he “wasted no time in passing this new information on to the FBI”. The bureau’s specialist Art Crime Team has been working on the case since early 2018.

After several months of silence, in late 2020, Turner received a call from the FBI confirming they had retrieved the work. The Art Crime Team did not respond to requests for comment and, according to Turner, were unable to disclose details of the operation to reclaim the work.

Describing the heist as “one of the most high-profile contemporary art thefts in recent years, and likely the only such crime perpetrated by organised Nazis against a Jewish artist since the 1940s”, Turner says its return marks a “moment of immense catharsis”, but “does not represent justice for the actions of those responsible”.

The flag now “bears various stains and splatters”, Turner says, but remains “gleaming in its own modest way”. He adds: “The sentiments of the words it carries endure, unblemished by the darkest of ideologies that it has spent most of its existence in proximity to.”