Two become one: Mantegna painting reunited in National Gallery London show for first time in up to 500 years

Update: Andrea Mantegna’s The Resurrection of Christ (around 1492) has now arrived in London from Bergamo and was installed yesterday (6 December) in the National Gallery’s Mantegna and Bellini exhibition. 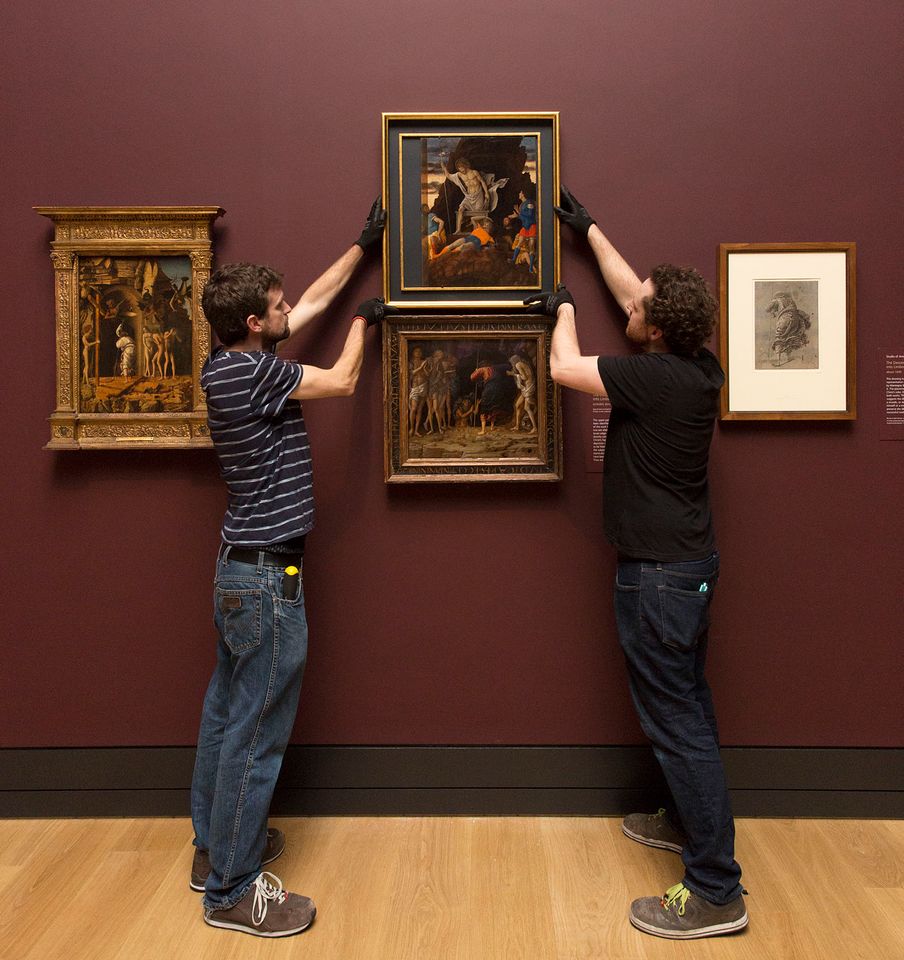 Andrea Mantegna’s painting The Resurrection of Christ being installed on 6 December above The Descent of Christ into Limbo (both around 1492) © The National Gallery, London

Two panels of a single painting by the Renaissance master Andrea Mantegna are to be reunited for the first time in as much as 500 years at the National Gallery in London this week. The pair will be unveiled together to the public on 6 December in the exhibition Mantegna and Bellini (until 27 January 2019).

It is not known exactly when the tempera paintings, depicting two distinct moments in the story of Christ’s resurrection, were separated. “It could have been 500 years ago, or they may have been split in the 1600s, when the Gonzaga family lost control of Mantua,” says Caroline Campbell, the curator of the exhibition. “It’s been at least 300 years since they were seen together.”

The upper section, the Resurrection of Christ (around 1492), held in the collection of the Accademia Carrara in Bergamo since the 19th century, was only recently re-attributed to Mantegna after a small cross was discovered at the bottom of the frame, which led the curator Giovanni Valagussa to postulate that it must have been part of a bigger panel.

“That’s the half that’s been unknown–until now,” Campbell says. “Giovanni Valagussa found it in his store, he was writing a catalogue of Italian 15th-century paintings and he thought this picture looked far too good to be a copy. So he started investigating and that’s when this discovery was made.”

Since the positive attribution in May, the Bergamo panel, which has been dulled by varnish applied in the 19th century, has undergone restoration. “We are thrilled they are choosing to show it for the first time at the National Gallery,” Campbell says. 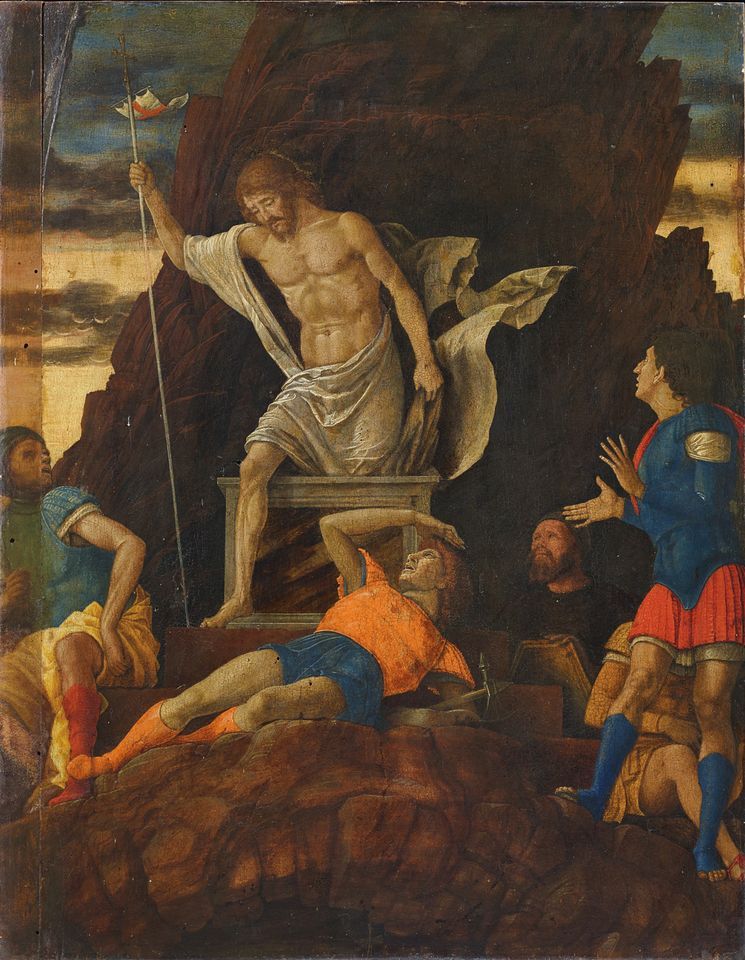 Attributed to Andrea Mantegna The Resurrection of Christ (around 1492) © Fondazione Accademia Carrara, Bergamo 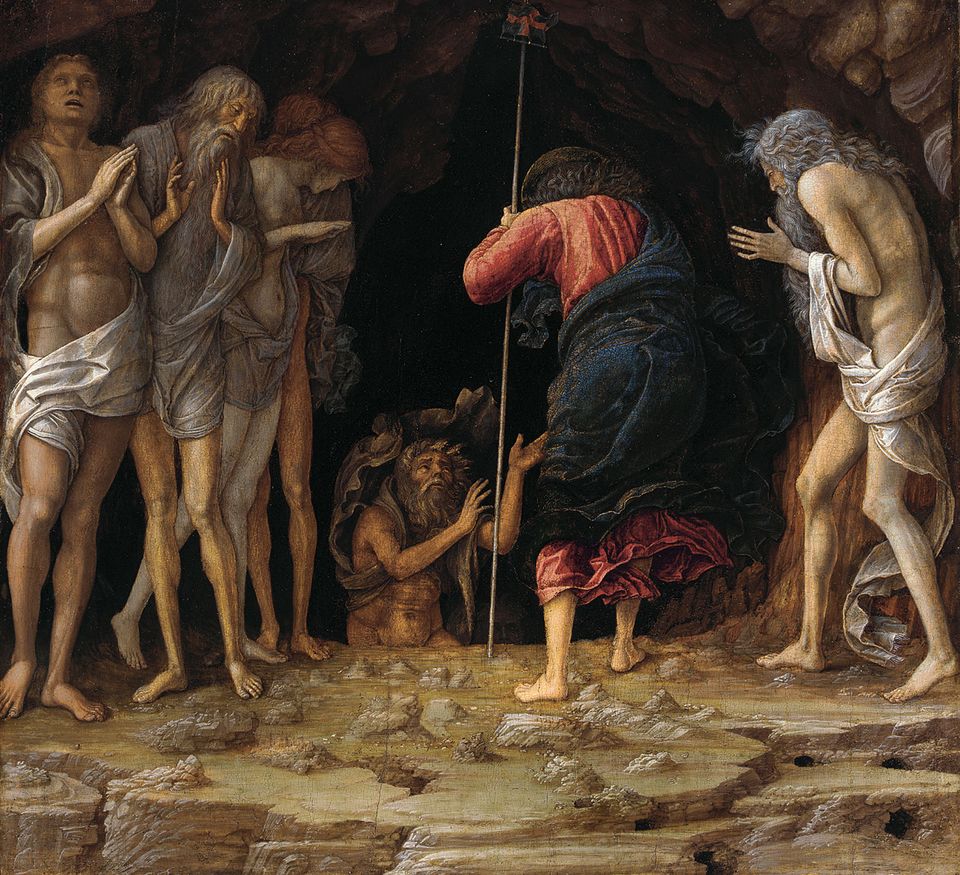 Andrea Mantegna, The Descent of Christ into Limbo (around 1492) © Courtesy of the owner / Photo: Sotheby’s New York

However, at the beginning of the 20th century, following doubts cast on it by the renowned art historian Giovanni Morelli, it was variously attributed to Mantegna’s studio, as a contemporary copy and as having been painted by the artist’s son, Francesco Mantegna.

That was until the recent discovery of the small cross beneath the stone arch, which pointed to it having been part of a bigger panel–most likely depicting Christ’s descent into limbo. Comparisons were made with several works before the link was established with the privately owned autograph Mantegna.

“Mantegna is an extraordinary talent. Together with his brother-in-law Bellini, they are two of the greatest artists working in northern Italy in their time,” Campbell says. “It’s very rare that works by these artists become recognised and available, so for people to be able to see this work together again is just amazing.”