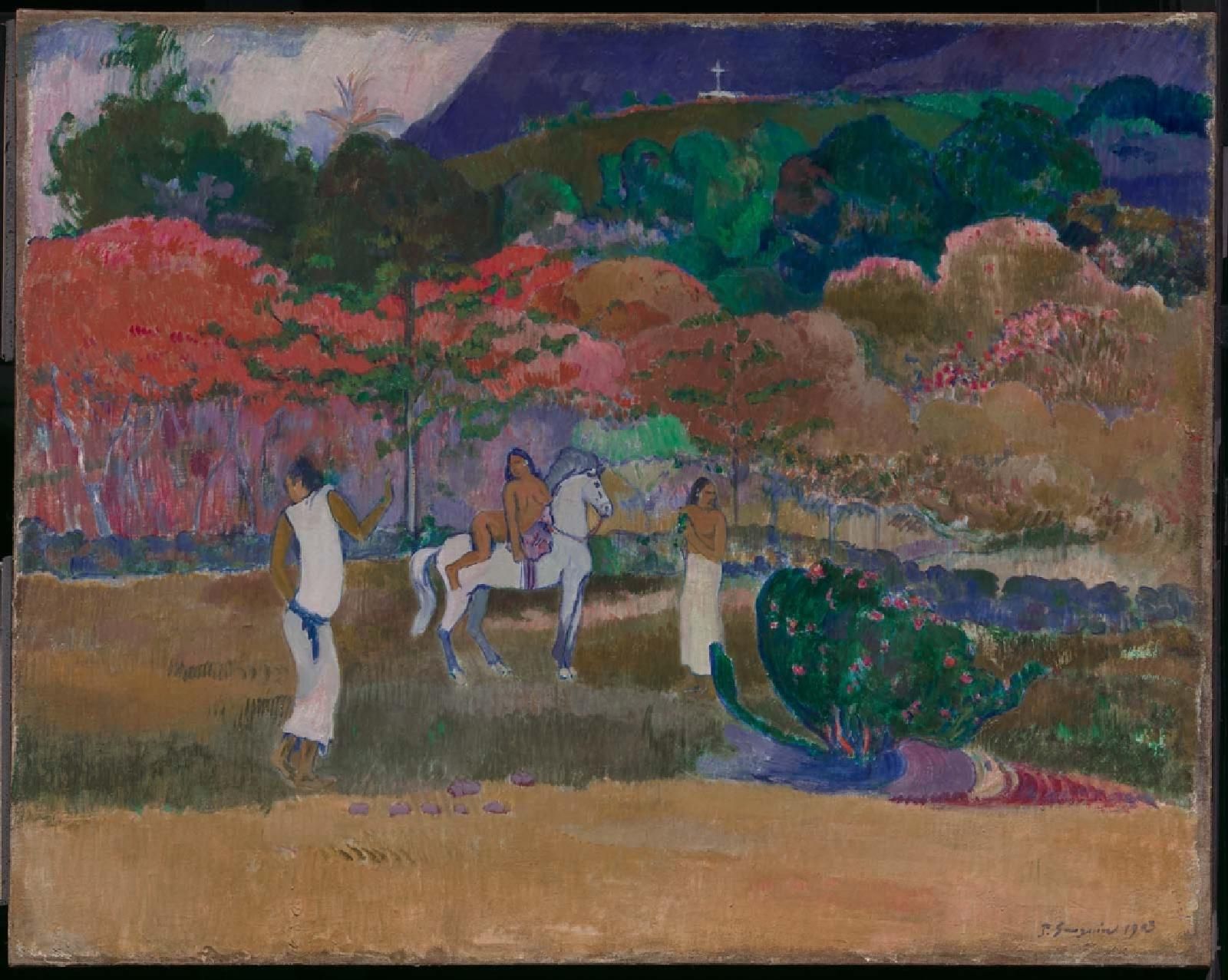 Paul Gauguin's Women and a White Horse (1903), part of the Museum of Fine Arts, Boston's collection

Two major US museums are to examine claims that their Gauguin paintings are fakes. The pictures are The Invocation (1903) at the National Gallery of Art in Washington, DC, and Women and a White Horse (1903) at the Museum of Fine Arts, Boston. Both are currently accepted by the museums as authentic and are assumed to have been painted on the Marquesas Islands, just a few months before the artist’s death.

Fabrice Fourmanoir, a French-born Gauguin enthusiast and collector who lived in Polynesia for many years, is convinced that both paintings are fakes. The Washington Post quotes him as saying that they were commissioned and sold by the avant-garde Parisian dealer Ambroise Vollard in the early 1900s.

Fourmanoir has credentials, since he helped expose the J. Paul Getty Museum’s sculpture Head with Horns as a fake. In January the museum admitted that the sculpture, bought for around $4m in 2002, is not an authentic Gauguin.

Questioning the Washington, DC and Boston paintings, Fourmanoir asks why Gauguin prominently depicted a cross in the cemetery above his Marquesan village, since he was then having a row with the Catholic bishop. He believes that the woman in The Invocation is “vulgar” and that Gauguin would never have painted her with pubic hair. In Women and a White Horse he believes that the background vegetation is more typical of Tahiti than the Marquesas. Paul Gauguin's The Invocation (1903), which is in the collection of the National Gallery of Art, Washington, DC

Both paintings have reasonably firm provenances stretching back to around 1908, but it is unclear how they reached Europe after Gauguin’s death five years earlier. Women and a White Horse was bequeathed to the Museum of Fine Arts in 1948 and The Invocation was donated to the National Gallery of Art in 1976.

Both museums are now discussing scientific examinations of their paintings. A Museum of Fine Arts spokeswoman told The Art Newspaper: “We have confidence in the attribution of Women and a White Horse, yet we always remain open to new scholarly research.”

A National Gallery of Arts spokeswoman says: “We take very seriously issues of attribution and provenance and we have looked hard at The Invocation, discussing it with scholars and including it in research projects. Gauguin's late works present particular challenges—he was often ill, and living in the Marquesas—and there are few reliable documents relating to his production there.”

She adds that both museums have “discussed the possibilities of scientific analysis”. This has been complicated by the coronavirus situation, but in the near future “we will resume discussions”.