As restitution momentum builds, director of Smithsonian’s National Museum of African Art says it could lead discussions for the return of looted Benin objects in US museum collections 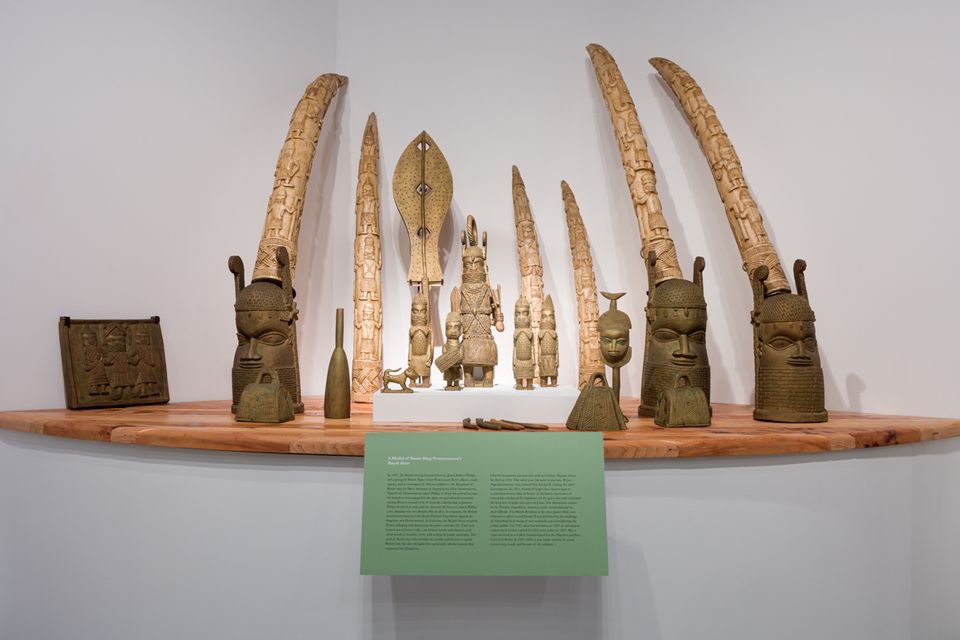 The Fowler objects featured here are part of a wood model of the royal altar for Oba Ovonramwen commissioned in 1921 by his son Eweka II after his father’s death in exile in 1914. The original burned in 1923, making this 1924 replica carved by royal guild artists in Benin an important piece of the historical record. Courtesy of the Fowler Museum

The University of California (UCLA)’s Fowler Museum is planning talks with the Legacy Restoration Trust in Nigeria on the future of 18 objects in its collection from the Kingdom of Benin. The discussions could lead to restituting the works, which were looted by British military forces in a raid on the Benin royal palace in 1897, its director says.

The Fowler’s statement, sent by email to The Art Newspaper, comes after the German government announced that it is laying the groundwork for a return of Benin bronzes in German museum collections. The planned restitution is part of a wide-ranging agreement with Nigerian stakeholders, represented by the Legacy Restoration Trust. The trust is planning to build a new museum in Benin City to house returning art stolen by British troops.

“The Fowler is committed to developing a process for considering the repatriation and restitution of African objects in its collection,” says Marla C. Berns, the Fowler Museum’s director, in a statement. “Our expectation is to begin discussions with authorities in Nigeria about the disposition of the 18 Benin objects in our collection in the coming months.”

She adds: “We know these discussions may lead to various resolutions, including either their return or a long-term loan that would permit us, as a university museum, to share them in teaching the history of the Kingdom of Benin.” She hopes talks “will lead to a solution based on the guidance of the Legacy Restoration Trust”.

After the 1897 looting, artefacts from Benin’s royal palace were sold off and scattered around the world; there are are now Benin objects held by more than 160 international museums. A large part of the Fowler Museum’s holdings of African art were donated in 1965 by the Wellcome Trust in London, which distributed the vast collections of the pharmaceutical industrialist Sir Henry Wellcome after his death, Berns says. Currently, three objects from Benin—two bronzes and one carved ivory tusk—are on display in a long-term exhibition.

“We are rewriting exhibition texts to contextualise the circumstances by which these objects came into our collection, including their provenance,” Berns says. “We have been able to reconstruct these biographies based on research funded by the Andrew W. Mellon Foundation.” Berns adds that the museum is “also pursuing conversations about potential repatriations in the context of Wellcome objects from Ghana and South Africa”.

Christine Mullen Kreamer, the chief curator of the Smithsonian’s National Museum of African Art in Washington, DC, suggested at a conference organised by Columbia University on 9 April that the museum could lead discussions on restitution in US museums with Benin items. She added that another conference planned for June this year could be the moment to establish a working group. The National Museum of African Art has 42 objects from the Kingdom of Benin; provenance research is ongoing.

“There are many colleagues out there who recognise completely that the time is not only right, it’s overdue to move forward with all deliberate speed,” she said. “The Smithsonian does have a process under way to develop a policy and a framework, not just for Africa but for other areas of the world connected to looted and colonial-era collections.”

Other US museums approached by The Art Newspaper said that they are either conducting provenance research or not yet ready to commit to restitution. The Cleveland Museum of Art has eight works from the Kingdom of Benin on view in its African arts gallery, five of which are thought to have been looted in 1897. The provenance of the remaining three is not yet clear.

“As all of these works are undergoing further research, the museum is not in a position to make a statement as to any future actions,” a spokeswoman for the museum says.

The Art Newspaper received similar statements from the Baltimore Museum of Art and the Museum of Fine Arts in Boston, which has 32 Benin objects on show in a dedicated gallery. The Metropolitan Museum of Art in New York, which holds about 160 objects traceable to the 1897 looting in Benin, declined to comment on whether the objects will be restituted.