The work, returned to the French heiress Léone-Noëlle Meyer in 2016, was meant to go back on display at Oklahoma’s Fred Jones Jr. Museum next year 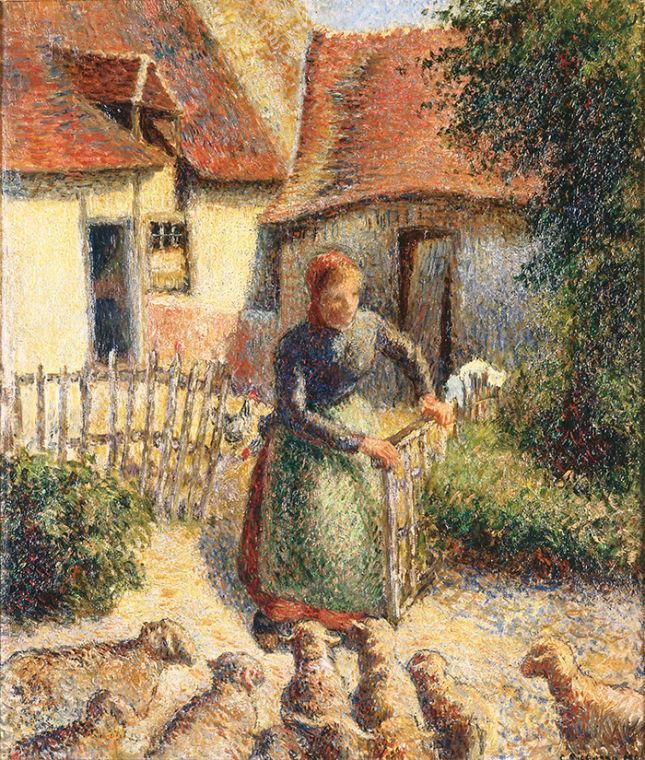 Léone-Noëlle Meyer, a French heiress who in 2016 agreed to share her family’s Nazi-looted painting with the University of Oklahoma’s Fred Jones Jr Museum of Art in a landmark restitution deal, has changed her mind. The once settled case is now back in court, as Meyer, 81, seeks to prevent Camille Pissarro’s La Bergère Rentrant des Moutons (or The Shepherdess Bringing in Sheep) (1886), from returning to Oklahoma for three years as part of a court-stipulated exchange, raising concerns from US museum groups. This week, in a joint letter backing the earlier deal, the leaders of the American Association of Museums (AAM) and the Association of Art Museum Directors (AAMD) wrote: “We hope that the current matter can be resolved quickly as in accordance with the settlement agreement so that not only will the painting be on view as contemplated, but, more important to us, that future potential consensual resolutions to Nazi-era claims will not be negatively affected by the current proceedings.”

Pissarro’s La Bergere, now on display at the Musée d’Orsay, was meant to travel to the Fred Jones Jr Museum, which previously held the painting, in 2021. But Meyer now wants to bypass the exchange and donate the work permanently to the Musée d’Orsay, her lawyer says, “as it should indeed never leave the French national territory again”. The University of Oklahoma Foundation, which runs the museum, is demanding that Meyer honour the deal that she signed. “They’re setting back the claimant community, I think, tremendously,” says Thaddeus Stauber, the lawyer for the University of Oklahoma Foundation.

In a letter sent to the Fred Jones Jr Museum of Art's director, Laura Lott of the American Association of Museums (AAM) and Brent Benjamin of the Association of Art Museum Directors (AAMD), seem to agree: “We are concerned that if a party to an agreement that resolves a Nazi-era claim does not abide by its provisions, the parties to future disputes may be reluctant to enter into agreements and abide by their provisions.”

Neither side disputes that the Pissarro in question was looted. The painting belonged to Raoul Meyer, the son-in-law of the co-founder of the historic department store Galleries Lafayette. After Germany invaded France during the Second World War, Raoul Meyer placed the painting in a bank vault, which Nazi agents breached. The work ended up at the Jeu de Paume museum in Paris, where Nazi leaders shopped for pillaged art.

In 1951, Raoul Meyer traced the picture to Christoph Bernoulli, a Swiss dealer. In 1953, a court in Basel noted Meyer’s pre-war ownership, but ruled that Bernoulli, who purchased the work, had gained good title. Meyer rejected Bernoulli’s offer to sell him the painting.

The picture resurfaced in New York, at David Findlay Gallery, which sold it in 1957 to Aaron and Clara Weitzenhoffer, collectors from Oklahoma who made their fortune in oil. In 2000, the Weitzenhoffers, who were Jewish, donated the Pissarro and other works to the Fred Jones, Jr. Museum of Art at the University of Oklahoma, which modelled new galleries after rooms in the donors’ home.

Leone Meyer was born in Paris in 1939, a Jewish war orphan whose grandmother and mother were killed in Auschwitz. At the age of seven, she was adopted by Raoul Meyer’s wife, Yvonne Bader. A pediatrician by profession, Leone-Noëlle began searching for her adopted family’s looted art. She eventually found the Pissarro online, and demanded its return from the University of Oklahoma in 2012.

At first, the university rebuffed her request, although it softened its position as the long-running case generated more publicity and pressure. In 2016, the two parties reached an agreement in which ownership would be transferred to Meyer, but the work would alternate display between Oklahoma and France every three years, starting in July 2021. A plaque would also be shown alongside the painting (in Paris and Oklahoma) citing the Meyers’ pre-war ownership and current title, and the Weitzenhoffers’ good faith purchase of the picture. And Meyer would also be expected to donate the work to a French museum during or after her lifetime.

“Mrs Leone Meyer had no other choice but to sign this settlement agreement, in her hope to see the return of the painting in France, at least temporarily,” says her lawyer Ron Soffer, in court papers. He adds in the filings that David Findlay Gallery in New York and the Weitzenhoffers ignored the painting’s provenance in the 1950s and that the University of Oklahoma did not perform its own due diligence in 2000, after the Washington Principals for resolving Nazi-looted art disputes were adopted in the US.

Speaking to The Art Newspaper, Soffer says that the 2016 settlement is “contrary to public policy”, namely a French law which denies good title to the holders of any unreturned Nazi-looted objects, and that the Musee d’Orsay would not accept the painting as a donation because of the three-year exchange requirement. “Mrs Meyer’s position in the French proceedings will be that the 1945 statute, as interpreted by a recent landmark decision of the French Supreme Court, requires, as a matter of public policy, the full restitution of property taken by the Nazis during the occupation of France, and that no one can have a legitimate claim to resist such restitution,” he says. “Once she obtains full and unconditional restitution, without the obligation to send the painting to Oklahoma every three years, Mrs Meyer hopes that her donation of the work to the Musée d’Orsay will be accepted.”

The recent French Supreme Court ruling Soffer cites involved another Nazi-looted Pissarro, La Cueillette des Pois (The Pea Harvest) (1887), in which the lawyer represented an American collector who was seeking repayment for the painting after it was seized while on display in France. Meanwhile Soffer’s wife, Agnes Peresztegi of the Commission for Art Recovery of the World Jewish Congress, facilitated the 2016 settlement between the University of Oklahoma and Leone Meyer, although she says she has no involvement with the Pissarro case today.

Update, 20 November: A US District Judge in Oklahoma has ordered Meyer to cease and desist in her effort to scrap a 2016 legal settlement. Praising the ruling, the University of Oklahoma's president Joseph Harroz, Jr, says in a statement: “The ability to view a painting with such important and deep historical significance presents a tremendous educational opportunity for OU students and museum visitors.” Yet the painting remains in France, where enforcement of the US court ruling will be challenge. A Paris court is still due to hear Meyer's case on 8 December, when it will consider taking the Pissarro into official custody, before it hears arguments for scrapping the settlement on 19 January 2021.

about 9 hours ago
'Good reasons to believe this is a new Caravaggio': specialists cautiously vouch for €1,500 painting pulled from Spanish auction