US Supreme Court sides with Germany in Guelph Treasure case

In a unanimous opinion, it found the country cannot be sued for taking property from its own citizens, making it harder for the heirs of some Holocaust victims to recover art through the US justice system 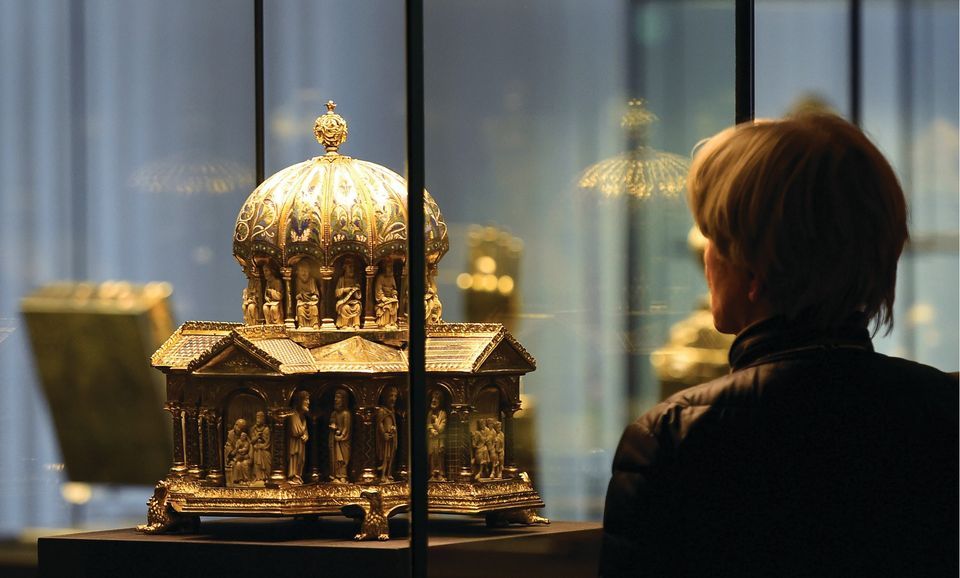 This cupola reliquary is part of the Guelph Treasure, displayed at the Kunstgewerbemuseum (Museum of Applied Arts) in Berlin Photo: AFP Photo/Tobias Schwarz

In a unanimous opinion that could make it harder for the heirs of Jewish victims to reclaim art through the US justice system, the Supreme Court has sided with Germany in the high-profile Guelph Treasure claim, rejecting the argument that the country can be sued in the US for taking art from its own citizens as part of the Holocaust. The disputed collection at the centre of the case, the medieval Guelph Treasure estimated to be worth at least €200m, will remain for now in Berlin at the Kunstgewerbemuseum (Applied Arts Museum) in Berlin, while the case returns to a lower court.

In its opinion written by Chief Justice John Roberts, the court said flatly that the Foreign Sovereign Immunities Act (FSAI), which protects other countries from lawsuits in the US, grants no exception for claims that property was taken from a nation’s own citizens as part of a human rights violation such as the Nazi genocide. This was the argument made by the heirs of the Jewish art dealers who sold the Guelph relics to the Nazi government allegedly under duress in 1935.

The court said no. Based on the historical and legal background of the statute, it found that a rare exception to FSIA that allows suits to be brought for property taken “in violation of international law” only applied to non-citizens, and “does not cover expropriations of property belonging to a country’s own nationals,” Roberts said, quoting the Court’s 2004 opinion in a successful claim by Maria Altmann that she could sue Austria for allegedly taking five paintings by Gustav Klimt from her uncle, who lived in Vienna but was a Czech national. The exception “places repeated emphasis” on property rights, Roberts wrote, “while injuries and acts we might associate with human rights law violations are notably lacking. That would be remarkable if the provision were intended to provide relief for atrocities such as the Holocaust.”

Roberts added that the heirs’ argument would turn the exception “into an all-purpose jurisdictional hook for adjudicating human rights violations”.

The court also noted that the FSIA places explicit, “reticulated boundaries” on when foreign states can be sued in the US for human rights violations, such as torture or terrorism. These precisely drafted exceptions “would be of little consequence if human rights abuses could be packaged as violations of property rights,” Roberts said. He added that the court’s interpretation of the act is meant to avoid “producing friction in our relations with other nations,” and cautioned that the US would be surprised if a court in Germany decided to adjudicate “claims by Americans that they were entitled to hundreds of millions of dollars because of human rights violations” committed by the US government years ago.

The case does not end here, however. Justice Roberts said the court had not considered an alternative argument noted by the heirs: that the 1935 sale was not subject to the “non-citizen” requirement because by that time, the dealers were no longer in fact German nationals, due to the loss of their rights as citizens under the Holocaust. The lower appeals court in Washington, DC, should now direct the federal district court, Roberts said, to consider this argument, including whether the heirs have adequately preserved their right to raise it now.

Nicholas O’Donnell, the heirs’ lawyer, said his clients were “obviously disappointed in the Court’s ruling. We are considering our next steps for when the case returns to the District Court.”

Jonathan Freiman, the lawyer for Germany and the Prussian Cultural Heritage Foundation (SPK), which now administers the collection, told The Art Newspaper that he and his clients were “pleased with the Supreme Court’s clear and unanimous reading” of the FSIA. “Any claim over the Welfenschatz [Guelph Treasure] does not belong in a US court.” Hermann Parzinger, the president of the SPK, said the foundation welcomed the decision, and looked forward “to presenting robust legal arguments for the dismissal of this lawsuit.”