The exact spot where Vincent van Gogh was painting just a few hours before he shot himself has been found. The picture, Tree Roots, was identified as his last work a few years ago. Now an early postcard has made it possible to pinpoint the location.

This morning Willem van Gogh, the great-grandson of the artist’s brother Theo, and Amsterdam's Van Gogh Museum director Emilie Gordenker will formally unveil a plaque in Auvers-sur-Oise, the village north of Paris where the artist died on 29 July 1890.

Their presence demonstrates that both the family and the museum believe it to be highly plausible that the site of the last painting has finally been found. This discovery could throw fresh light on Van Gogh’s tragic death.

The detective work began in 2012 when the museum’s senior researcher Louis van Tilborgh and vegetation specialist Bert Maes identified Tree Rootts as Van Gogh’s last painting. The most important evidence came from an obscure and unsigned article by Andries Bonger, Theo’s brother-in-law. In 1893, Bonger wrote that “the morning before his death he had painted an underwood, full of sun and life”. The suggestion that Tree Roots was the last picture overturned the long-established belief that the symbolically charged Wheatfield with Crows was the final work.

The latest twist to the story is the location of the remains of the actual trees. The discovery was made by Wouter van der Veen, the scientific director of the Institut van Gogh, an organisation that is linked to the Maison Van Gogh—the former Auberge Ravoux in Auvers, where the artist died on 29 July 1890.

Four months ago Van der Veen was looking through old postcards of Auvers when he spotted one depicting a cyclist in a road, with a steep slope of trees at the back. He suddenly realised that part of the scene was uncannily similar to that in Tree Roots, the painting at Amsterdam’s Van Gogh Museum. After comparing the 1890 painting and the 1900-10 postcard he became increasingly convinced that they depict the same row of trees. 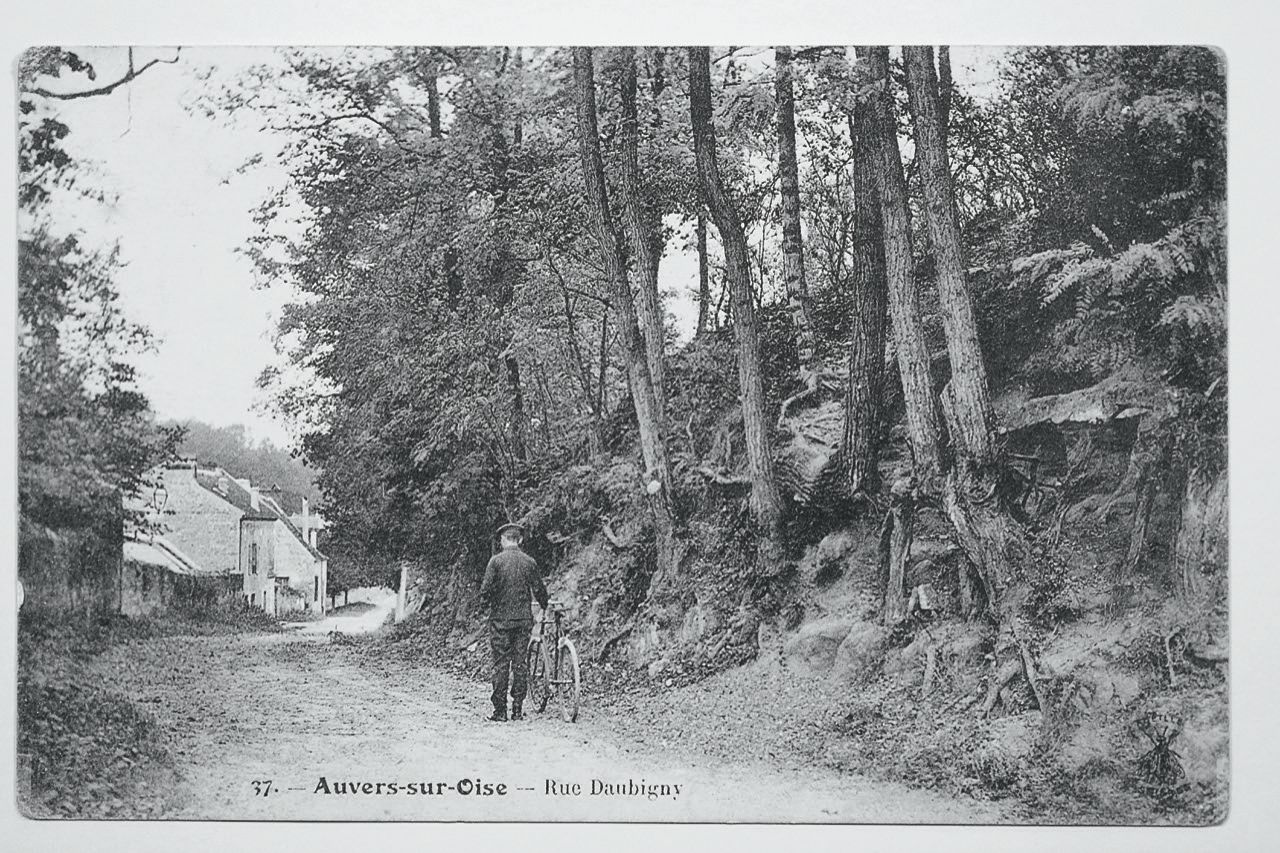 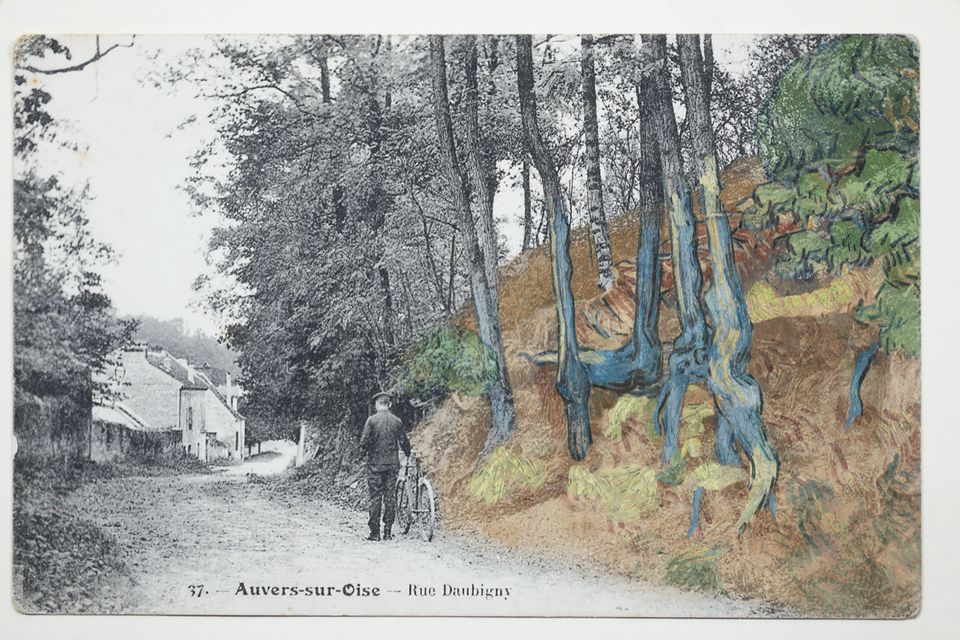 With coronavirus restrictions on travelling, Van der Veen had to wait until May, when he was able to drive to Auvers. The postcard is entitled Rue Daubigny, and on reaching the road he was quickly able to identify the spot, just outside number 48. Astonishingly, the largest tree stump in the painting and postcard is still there.

The location is only 150m from Van Gogh’s inn, just two minutes’ walk away. Although generations of Van Gogh specialists and aficionados have passed there, no one had spotted the link. When Van der Veen visited on 15 May the remains of the trees and roots were mainly covered in fresh vegetation. The slope was then partially cleared, revealing the stark outline of the main root and stump depicted in the painting.

A protective barrier has now been erected to prevent damage and allow the sight to be enjoyed by tourists in Auvers, who flock to visit the Auberge Ravoux (which will reopen next March after the coronavirus closure) and the twin graves of Vincent and Theo. 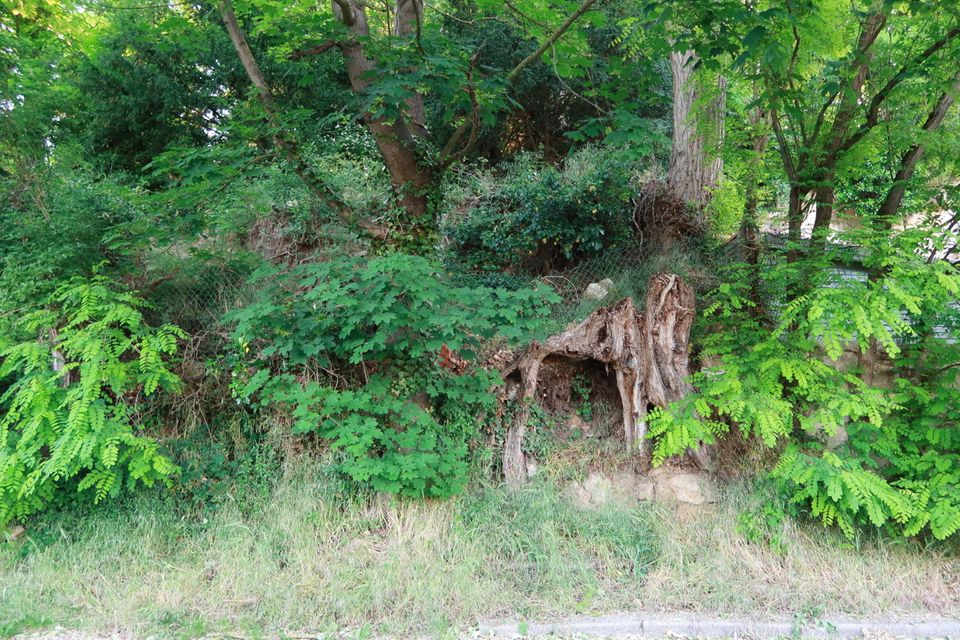 A photograph of the site, as originally discovered, on 15 May 2020 Courtesy of @arthénon 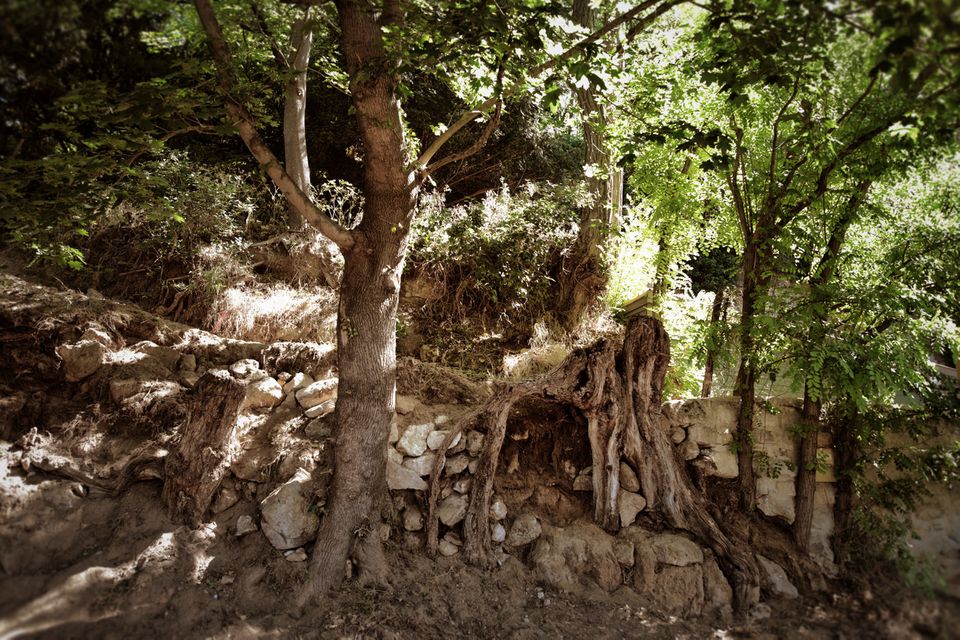 A photograph of the site, after removal of recent vegetation but before the erection of a protective barrier, on 30 May 2020 Courtesy of @arthénon

Van der Veen has investigated what happened on 27 July 1890, the day Vincent died. Citing Bonger, he believes that Van Gogh began his painting that morning, at this location conveniently close to his inn. Although it is a large picture (one metre wide) the artist normally worked very quickly and would probably have almost finished it that morning.

Van Gogh returned to the inn for his Sunday lunch. Van der Veen believes that the artist then went back to Rue Daubigny, adding some refinements to the painting and depicting the light effects of the late afternoon. He took the almost-completed work back to the inn.

Although this remains speculative, on his return to his garret bedroom he may have made the fatal decision. That evening, carrying a small revolver, he left the inn and walked up to the wheatfields on the edge of the village. It was not murder, as some recent writers have claimed, but suicide. Van Gogh died two days later of his wound.

As Van der Veen explains: “Having worked for hours on a painting which shows a preoccupation with the relentless struggle between life and death, Van Gogh, feeling alone and seeing no alternative, decided to find his earthly rest with the setting sun, on the outskirts of the village with a view of a freshly harvested wheatfield.” As for Tree Roots, Van der Veen regards it as “a painted farewell note”.

Van der Veen’s finding provides the centrepiece of his new book, Attacked at the Very Root: an Investigation into Van Gogh’s Last Days. This is available for free download.