Locals cite concerns about property values, obstructed views of nature and the ethnicity of the artist, but Vancouver Biennial organisers say the work will act as a warning beacon for ocean conservation Residents of a Vancouver neighbourhood have organised a community petition asking the city to stop the installation of proposed sculpture for the Vancouver Biennale by the respected Chinese artist Chen Wenling, citing concerns about the work’s impact on real estate values and the ethnicity of the artist as factors. As of Monday (14 June), the deadline for submission of public input, the petition had 1,300 signatures. A final decision by the city is expected later this week.

The proposed sculpture is an environmentally themed work called Boy Holding a Shark, which is part of the Unesco-backed We Are Ocean programme. The artist Wenling, who won the 1999 Golden Lion award at the Venice Biennale, is known for his provocative, surreal and often grotesque works that have been exhibited in Denmark, Switzerland, Australia and South Korea. But locals in Vancouver who signed the petition have called his shark sculpture a “monstrosity” that “blocks views” and will adversely affect “property values”, while others questioned “why we have three public art installations by two well-known artists based in Bejing, China… what about Canadian artists?”

Vancouver has a history of opposition to and heated debate about public art. A decade ago, when the Vancouver Biennale presented Dennis Oppenheim’s Device to Root Out Evil—a 25-foot, upside-down, New England-style church with its steeple thrust into the ground—the Vancouver Parks Board was flooded with complaints voicing offended Christian sensibilities, and it was eventually—and rather ironically—driven out of town by “concerned” residents who complained it blocked their views.

Many petitioners opposing the Wenling installation cite an “intrusion” on “natural beauty”, in a city where picturesque views of the ocean and mountains can be the enemy of compelling culture. But the biennial organiser say the work has been misunderstood and is “akin to a lighthouse and acts as a warning that human activity is jeopardizing our oceans to the point where even the most powerful and seemingly indomitable of marine life are in distress,” according to a statement. “The young distraught boy, holding the shark as evidence for all to see, reminds us that the future is in our hands.” 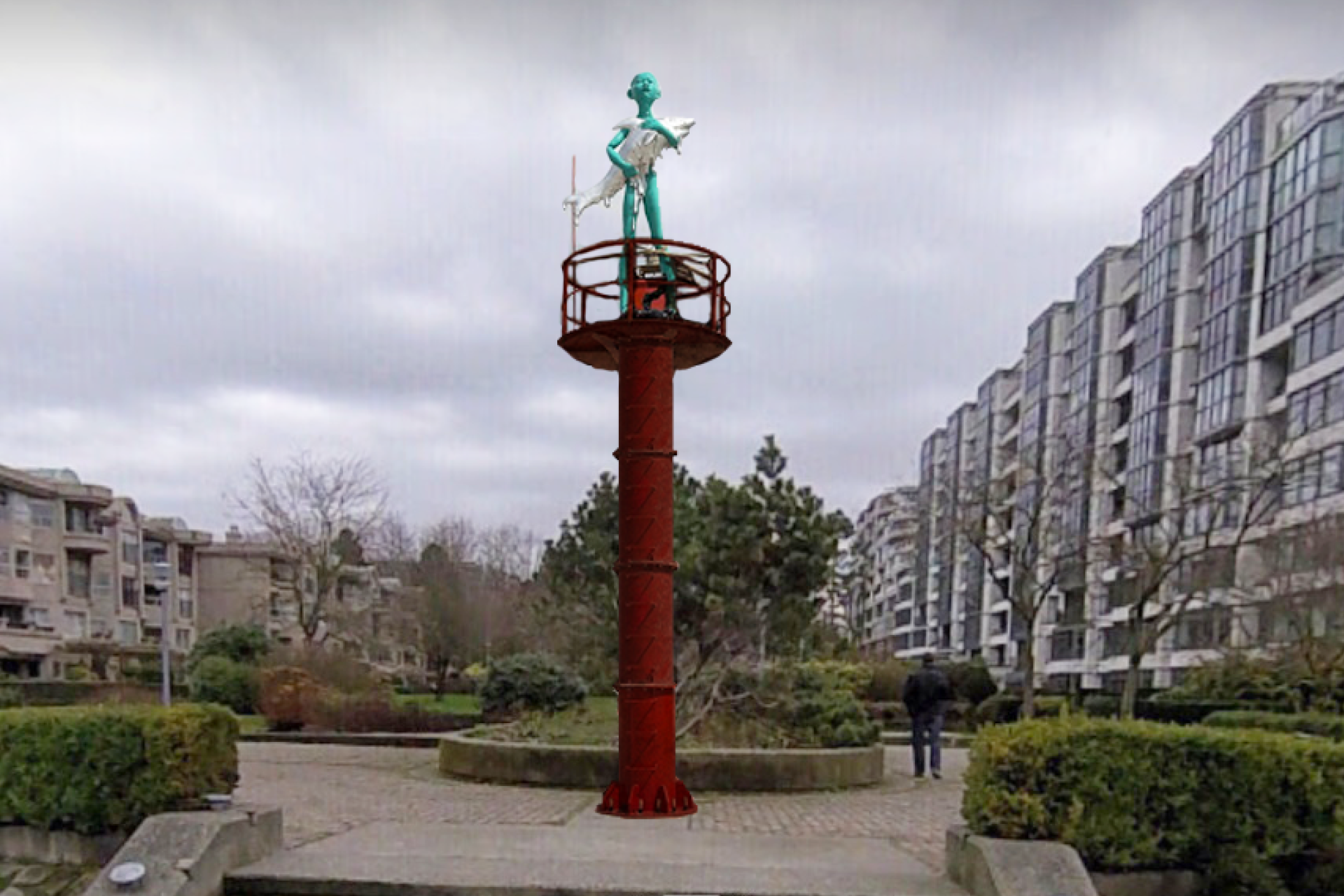 The Vancouver Biennale is of course not unique in receiving public opposition to public art. Capture Photography’s exhibition of Steven Shearer’s disturbing “found” images of people sleeping were removed in March from the billboards they were displayed on by their sponsor Pattison Outdoor Advertising, after only three days, due to complaints by local residents. And in a city where unaffordable real estate dominates the social discussion, even the Vancouver-based, internationally celebrated artist Rodney Graham’s Spinning Chandelier, installed by local developer Westbank in 2020 as part of a public art programme near Vancouver House, was the target of ire by outraged citizens speaking of “class warfare”.

Happily, the silver lining in all of the public debate about public art is an increased awareness of its important role in civic life, and the Vancouver Biennale founder Barrie Mowatt says it has resulted in “the most support for a project” he has ever seen.