The German-born Canadian captured a view of the city that has since been lost, but he did not receive major recognition until late in life 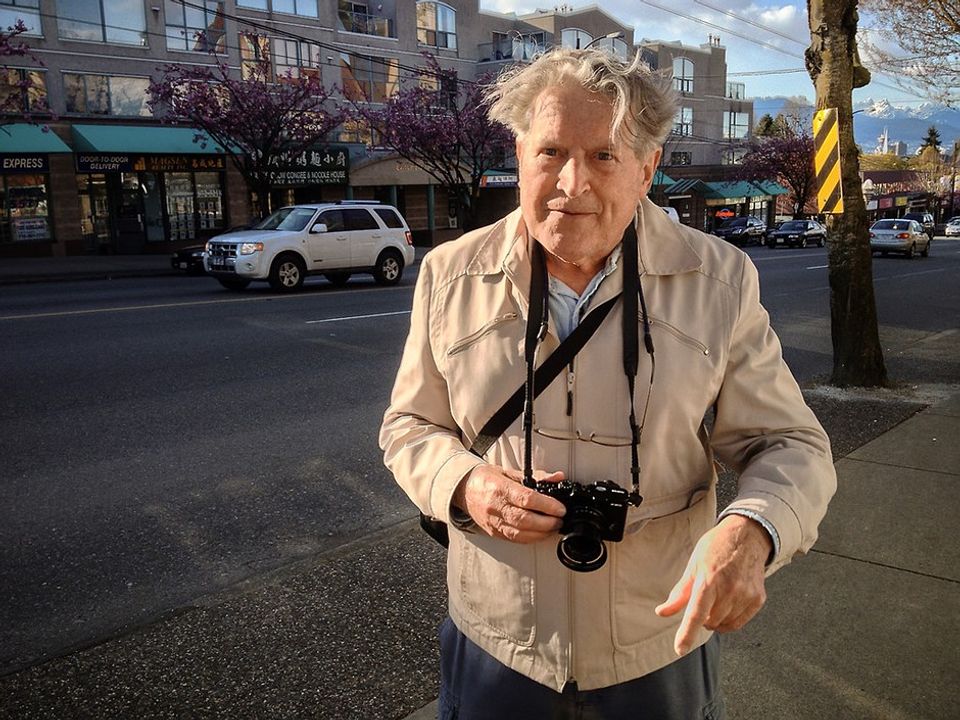 The passing of the Vancouver-based photographer Fred Herzog on Monday, at age 88, marked not only the loss of a great artist, but also the end of an era, since the city he documented over more than half a century has itself vanished. The Kodachrome images of mid-century street life he became famous for late in his career show Vancouver before it became overrun by luxury apartment towers and international real estate speculation. Herzog’s scenes of downtown and its rich neon streetscapes convey a sense of excitement and optimism that has given way to a certain urban malaise, as architectural heritage and cultural life are threatened by development and unaffordability. 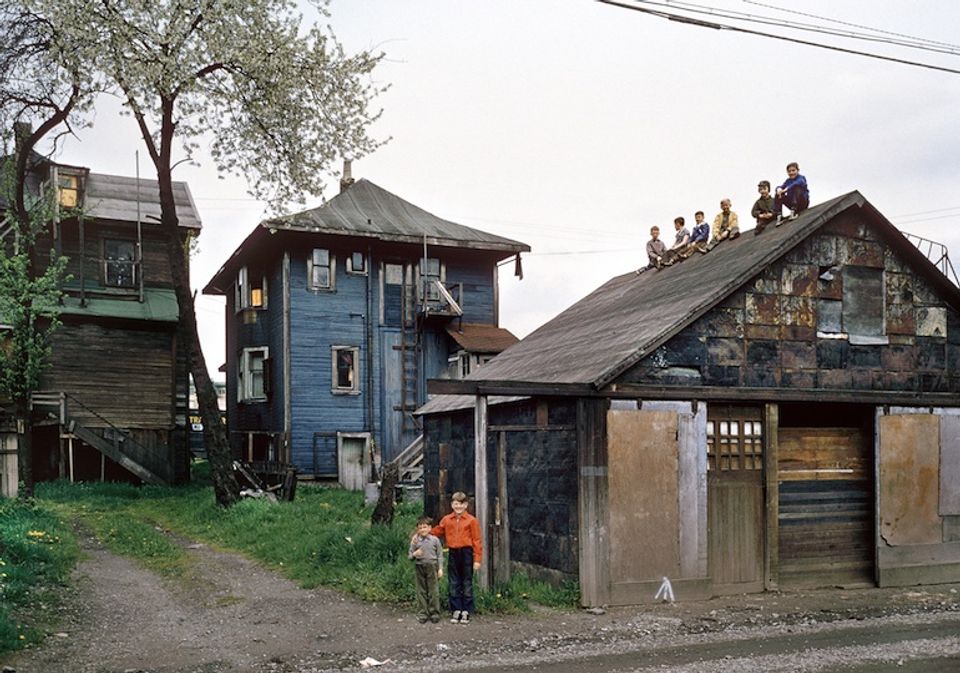 Even the building that houses the Equinox Gallery that represents the photographer is under threat, from a proposed new subway line. But Herzog’s striking images live on. In Black Man Pender (1958), a man and his daughter walk proudly through Chinatown—a decade before a new viaduct would destroy Hogan’s Alley, the center of the city’s black community where the rock guitarist Jimi Hendrix once lived with his grandmother. Man With Bandage (1968) captures a social sea change as a wounded white man in a t-shirt tries to hail a bus in what is now the city’s troubled downtown eastside, while a prim matron with hat and gloves looks on disapprovingly. And the photo Boys on Shed (1962), one of his few posed photographs, shows six youngsters sitting on the roof of a garage at the edge of a large lot with an old wooden house—the kind of locations that have become civic anachronisms.

An early kind of urban flaneur, Herzog, who emigrated to Vancouver from Germany in 1953, would roam the streets of his adopted city capturing ephemeral moments on colour film, at a time when “serious photography” was confined to the realm of black and white. When printing technology finally allowed Herzog to recreate the texture and depth of his Kodachrome colour slides, he was already in his 70s. It was not until he had his first solo show at the Vancouver Art Gallery in 2007, at age 76, that Herzog received widespread recognition. 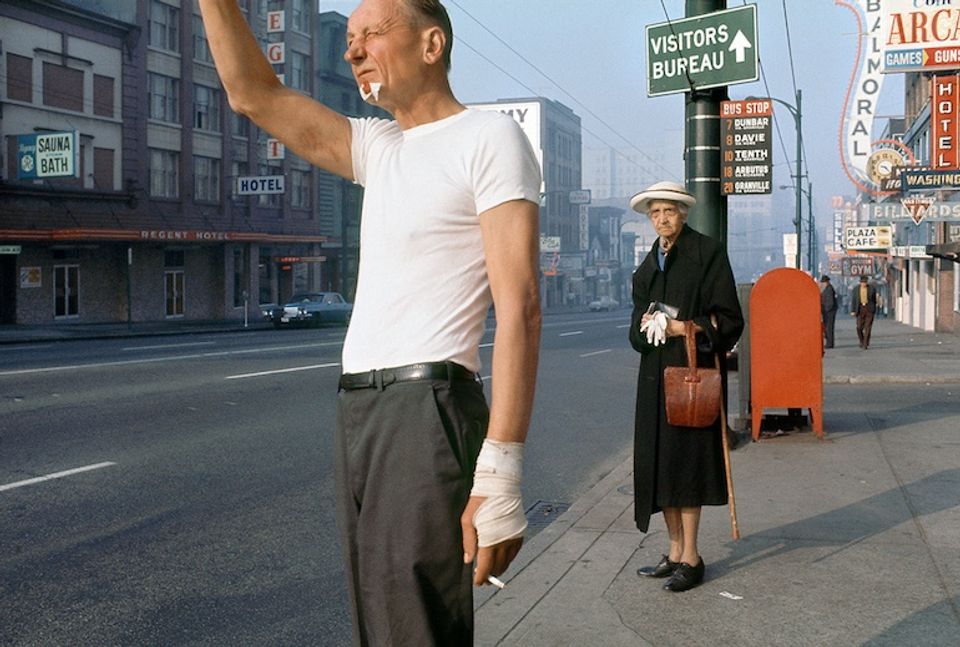 “Prior to 2007, Fred was a bit of a mythical figure in the Vancouver art world,” notes Grant Arnold, the curator of British Columbian art at the Vancouver Art Gallery. “People knew of him but, as he hadn’t made many prints prior to this time, his images weren’t well known. The exhibition changed that and he quickly attained a status that approached that of a rock star.”

Herzog, who continued to work well into his 80s until declining health started to limit his urban wanderings, was recently discovered by a new generation enamoured of his nostalgic images.

“He had an uncanny ability to deploy gesture as a condensation of a psychological state,” says Arnold, “ and to represent the city as a site of interaction and exchange in which the individual is positioned within a larger set of—sometimes oppressive—social mechanisms.” 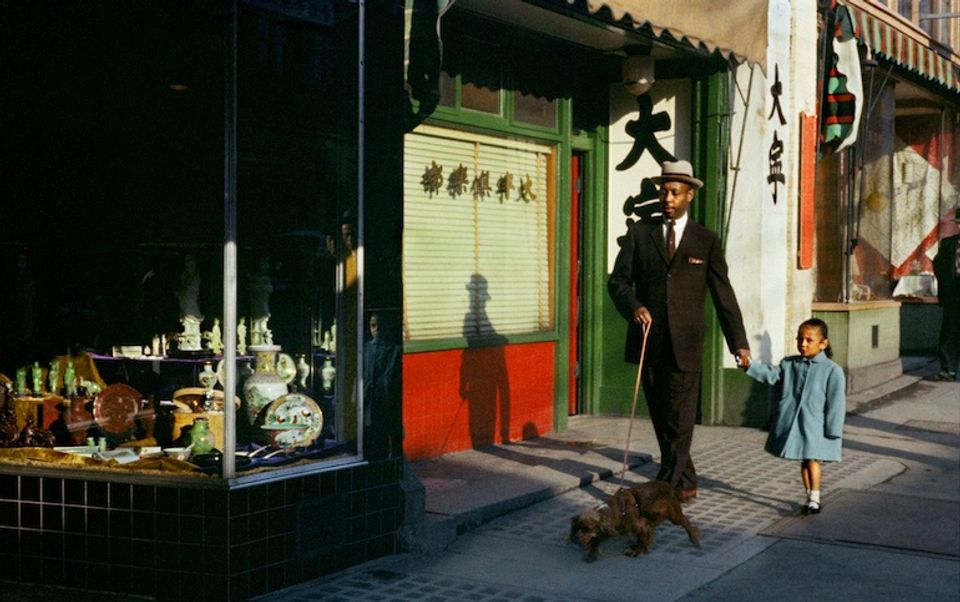 Andy Sylvester, the director of Equinox Gallery who will show Herzog’s work at Paris Photo in November, says that, “his considerable body of work has broadened the international conversation on early colour street photography, and changed the view of what is important colour work from the 1950s forward.”

His major exhibitions include Eyes Wide Open! 100 Years of Leica Photography (2015) at the Haus der Photographie, Hamburg, Germany and Photography in Canada, 1960-2000 (2017), at the National Gallery of Canada, Ottawa. In 2010, Herzog received an honourary doctorate from Emily Carr University of Art + Design in Vancouver, and in 2014 he received the Audain Award for Lifetime Achievement in the Visual Arts.

He is survived by his daughter Ariane and son Tyson; his wife Christel died in 2013.