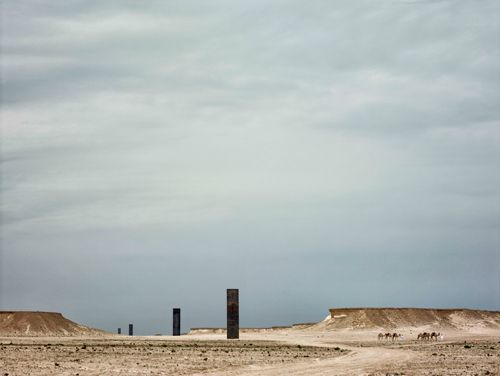 One of Richard Serra’s largest public works, set in the Qatari desert, has been defaced once again. Qatar Museums, the government authority responsible for most state museums and public works in the country, announced on social media that “a new incident of vandalism” to the East West/West East (2014) sculpture on 28 December. The work, which was commissioned by the Qatari royal family, is made up of four 14m-high steel plates spread over 1km in the remote location of the Brouq nature reserve. “The vandals were apprehended by authorities and were referred to public prosecution for the necessary legal action to be taken against them,” the announcement states.

This is not the first time that the monument has been vandalised by visitors. In March last year, Qatar Museums reported that the steel plates had been “severely and deliberately damaged” and in November it announced the start of a cleaning process to be carried out by restoration experts.

The damage includes graffiti and scratches on the metal surface. Serra’s work, which is difficult to reach due to the remoteness of its location and the harshness of the desert climate, has in fact long been a site marred by graffiti. In an article about tourism in Qatar by CNN in 2018, the writer notes the amount of vandalism stating that “some of the graffiti merely declares ‘I was here,’ but others are outlets for artistic debate or national pride—with some of the more recent homegrown Qatari additions voicing defiance in the face of regional sanctions.” The sanctions, which began in 2017, saw four neighbouring countries cut ties with Qatar but the blockade finally ended on Tuesday.

Qatar Museums and Gagosian Gallery, which represents Serra, were not immediately available for comment at the time of publishing.

Qatar Museums launched a campaign in September last year to encourage the protection of public works, the acting director of the public art department at Qatar Museums, Abdulrahman Al Ishaq, told Al Sharq news. The project includes new signage around the site in the nearby village of Zekreet, reminding visitors about the laws against vandalism. In December, Al Ishaq also told Gulf News that surveillance measures may be put into place to protect the work and help identify the perpetrators.

Al Ishaq stressed the importance of educating citizens about the public works that he says are “a national asset”, adding that Qatar Museums is planning debates on the subject as well as developing learning materials about the works, to be released soon. “Although these artworks are not confined to a closed space, the community must understand that public art is an extension of a vast collection built by Qatar Museums and it is in part their responsibility to embrace and take ownership of these artworks,” Al Ishaq says.

Serra is well known for his giant steel works which have been commissioned for public spaces in countries all over the world, including prominent sites in London, Amsterdam and Basel, where they are also often graffiti targets.