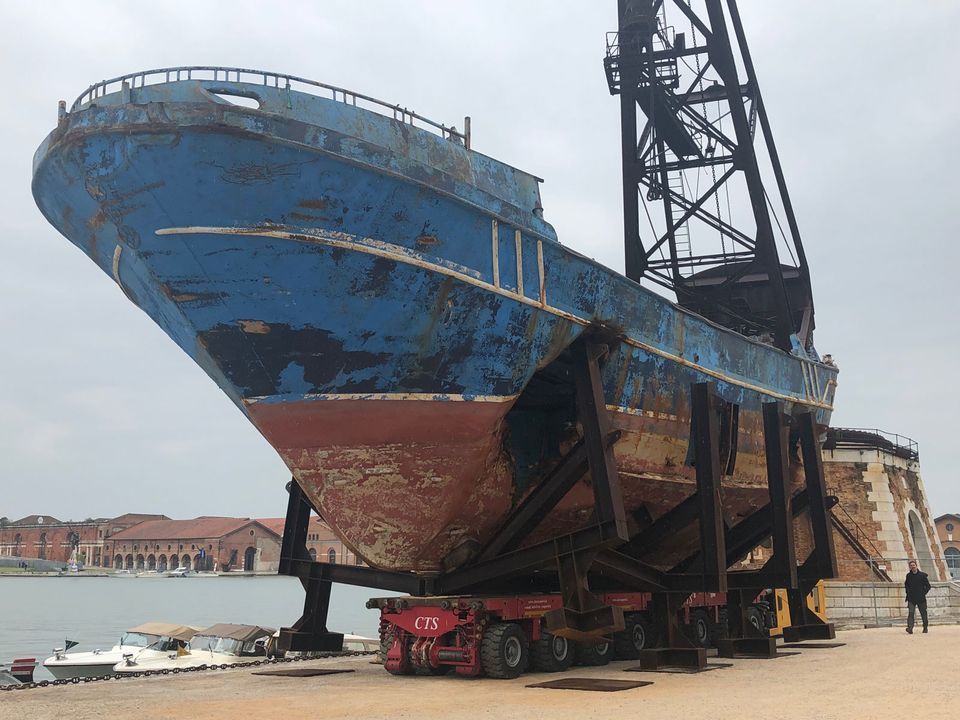 Artist Christoph Büchel displayed a wrecked ship in which hundreds of migrants had died at the 2019 Venice Biennale, titled Barca Nostra © The Art Newspaper

It was the most controversial display of the 2019 Venice Biennale—a giant, rusting fishing boat which sank in the Mediterranean on 18 April 2015 with an estimated 800 to 1,100 migrants from Libya on board. Hundreds locked below deck drowned. Only 28 survived.

The vessel was recovered from the bottom of the sea by the Italian Navy in June 2016 and later transported from Sicily to Venice by the Swiss artist Christoph Büchel. Titled Barca Nostra, the wreck was intended to raise awareness of the migrant crisis and then return to the Sicilian town of Augusta for long-term display in a memorial garden.

But today Barca Nostra remains in the Arsenale, Venice’s historic shipyard and one of the Biennale’s main venues, even though the exhibition closed more than a year ago.

“Starting in November 2019, we have repeatedly asked Christoph Büchel and his gallery Hauser & Wirth, to respect the commitment the artist made to return [the boat] to its owner, the municipality of Augusta in Sicily, which loaned it to Büchel,” the Venice Biennale said in a statement.

In 2019, the town council of Augusta agreed to let Büchel borrow the vessel for one year for display in Venice. The two parties signed a contract which “stipulated that all the costs of transporting the boat to Venice and then returning it to Sicily were to be met by the artist”, a Biennale spokeswoman added.

The mayor of Augusta, Giuseppe Di Mare, confirmed the terms of the contract in an email to The Art Newspaper. “Unfortunately the Biennale and our municipality are involved in a dispute with Büchel for the return of the boat to Augusta. We are in constant contact with the director of the Biennale to resolve this matter without resorting to further action,” Di Mare wrote. He declined to say whether the municipality still plans to display the boat in a garden of remembrance for migrant lives lost at sea.

Christoph Büchel declined to comment. A spokeswoman for his gallery, Hauser & Wirth, says it is not involved in the Barca Nostra project.

According to reports in the Italian press, the artist is currently involved in a separate legal dispute with the firm he engaged to transport the migrant boat from Sicily to Venice. The vessel’s supporting metal cradle was badly damaged when the boat arrived in Marghera, Venice’s industrial port, and Büchel is seeking to recover money for this from the shippers. He also hoped to recoup costs from the Biennale’s insurance policy but was not successful.

Sources close to the Barca Nostra project say that the damage sustained by the cradle in transit has prevented the artist from moving the wreck. Nevertheless, he intends to return the boat to Sicily once the dispute with the shipping company is resolved.

“Barca Nostra was one of the Special Projects of the 2019 Biennale; for all of these projects the artists themselves are responsible for the transport to Venice, installation of works and the return of the work once the exhibition ends. The boat’s cradle was damaged while it was being shipped here by the firm chosen by the artist and for which he is responsible,” a Biennale spokeswoman said.

“Once again, we are asking the artist to respect the commitment he made and to return the work to Augusta,” she added. The Biennale said that it had not initiated legal action against Büchel, as some Italian press reports have claimed, but did not rule out doing so.

In a statement to The Art Newspaper, the curator of the 2019 Venice Biennale, Ralph Rugoff, said: “The Venice Biennale has only limited funds available for shipping works of art and its budget was never designed to accommodate the kind of costs associated with transporting something like Barca Nostra. Presenting the wrecked ship at the Biennale would never have been permitted had not Christoph Büchel agreed to be responsible for the costs of returning it after the exhibition. Christoph spoke often of his desire to bring the boat to Brussels as a way of calling attention to the EU’s role in the immigration crisis, and I certainly hope he finds a way to do this but in the meantime he and his supporters should fulfil his agreement to return the boat to its legal home.”

When Büchel put the wreck on show at the Venice Biennale, it divided the critics. This newspaper objected to the artist’s decision not to provide any explanatory labels about the boat and the hundreds of migrants who died in it. Instead, this information was included in the exhibition catalogue which is only purchased by a minority of visitors.

In September 2019, following the collapse of the ruling Italian coalition and the removal of Salvini’s party from government, culture minister Dario Franceschini recorded a social-media video in front of the rusting migrant boat in Venice. “It’s appropriate for me to stand here, in front of this symbol of the tragedies which occur in the Mediterranean, to say that after months of hate, our country needs to rediscover the values which have made us great: solidarity and humanity,” Franceschini said.