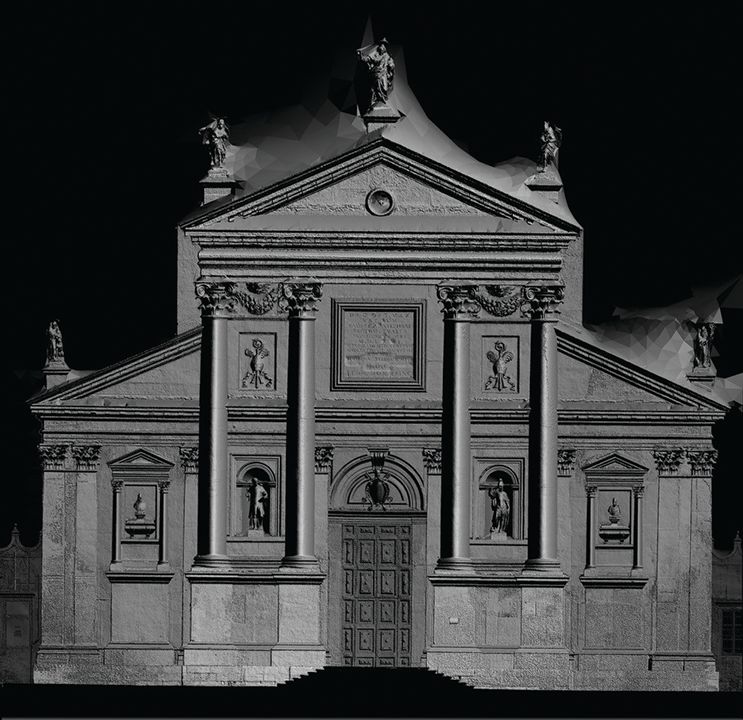 Look out over the water from the Doge’s Palace in Venice and you see the island of San Giorgio, home to the Fondazione Giorgio Cini, with its archives, rare books, music and high-level international conferences. It has nearly completed a project that is breathtaking in its ambition and implications.

This summer, Adam Lowe and his team from the Factum Foundation, with ARCHiVE, the École Polytechnique Fédérale de Lausanne and Iconem, have made a digital record of all its buildings, inside and out, in such high resolution that San Giorgio now exists in a terabyte of data, a kind of a digital avatar. They have used a LiDAR (light-detection and ranging) scanner, which sends out a pulsed laser light towards the target object and measures the time it takes the laser to return. It calculates the distance the light has travelled, and plots that point in a digital 3D space.

The LiDAR has recorded inscriptions so high up they cannot be read from the ground. And when Factum will have recorded the roofs using a drone, the grounds and the all-important relationship between the surface of the island and the rising and falling levels of the water, there will be a perfectly accurate record of the whole.

But what is it for? The answer is that it will allow the encroachments of the water and the consequent damage to the island and buildings to be monitored precisely as the water level rises in the Adriatic and the lagoon. And this is a certainty, according to the highly authoritative IPCC (Intergovernmental Panel on Climate Change), although the levels it predicts vary according to various environmental scenarios.

The IPCC’s 2019 report is bleak: “Sea level will continue to rise for centuries. It could reach around 30-60cm by 2100, even if greenhouse gas emissions are sharply reduced and global warming is limited to well below 2°C [most experts now believe we shall not manage this], but around 60-110cm if greenhouse gas emissions continue to increase strongly”. At 110cm, Venice will be under water at every high tide, and serious damage to its buildings will start at a much lower level.

Adam Lowe dreams of scanning the whole of Venice so that it will exist forever—at least in combinations of 0 and 1.

Incredibly, the Italian government has no plan to deal with this, perhaps because of a widespread misunderstanding of the role of the mobile barriers between the sea and the lagoon, raised successfully for the first time on 10 July and due to be completed in 2021. From the first, these have been designed to deal with short-term flooding events but are not the solution to the long-term problem of sea-level rise because, as things stand at present, the lagoon can only be cut off from the sea for short periods of time; any more than a few hours a month and the lagoon would become unsustainably polluted.

When Lord Byron wrote, “O Venice, Venice! when thy marble walls are level with the waters, there shall be a cry of nations o’er thy sunken halls, a loud lament along the sweeping sea”, he was indulging in romantic melancholy, not imagining that it might really come to pass. Now, when it actually happens, the Fondazione Cini will own a digital record with which the island and its buildings could, in theory, be recreated elsewhere, however improbable this may seem at present.

Adam Lowe dreams of scanning the whole of Venice so that it will exist forever—at least in combinations of 0 and 1.

This image of Palladio’s church is a shaded render, meaning that the depth-map (which would otherwise appear as a grey square) has been translated into a rendered image of the data. It took around 30 minutes to record the church’s façade with the LiDAR scanner and around three hours to record it with photogrammetry. The processing and merging of the photogrammetry took several days. The LiDAR was used primarily for scale and geometry, while the photogrammetry was used to fill in the details. The polygonated areas on the roof lack information that will be filled in by drone-based photogrammetry at a later date. The depth-map, where the depth value is encoded into each pixel on a 2D image, was generated to have one pixel per 400 microns (1/40th of a millimetre).