The cost of Venice's worst floods since 1966 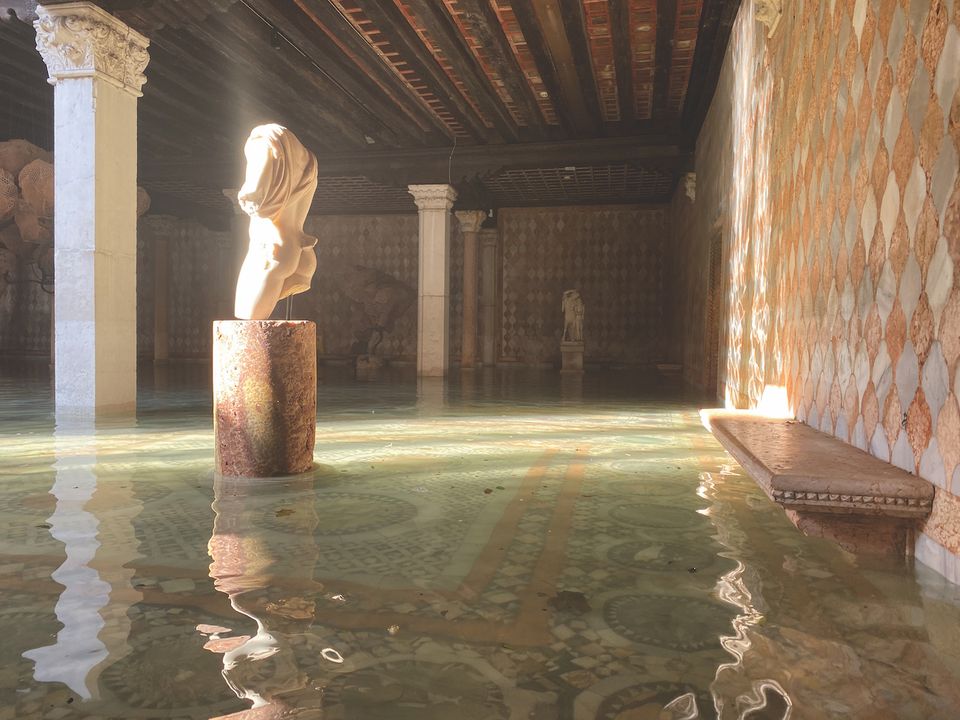 The worst floods to hit Venice in 50 years have caused €360m worth of damage to public property, say representatives of the mayor Luigi Brugnaro. The estimate is based on an initial survey of repairs needed for jetties, paved areas, street lighting and buildings owned or managed by the municipality, including the civic museums. The Italian government declared a state of emergency for the city on 15 November, three days after the high tide reached 187cm above mean sea level, approving €20m in urgent recovery funds that will barely dent this bill. Individuals and businesses had submitted around 7,200 compensation claims to the city administration for a total of €93m by the end of January.

Though the spectacular images of a flooded St Mark’s Square and basilica drew political pledges of solidarity from the capital, Venice’s citizens fear that the exceptional may soon become normalised. There is anger, too, that the lagoon’s long-awaited Mose mobile flood barriers are still not ready despite costing nearly €6bn to date. Dogged by delays and corruption scandals, the project was initially scheduled for completion in 2011.

The city’s wealth of cultural heritage is another victim of the disaster. Three months on, the full extent of the damage is still unclear, but architectural and archival treasures have undoubtedly borne the brunt. Here, we look at some of the key sites affected and the funding commitments made to date by the authorities and private non-profit organisations—most of which were established in the wake of the great flood of 1966.

Located in the lowest-lying part of Venice, St Mark’s was the building worst affected by the floods. The system of valves recently installed in the narthex (foyer) failed because it only protects against water up to 88cm above mean sea level. The architect in charge of the basilica, Mario Piana, announced a €3m repair plan in December, including work on the marble cladding and floors in the narthex and Zen chapel as well as the floor mosaics depicting two peacocks in the right nave. New water pumps will be installed at the back of the church by the end of 2020 to protect the crypt, the adjoining courtyards and part of the sacristy.

The basilica’s governing body, the Procuratoria, already spends around half of its €10m annual ticketing revenues on restoration. But its president, Carlo Alberto Tesserin, says: “If the building had received the same level of attention in the past as it does now, we would not be in this situation. This was a tragedy waiting to happen.”

The regional government has promised €1m in emergency funding, while the Italian culture minister, Dario Franceschini, has given a “double assurance”, Tesserin says, by covering €2m in expenses sustained after the less severe flood of October 2018 and by extending the “Art Bonus” 65% tax deduction to donors who support churches (in addition to museums, libraries, monuments, theatres and operas). 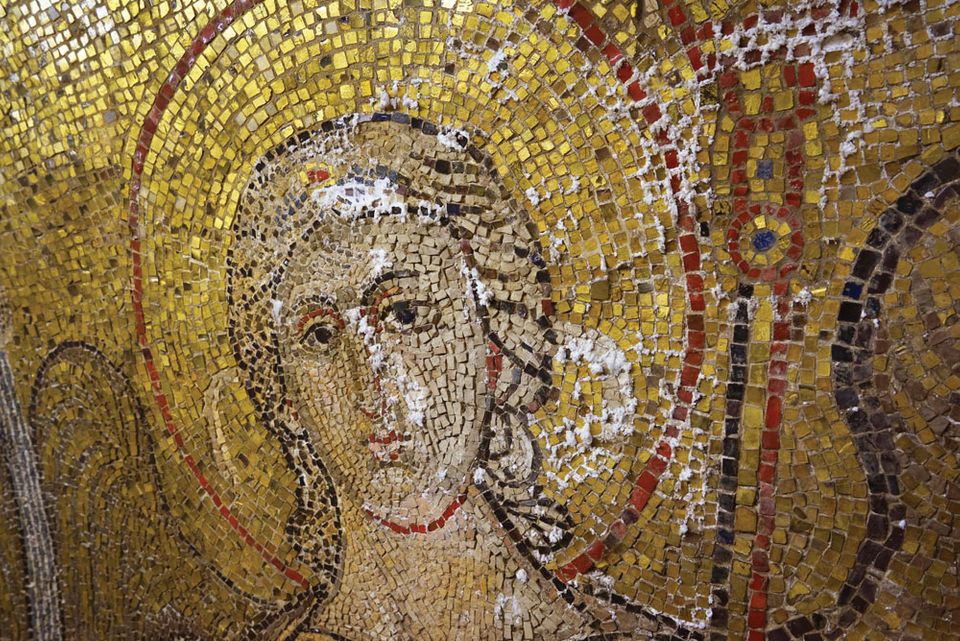 A mosaic of the archangel Gabriel in St Mark's basilica damaged by mineral salts in the flood waters Photo: Procuratoria di San Marco

Don Gianmatteo Caputo, the director of Venice’s office for ecclesiastical cultural heritage, has approved 85 applications to restore liturgical activities in churches around the city. The flood damage has been “significant and extensive”, Caputo says. “All the canal-side churches saw water depths of almost two metres.”

Some were flooded for “more than 72 hours consecutively”, he adds, causing water to erode the underlying subsoil at churches including San Geremia, San Fantin, San Moisè and Sant’Agnese, and the ancient basilica on Torcello island—the oldest structure in the Venetian lagoon, dating back to the seventh century.

“Simply to reopen the churches for worship we have estimated costs of around €1.5m that will be covered in part by a contribution promised by the culture ministry,” Caputo says. “However, this figure should be at least tripled in order to tackle some of the problems that have emerged.”

Fortunately, there was no serious damage to art works inside the churches, except the crucifix of San Moisè, which was toppled by the force of the water despite its heavy wooden base. 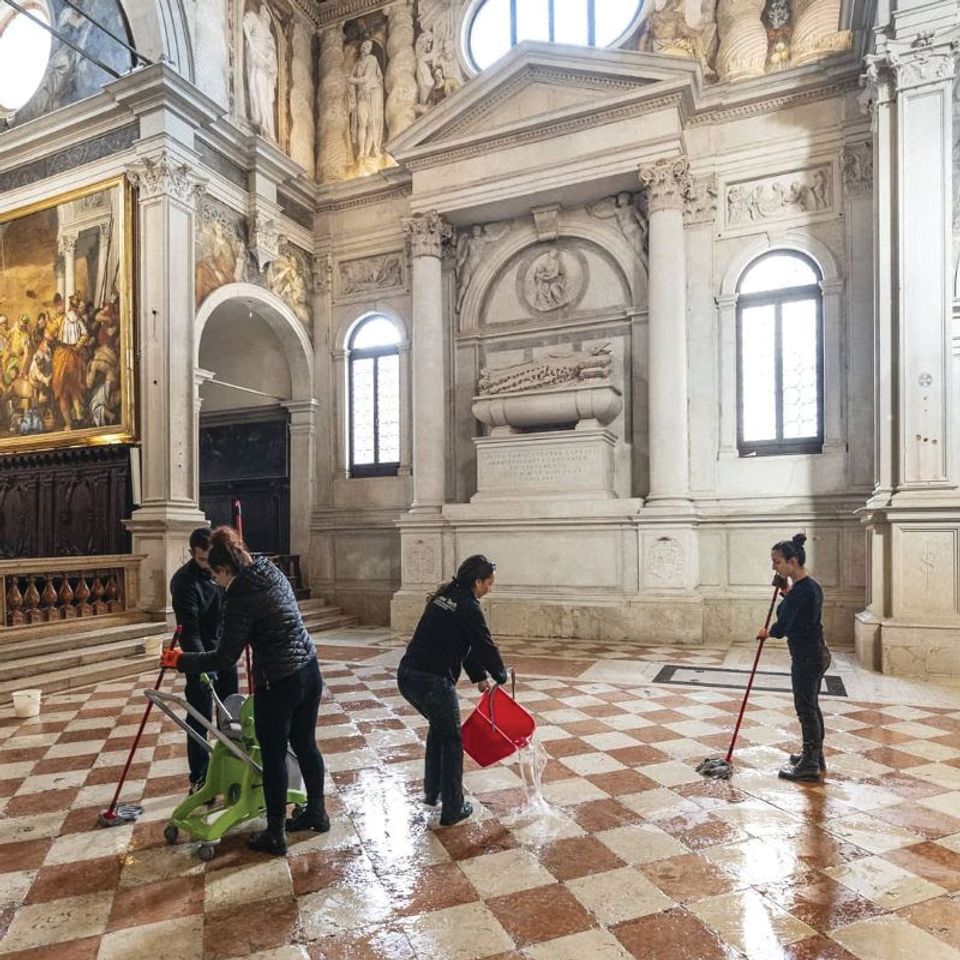 Workers wash the floor of the church of San Sebastiano Photo: courtesy of Save Venice

The library and archives of the Venetian conservatory were flooded during the tidal surge, damaging manuscripts from the late 18th and early 19th centuries containing music by Domenico Cimarosa, Luigi Boccherini and Antonio Caldara, and a 1705 edition of Vivaldi’s trio sonatas.

In consultation with experts from the Marciana Library and the government authority for archival heritage, students and volunteers dried the manuscripts with blotting paper. Around 3,000 documents were sent to the specialist firm Frati & Livi in Bologna, where they were freeze-dried. A number of these will now undergo restoration at the National Central Library in Florence. The treatment is estimated to cost €190,000 in total. The costs of repairing the conservatory shelving and sanitising the premises are still unknown.

At the Ca’ d’Oro, a 15th-century palace museum on the Grand Canal, the water level reached the top of the wellhead in the inner courtyard, flooding the portico’s mosaic flooring, and the storerooms. “We benefited from a small emergency fund from the [culture] ministry which allowed us to reopen the ticket office and repair the electrical installations,” says the gallery’s director, Claudia Cremonini.

Support from the US non-profit Save Venice made it possible to carry out the most urgent tasks, such as washing the floor mosaics, marble wall panels and statue bases with demineralised water, replastering and protecting cracks and replacing stone masonry. The next phase will see repairs to the wellhead and the external portico.

“We are finalising a detailed report on the damage and a programme of restoration,” Cremonini says. The problem is the lack of staff: the Ca’ d’Oro has no in-house conservators for architecture or paintings. 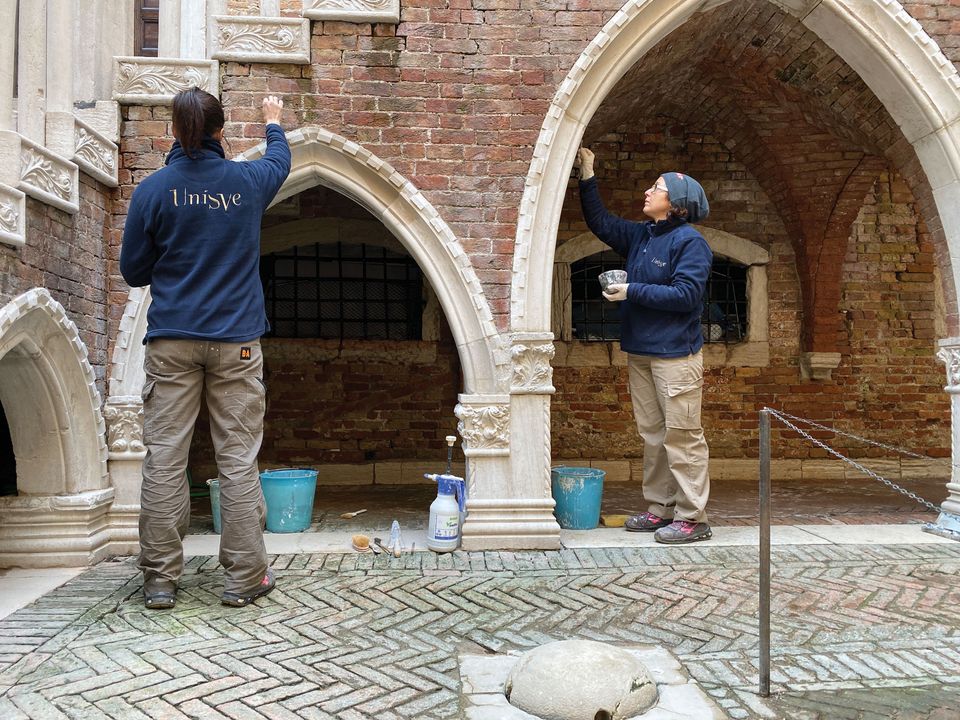 Restoring the stonework in the internal courtyard of the Ca' d'Oro Photo: courtesy of Unisve

In terms of funding, “we now need to draw a line between the emergency response and subsequent restoration projects,” says Manuela Carpani, the head of the local authority for archaeology, fine art and landscape. The culture ministry provided €190,000 in crisis funds to clear debris, reopen offices, replace computers, electrical heating elements and lifts, and repair fire protection systems. Carpani says around 80 funding requests for more complex and structural interventions await approval from the ministry, so “it is still too soon to draw up a preliminary budget”.

However, it is clear that the private non-profits dedicated to Venetian heritage have an important role to play. An umbrella association of 21 organisations from 11 countries works in dialogue with the city and church authorities to co-ordinate funds for restoration projects.

Save Venice has raised €500,000 since the 12 November flood, says Melissa Conn, the director of its Venetian office. Half of this has already been allocated to the Ca’ d’Oro, the Venice conservatory, ten churches including the Torcello basilica, the Jewish cemetery on the Lido and the Scuole of San Giorgio degli Schiavoni and San Giovanni Evangelista.

The fundraising campaign of another US-based organisation, Venetian Heritage, attracted donations from the luxury brands Bottega Veneta and Pomellato—both aimed at restoring St Mark’s basilica. But the money will not only benefit the iconic venues, says Venetian Heritage’s director, Toto Bergamo Rossi. “For example, we will use €40,000 from the Cologni Foundation to restore fan coils and plasterwork at the Cini Foundation.” Ultimately, he hopes to “collaborate with the other committees to channel funding into even bigger projects”.

The president of the French Committee for the Protection of Venice, Jérôme-François Zieseniss, admits that fundraising in the light of the stalled construction of the city’s multi-billion-euro flood barriers has not been straightforward. The committee is planning a “symbolic” donation of €30,000 to St Mark’s basilica. “The scandals… have unfortunately sent the world a message of corruption and incompetence,” Zieseniss says. But with leadership from the culture minister and the mayor, he believes there is now “a real determination to react and to turn the city into a positive paradigm for the future”.