Work on the battle-scarred 39 sq. m Papal feast scene, housed in a monastery in Vicenza, should be completed by early 2021 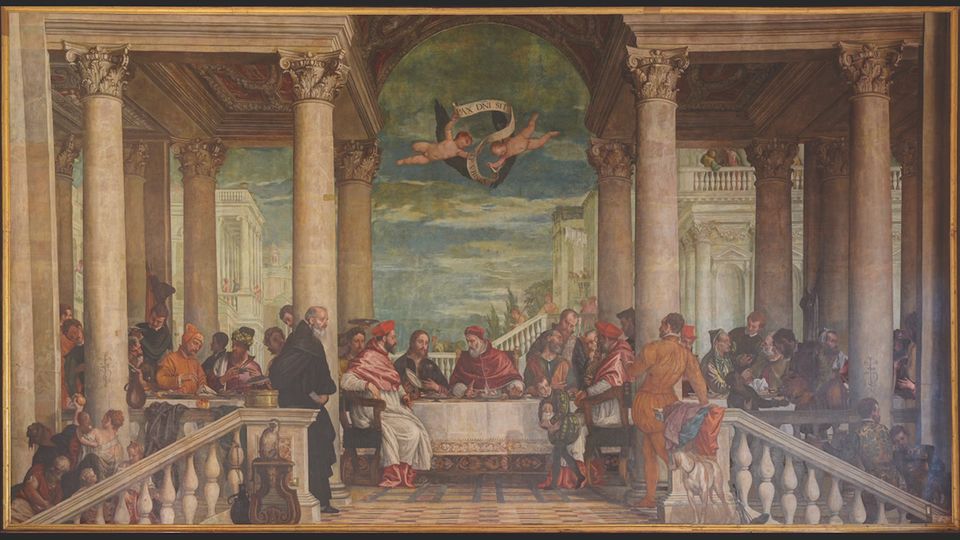 The Feast of Saint Gregory the Great (1572), slashed into 32 pieces in 1848, is to be restored for a fourth time Courtesy of Intesa Sanpaolo

Recovered after Napoleon’s Italian art raids only to be slashed into 32 pieces by Austrian soldiers during the 1848 First Italian War of Independence, Paolo Veronese’s banqueting painting for the monastery of the Madonna of Monte Berico in Vicenza has had a turbulent conservation history.

The Feast of Saint Gregory the Great (1572) depicts Pope Gregory I dining with a dozen poor pilgrims, including Jesus in disguise at his right-hand side. It is the only one of Veronese’s series of monumental supper scenes still displayed in its original setting, the friars’ former refectory. There it will be analysed and cleaned from September to early 2021, in a restoration sponsored by the Italian banking group Intesa Sanpaolo. The bank describes the collaboration as a “birthday gift” to the city of Vicenza, where Intesa Sanpaolo’s art conservation programme, Restituzioni, was launched in 1989.

Veronese’s painting technique “has not been studied in this pure way before”, says Valentina Piovan, the conservator overseeing the treatment on behalf of the local heritage authorities. The battle-scarred 39 sq. m canvas will this month be removed from the wall so specialists can work on it.

An initial analysis in 2017 revealed a “thick layer of discoloured varnish” which currently “compromises the integrity of the entire depiction”, Piovan says. But before the surface dirt and old varnish can be cleaned away in the new year, her small team will use non-invasive infrared and ultraviolet imaging to reconstruct the phases of Veronese’s creative process.

X-ray fluorescence and gas chromatography will further help conservators understand the chemical composition of the pigments, binding agent and “mestica” (primer), used by the artist.

A key challenge will be distinguishing between Veronese’s hand and the work of the painting’s past restorers: Antonio Florian in 1817, Andrea Tagliapietra in 1858 (financed by the Austrian emperor Franz Joseph I, by way of compensation for his troops’ vandalism) and Antonio Lazzarin in 1973. “My aim is to pinpoint who did what, to decide whether to remove it or leave it be,” Piovan says.

The guiding philosophy, however, will be for a “minimum of intervention”, she says. Nineteenth-century repairs made with oil-based pigments are not only difficult to reverse with modern water-based solvents, but can now be considered “a coherent part of the work” in their own right.

The delicate final phase of the project will involve retouching in such a way as to “imitate the granular texture of the painting”, Piovan says. “If it’s [too] smooth, you will see all the lines of the cuts in the light.”