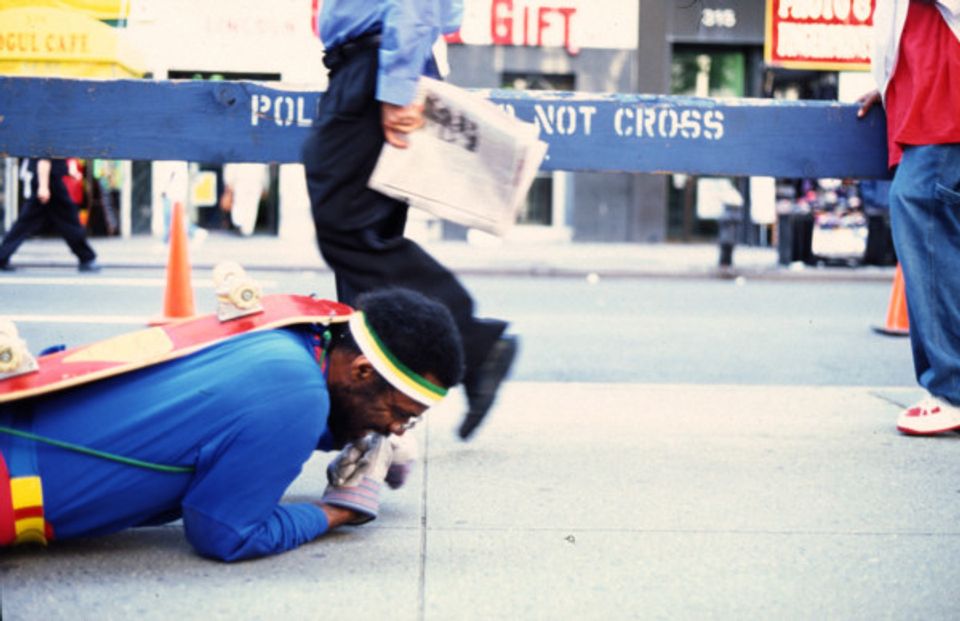 The artist Pope.L, who has a trio of shows opening this autumn at three major New York Museums, will put out an open call this month for 100 volunteers to take part in a 1.5-mile performative crawl across the city, presented by the Public Art Fund on 21 September. The volunteers, to be chosen by Pope.L to reflect the city’s diversity with resident from all five boroughs of different ages, races, and socioeconomic backgrounds, will take turns crawling along a relay route from the West Village through the triumphal arch in Washington Square Park to Union Square, a regular site for public protests. “The crawl is an absurd journey to an uncertain goal,” Pope.L says in a statement. “The raw physical struggle of the journey suggests homelessness and a loss of hope and status but takes place in a tree-lined upscale environment where wealth, speed, and verticality are king. What sort of progress is this performance? Is it a comedy of errors or business as usual or a critical mirror held up to a great American past-time called success?”

The performance, titled Conquest, brings the ideas of social privilege and political advantage into a physical and symbolic struggle. Participants will crawl with props, including a blindfold and flashlight according to a release, and will be asked to crawl with one shoe. Pope.L, who has staged many similar grueling journeys during his career, will walk alongside the performers, giving support as needed. “Working at the margins of the mainstream art world for decades, Pope.L has created a profound and compelling body of work unlike that of any of his contemporaries,” says Nicholas Baume, the Public Art Fund’s director and chief curator, in a statement. “As an epic group undertaking, Conquest promises to extend the richly layered metaphors around race, power and vulnerability in his solo crawls to further explore diversity, collectivity, struggle and achievement.”